Accessibility links
For Some Ohio Students, Less Play On Snow Days Modern technology is dashing students' hopes for the beloved snow day this winter in western Ohio. The Mississinawa Valley School District is testing electronic days, or e-days, where students will go online for lessons when school is closed because of inclement weather. Students will now have to learn something more than how to make a snowman. 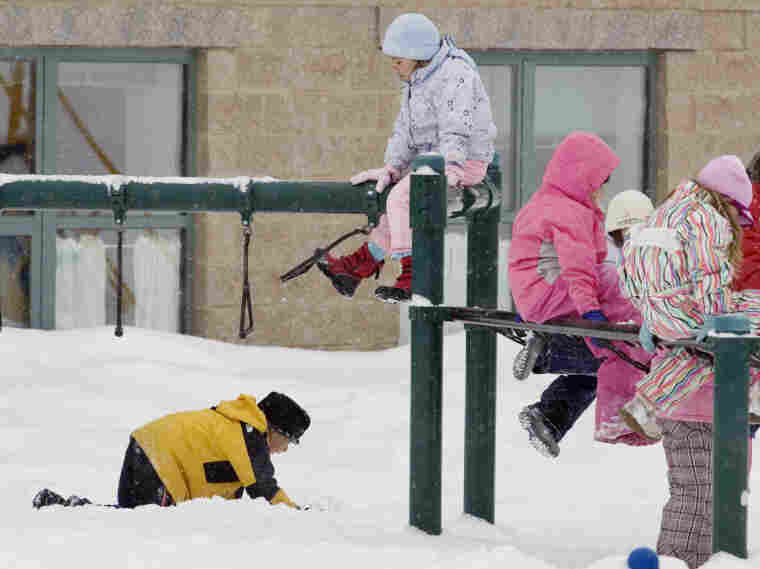 Students play in the snow in Crested Butte, Colo. A school district in western Ohio is replacing "snow days" with "e-days." Now when school is closed for inclement weather, students will have to log on to their home computers to complete virtual lessons prepared by their teachers. Nathan Bilow/AP hide caption

If you live in snow country, think back for a moment on what it was like to have a snow day -- going sledding, making snow angels and snowmen.

Kids today do that, too, but they also are probably spending their time on the computer. That's one reason that this year a rural school district in Ohio is the first in the state to try online classes when school is canceled because of the weather.

The Mississinawa Valley School District on the Ohio-Indiana line typically gets a lot of snow each winter. Ohio allows only three days of missed school, but last year the district had nine days, which students had to make up in June.

Wendel says now instead of a snow day, it's an "e-day," or electronic day. She says teachers have already created the lessons and students will access them from a home computer. Students who do not have a computer have two weeks to complete the lesson.

For most students, snow days are beloved, surprise vacations from schoolwork. But does the introduction of virtual lessons mean they won't have time to play outside in the snow?

"Oh, for heaven's sake, yes, they're going to get to play," says Sheila Scholl, a third-grade teacher in the district. "It's not like we're saying, 'No, you can't go outside and play in the snow.' I'm going to be outside playing in the snow."

Scholl says that she's also going to be at her house, ready for students who can call her with questions if they do not understand their virtual lesson.

Teachers may be the biggest fans of e-days, but kindergartner Bryson Rehmert is not fazed by the new encroachment on his day at home. On snow days, he says he usually goes outside to play in the snow with his father, and if the snow is not too deep, he rides his four-wheeler.

"I'm going to [go outside and play] for a minute, and then I'm going to go inside and turn on the computer," Bryson says.

Many of the older students at Mississinawa Valley High School seem to share some enthusiasm for the idea. Senior Jordan Wicker says it's better than making the days up in June, when it's hard to stay inside.

More From NPR On Snow Days

"At first, I was kind of like, are you serious? Because what kid wants to do homework on a snow day?" Jordan says. "And then actually if I think about it, it's actually not a bad idea. The last thing you want to be worried about [during senior year] is falling behind in the class."

But for sixth-grader Kaine Daniels, the news of working on a snow day is tragic. "I think it may be good for teachers, but not so much for kids," Kaine says.

If this winter delivers on the promise of snow, students like Kaine will have to suffer through it, at least for this year. Mississinawa Valley School District is partnering with an area university to study the effectiveness of the program and will decide whether to continue e-days instead of snow days.