Accessibility links
In Malaysia, Web's Popularity Breaks A Grip On Power More than half of the country has access to the Internet, and the government has pledged not to censor the Web. The result: Use of the Internet has been essential in breaking a half-century-old monopoly on power by the ruling coalition. 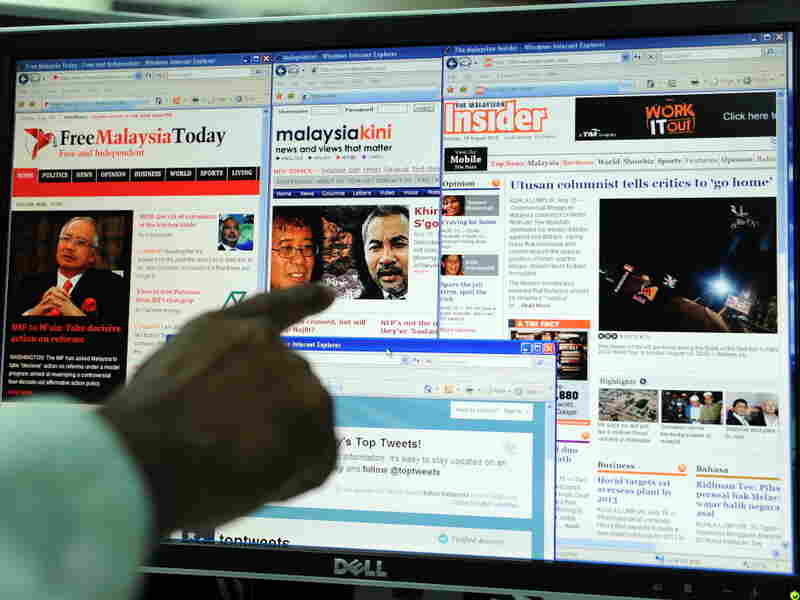 A computer user in Kuala Lumpur points to local news portals on the Internet. Malaysia's government controls the print media, but news is reportedly free online -- a factor that has altered the balance of political power in the nation. Saeed Khan/AFP/Getty Images hide caption 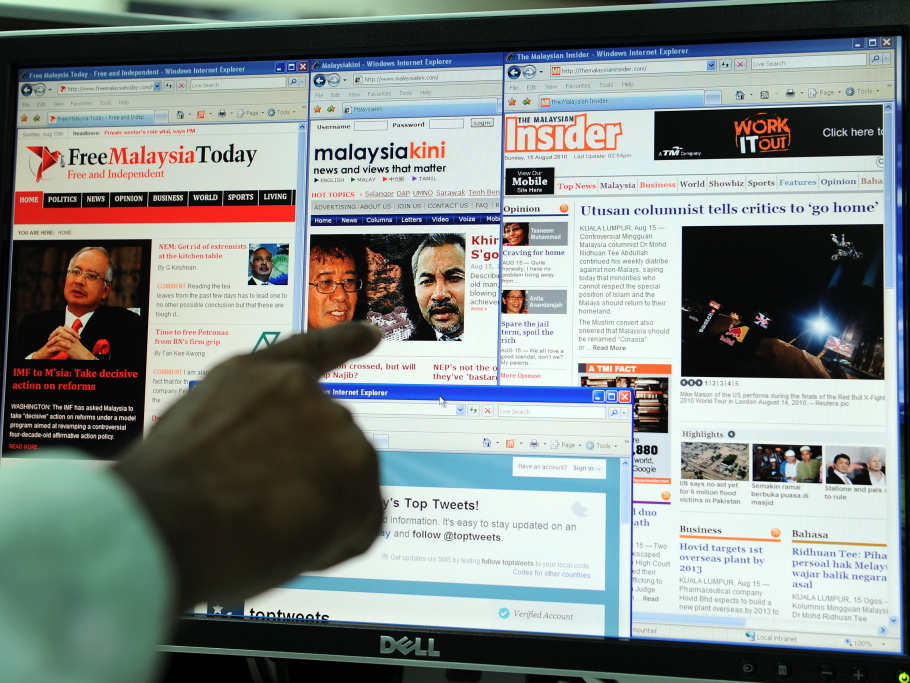 A computer user in Kuala Lumpur points to local news portals on the Internet. Malaysia's government controls the print media, but news is reportedly free online -- a factor that has altered the balance of political power in the nation.

In established democracies, the Internet has become a powerful political tool used for mobilizing, fundraising and advertising. The Internet has taken on an important but different role in emerging democracies, such as Malaysia, where its use has been essential in breaking a half-century old monopoly on power by the ruling coalition.

When mainstream media will not or cannot cover important political stories, many Malaysians click toward Malaysiakini, or Malaysia Now, the nation's most popular news website.

"We came about mostly because of the fact that we were unable to get a print license," recalls Malaysiakini editor Steve Gan. "To do print, you need to get a license from the government, and that license is renewable every year, which puts a lot of print publications on a pretty short leash. And the license is only given to people who are friendly to the government."

Malaysiakini quickly made a name for itself by daring to write about the politics of race and religion in Malaysia, areas where Gan says few conventional media dare to tread.

"We've been told time and again by the ruling coalition that all these issues are sensitive issues," he says, "[that] it shouldn't be debated and discussed out in the open, it should be discussed behind closed doors by the ruling parties, and they will come up with solutions."

Azmi Sharom, a legal scholar at the University of Malaya in Kuala Lumpur, says blogs were essential in helping the political opposition seize a two-thirds majority in parliament from the ruling Barisan Nasional, or National Front coalition, in Malaysia's 2008 general elections.

"It was the primary method with which opposition views were distributed," he says. "It was the only method where criticism of the government could be expressed freely."

Malaysia's online news scene owes its dynamism to several factors. First, more than half of Malaysians have access to the Internet. Many young Malaysians are used to getting their news online, and not from traditional news media.

And the government has pledged not to censor on the Internet. Ironically, it was former Prime Minister Mahathir Mohamad, who had a reputation as an authoritarian, who made the pledge as part of an effort to attract investment to a hi-tech "multimedia super corridor."

Sharom argues that the credit for this goes to foreign investors, not the former prime minister.

"He wanted to create a cyber hub, another one of his grandiose plans which I don't think has taken off," Sharom says. "But thankfully for the rest of us, as part of his plans, he had to give in to international demands that there be no Internet censorship."

One of the more successful critics of Malaysia's media establishment was blogger Jeff Ooi. He parlayed that success into becoming an opposition member of parliament.

Ooi says he was inspired by former San Jose Mercury News tech-beat writer Dan Gillmor, who has written about independent citizen journalists and their competition with mainstream media. Ooi insists that his reformist message -- not being a blogger -- got him elected.

"Blogs have become a commodity," he observes. "Now you have to brand yourself through your content and through your viewpoints of what you can do to fire the imagination of the people for change."

In other words, the message still counts more than the medium. Besides, Ooi points out, the ruling coalition may be behind the curve, but the coalition parties are learning now, and building up their own contingent of online scribes to battle the opposition bloggers -- issue by issue -- as news breaks.