Accessibility links
Born In The U.S.A.? Some Chinese Plan It That Way An increasing number of mainland Chinese women are traveling to the United States to give birth. Anyone born on U.S. soil has the right to U.S. citizenship, according to the 14th Amendment. And for about $15,000, that trip is a bargain for wealthy Chinese. 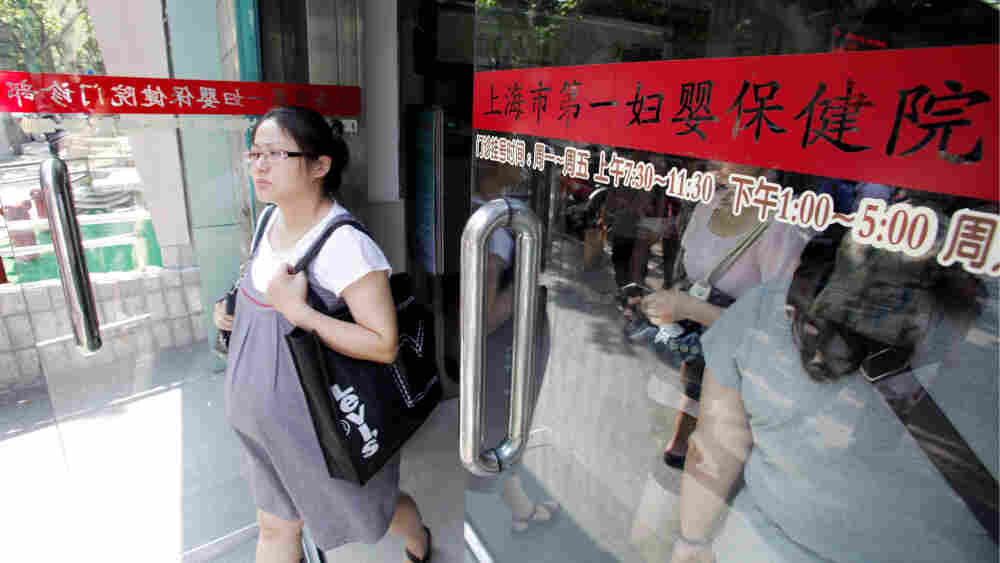 A pregnant Chinese woman walks out of a hospital in Shanghai. In a growing trend, affluent Chinese women are coming to the U.S. to give birth so that their offspring will be American citizens. For about $15,000, middlemen can arrange the hospital, the doctor and the house and car rental, as well as other extras. Qi Yunfeng/Imaginechina via AP hide caption

Like any responsible pregnant woman, Chen Lei (not her real name) wants the best for her unborn child. She and her husband live in Shanghai; both work for a foreign IT company, and they have more choices than their parents' generation could even dream of.

So Chen, 30, is one of an increasing number of mainland Chinese women who are taking advantage of a loophole in American law to travel to the United States to give birth.

"Most Chinese women who go to the U.S. to give birth do so for their child's future, for the education, and for the work possibilities. And that's true for me, too," says Chen, who is cautious and does not to want to reveal her identity.

"We just want to give him more choices in life," Chen adds.

Her unborn child -- a boy -- will have more choices than most Chinese babies. In a few weeks' time, she will board a plane for Los Angeles, where she plans to give birth in an American hospital. 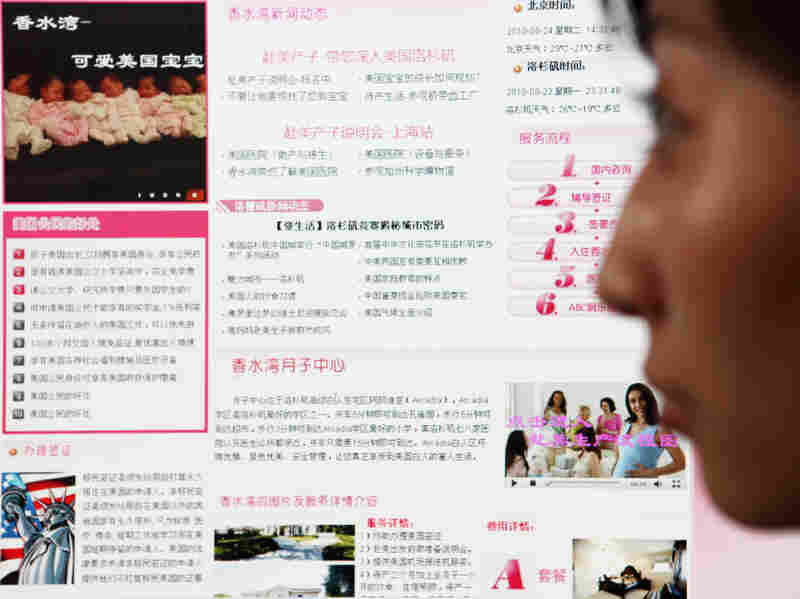 A Chinese woman in Shanghai browses the website of a specialty tourism agency that helps Chinese expectant mothers travel to the United States to give birth. Zhou Junxiang/Imaginechina via AP hide caption

According to the 14th Amendment to the U.S. Constitution, anyone born on U.S. soil has the right to U.S. citizenship.

Originally ratified in 1868 to guarantee citizenship rights to freed black slaves, the amendment has been controversial more recently in the American public political debate because of poor, illegal immigrants from Mexico and Central America coming to the U.S. and giving birth. An estimated 340,000 of the 4.3 million babies born in the United States in 2008 were the children of undocumented immigrants, according to an analysis of Census Bureau data by the Pew Hispanic Center.

There is another group of people arriving in the United States to have children. But this group comes legally, often in first-class airline seats: mainland China's upper class.

A whole host of middlemen have sprung up in China to facilitate the booming trade, foremost of whom is Robert Zhou, a Taiwanese businessman.

For roughly $15,000, his company can arrange the hospital in Los Angeles, the doctor, the house and car rental, and any number of other extras for wealthy Chinese parents-to-be.

For lots of Chinese people now, $15,000 is very affordable. And it's still at least four times more expensive for a foreign student to study at an American university than it is for an American student. With a U.S. passport, there are no barriers for study or for work.

Robert Zhou, a Taiwanese middleman who helps wealthy Chinese women go to the U.S. to give birth

"What I'm trying to do is to help Chinese mothers to realize their American dream, at a fair and reasonable price. We're not encouraging pregnant women to go and get a U.S. visa. We say that if you already have a U.S. visa, and you're pregnant, you can take the opportunity to give birth in the U.S. So yes, it is a gray area in U.S. law," Zhou says.

Anti-immigration activists in the U.S. say the 14th Amendment was never meant to be applied this way. The Department of Homeland Security and the State Department have no specific regulations regarding pregnant foreign visitors like Chen.

Zhou insists his clients obtain U.S. visas themselves before they even approach him. He says they are paying for everything themselves, and not being a burden on U.S. taxpayers.

Even though there are many opportunities in China, Zhou says, there's no doubt access to a free U.S. public school education, and reduced college costs that come with being an American citizen, are worth the investment. Children who go back to China with their parents can later return to live with relatives already in America, establishing residency and taking advantage of state-supported schools.

"For lots of Chinese people now, $15,000 is very affordable. And it's still at least four times more expensive for a foreign student to study at an American university than it is for an American student. With a U.S. passport, there are no barriers for study or for work," Zhou says.

Zhou has helped as many as 600 mothers give birth in the U.S. in the past five years. Some are doing so to skirt China's strict one-child law, which doesn't apply if a child is born to Chinese parents outside China.

When they've gotten a taste of American life, Zhou says some people do want to emigrate. But the majority of parents, like Chen, don't want to move to America themselves at all.

"We work in IT, and for people like us, it's better to stay here in China. We have a great quality of life here, so there's no reason for us to move," she says.

There is one other advantage of giving birth in the U.S., Chen says.

Last Christmas, she went to a conference in Las Vegas and bought eight pairs of designer shoes, for about $200 each, half the price they cost in China. She is going to Vegas again, she says, to do some serious shopping, before she gives birth in the new year.