Accessibility links
Stephen Sondheim Talks To Frank Rich About 'Glee' And What's Next In a wide-ranging public conversation, Stephen Sondheim tells former New York Times theater critic Frank Rich why he loves Glee and explains how he came to write the lyrics for West Side Story.

Stephen Sondheim Talks To Frank Rich About 'Glee' And What's Next

Stephen Sondheim Talks To Frank Rich About 'Glee' And What's Next 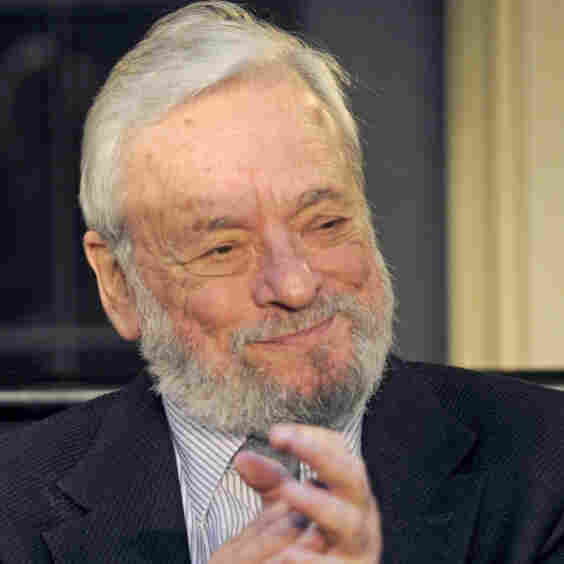 The sweaters were a nice touch. Last night, as part of The New York Times’ Times Talk series, Frank Rich sat down for a public, ninety minute chat with Stephen Sondheim. The two are old friends as well as lions of the American theater -- Rich was the Times' chief theater critic before he tackled the op-ed page -- and watching them banter could have been intimidating. Instead, the event was warm and relaxed. Both men wore avuncular sweaters and spoke to each other like brunch buddies who were considerate enough to explain their private jokes to the rest of the listening restaurant.

Sondheim’s been opening up to everyone this year. In the spring, he gave candid video interviews that were integrated into the Broadway revue Sondheim on Sondheim, and he just published Finishing the Hat, a collection of lyrics and anecdotes that finds him dishing on everyone from to his ninth grade Latin teacher to Oscar Hammerstein.

The Times Talk was just as meaty. For instance, Rich asked how Sondheim ended up writing the lyrics for West Side Story, his breakthrough hit, when the gig was intended for Betty Comden and Adolph Green. Turns out, the duo was committed to a Hollywood contract, and since Sondheim had been schmoozing Arthur Laurents (who wrote the libretto) just a few weeks before, he got invited to meet the creative team. "I wasn’t really interested in writing lyrics," Sondheim said. "What I wanted to do was meet Leonard Bernstein."

Rich also asked about the current Broadway revival of West Side, which will close in January after almost 800 performances. Initially, Laurents, who directed, inserted Spanish lyrics into songs like "I Feel Pretty" and "A Boy Like That," thinking they would reflect the show’s Puerto Rican characters. Audiences got restless, however, and about eight months in, the English text was restored. "We assumed that everyone had seen West Side Story and seen the movie of West Side Story and would know what those songs were about," Sondheim said. "They didn’t."

For some, it’s chilling to imagine audiences who don’t know that show, and Sondheim acknowledged that no one seems to have a theatergoing habit anymore. Later, though, he said he found solace in Glee, which has featured his music.

"It's terrific," he explained. "Glee is a mix of contemporary songs and show tunes in the service of joy."

Later, Rich read an audience question asking whether Sondheim ever hesitates to write a new show, since everyone will judge it against his masterpieces. "The expectation is a great deterrent," he said. "It’s very hard to ignore it. But you know, I’ll overcome that. When you have something you want to write, you just write it."