Accessibility links
China's 'Little Emperors' Lucky, Yet Lonely In Life A world with no siblings is the reality for tens of millions of young urban Chinese, born since the one-child policy was introduced in 1976. Now, they are dealing with unique challenges when it comes to their own relationships and families. 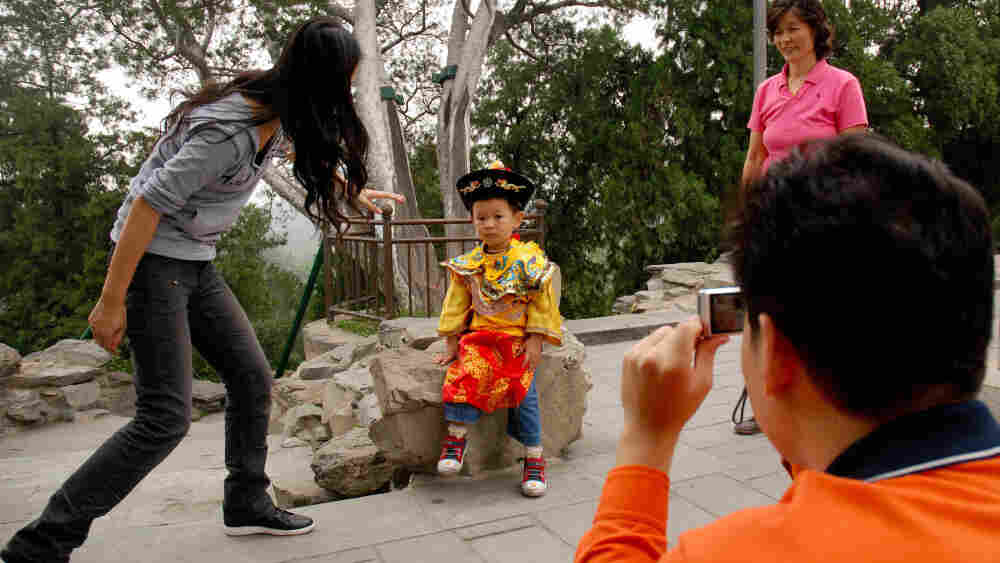 A Chinese family coaxes their son to pose in a "little emperor" costume at a park in Beijing last year. China introduced its one-child policy for urban Chinese in 1976, resulting in a generation of sibling-less offspring. Wang Zhao/AFP/Getty Images hide caption

Imagine a world where no one has siblings. That's the reality for tens of millions of young urban Chinese, born since the one-child policy was introduced in 1976.

This has led to a cosseted generation of singletons nicknamed the "little emperors."

In her book I Am Not Happy: The Declaration of an '80s Generation Only Child, author Liu Yi summed up their pain and pleasure: "We are the unfortunate ones, because we are only children. Fate destined us with less happiness than children from other generations. We are also the lucky ones -- with attention from so many adults, we skip over childish ignorance and grow up. Simple-minded, we are unable to see the realities of life, and the lack of burdens denies us depth."

Center Of The Universe

A 2005 survey by the Internet portal Sina of about 7,000 respondents between ages 15 and 25 found that 58 percent of one-child respondents admitted being lonely and said they were selfish. But many also revel in being the "sun" around whom the household revolves. 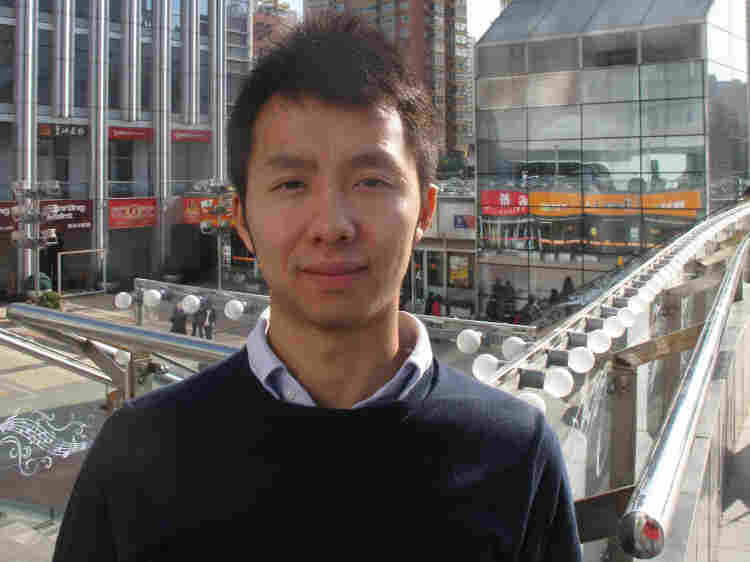 A.J. Song, 23, is the only child in his family, which is from a small village in Guizhou province. Song says his parents gave him everything, and his cousins, most of whom have siblings, are very jealous of him. He says he probably would not be living in Beijing if he had had to share his parents' attention and resources. Joe Xu for NPR hide caption

"I really appreciate [being the] one child, especially from the countryside," admits 23-year-old A.J. Song, whose parents are from the Gelao minority in Guizhou province.

Other Chinese research finds advantages to being an only child: They tend to score higher on intelligence tests and are better at making friends, according to Chinese studies.

Song agrees, saying he believes only children care more about their friends. He says the extra investment parents make in an only child is significant.

"If I had a sibling, I probably wouldn't be who I am now. Probably I'd still be in my small village, getting married and having kids. If you have more kids in your family, probably they're lacking in education, lacking food, lacking any kind of support, no matter emotional or financial. Basically everybody is going to be average," he says.

Instead, Song -- single and with no children -- lives in Beijing, and he is proud of the fact that a kid from his small village can make it in the city.

Others disagree with the "little emperor" stereotype. Research by Toni Falbo at the University of Texas found that only children in China scored better at verbal tests, but when it came to personality traits showed very few "only-child effects."

Many of the pressures suffered by China's only children come from living in an extremely competitive society, where access to educational resources -- especially the best kindergartens and schools -- is limited. 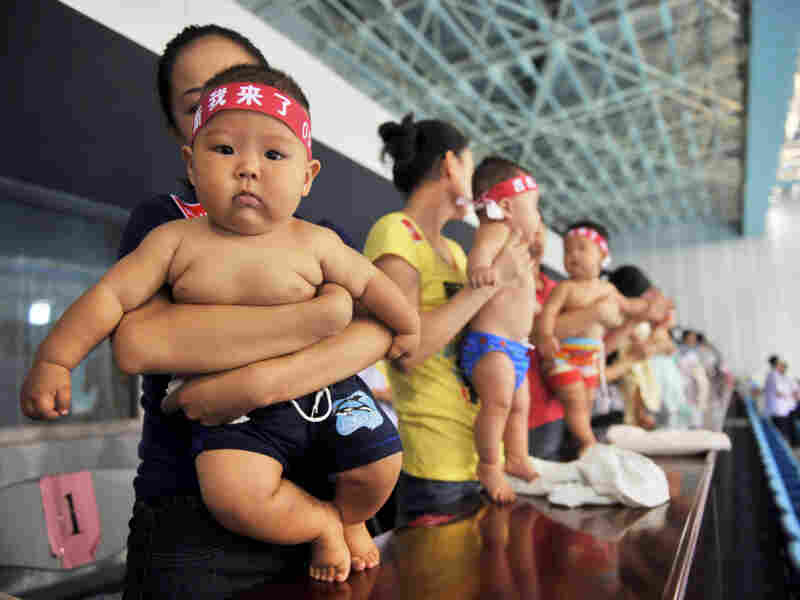 Hundreds of Chinese babies prepare to participate in a swimming contest in September in Beijing. In China, children with no siblings often find concession difficult to deal with, since their parents traditionally give in to their demands. AFP/Getty Images hide caption

"Every kid in China has that kind of pressure," says 22-year-old Jing Jing from Ningxia province, who now works in public relations. "[Parents and grandparents] really want their kids to be great."

For her, that meant two hours of homework a night, followed by three hours of piano practice and Chinese painting to set her apart from the herd.

"When other kids are playing, I have to play piano and do all this stupid painting. I was sad and angry," she says, although now she appreciates the pleasures of music.

China's single-child generation is now struggling with relationships and marriage. One in five marriages ends in divorce, double the figure a decade ago, and figures are expected to go up.

Concession is alien to only children, Jing admits. "You never compromise to your parents, and your parents let it go," she says, meaning that Chinese parents traditionally let their demanding only-children get their way.

For many young Chinese, sharing a dorm room with other students at university constitutes the first real experience of sharing and a battleground for those who have never learned the art of compromise.

"We had a really important problem," Jing says. "Someone in my dorm room wanted to play computer games from 8 p.m. to 2 [or] 3 a.m. We talked to her several times, but we didn't really solve the problem." 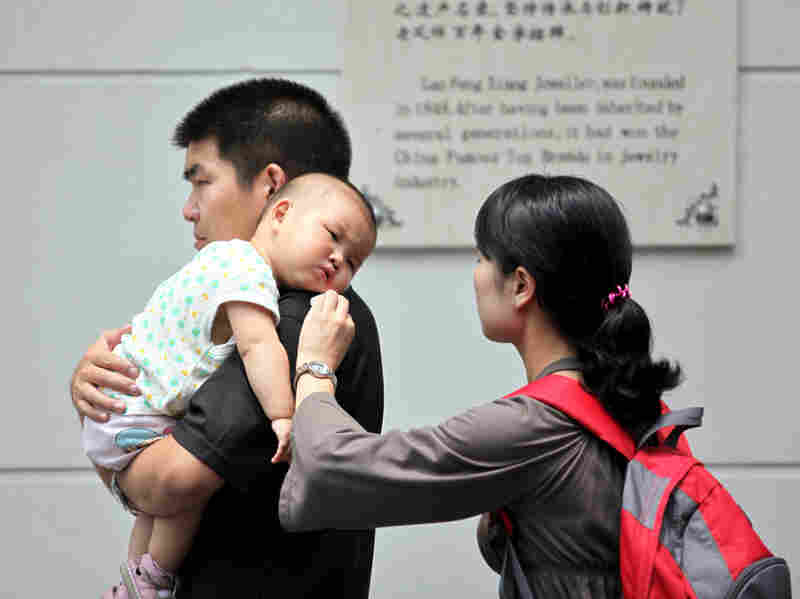 A 2008 study found that  61 percent of the singleton generation surveyed -- about 3,000 people born between 1976 and 1986 -- was hoping to have two kids, and 38 percent was hoping to have just one. Qi Yunfeng/Imaginechina via AP hide caption

Many of China's singletons say they yearned for siblings when they were younger. Song begged his parents for a baby, and Jing dreamed of a sister.

"Of course, I want to have a big sister. I'm selfish, and I want to have someone to take care of me. At my age, I only have my friends. Sometimes I can be really jealous. I think, 'We are the same age, why can't I be better than you?' But if I had a sister, she would be my role model," Jing says.

The Next One-Child Generation

Now, members of the one-child generation are having kids themselves and facing the practical calculations of feeding and clothing their offspring.

According to China's prestigious Academy of Sciences, which in 2008 carried out the first survey on the only-child generation's views of love, marriage and education, 61 percent of the singleton generation surveyed -- about 3,000 people born between 1976 and 1986 -- was hoping to have two kids, and 38 percent was hoping to have just one.

But that's not the full story. In China's material society, money is all. Another survey question gives perhaps a truer answer: Despite their hopes, and perhaps facing the material reality of life in modern day China, 65 percent of respondents admit that "one child is enough."

Even Jing, whose dream it was to have an older sister as a protector and role model, admits she's considered the financial ramifications of siblings.

"Some of my friends, their grandparents had a lot of money but after they died their uncles and parents are fighting for that money. As I'm the only child, I don't need to worry about that," she says. "But if I had a sister, maybe I'd fight with her for the money, maybe."