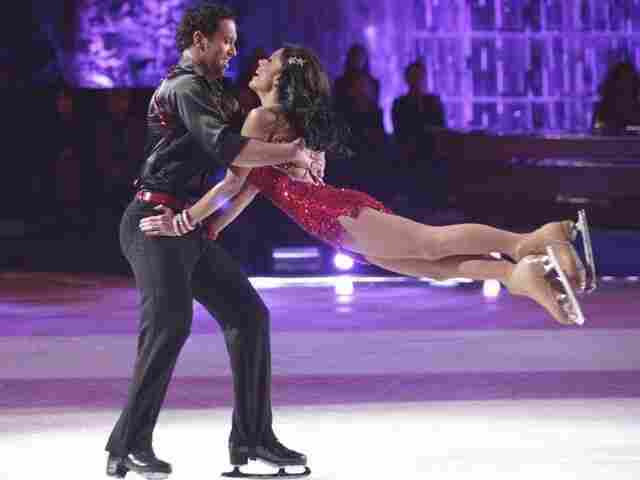 Ethan Burgess and alleged celebrity Bethenny Frankel (The Real Housewives Of New York City were among the competitors on the first night of Skating With The Stars. Adam Taylor/ABC hide caption

This is not actually a surprise. The public was asked this question a few years back and provided exactly the same answer. In early 2006, Fox's Skating With Celebrities flopped spectacularly despite pairing its minor personalities like Full House's Dave Coulier and Deborah "Debbie Gibson" Gibson with actual famous ice skaters like Nancy Kerrigan and Kurt Browning. (This was undoubtedly the worst thing to happen to Gibson since someone broke the news that she wasn't the one who sang "Could've Been," that was the other one.)

That's right. Before Skating With The Stars, there was Skating With Celebrities. You would think the fate of one might be interpreted as an indication of the likely fate of the other. Ho-ho-ho, that's why they don't let you make TV.

For whatever reason, ABC concluded that Fox was simply ahead of its time when it sent Coulier and Kerrigan out to duet on "Soul Man" and Bruce Jenner and Tai Babilonia to skate to "Up Where We Belong" while Jenner wore a white Navy outfit. (This is a moment that YouTube tragically cannot offer you, which is one of the rare wrongs that YouTube has ever done me. Imagine my fists shaking as I look at the sky and bellow, "JENNNEEEEEERRR!")

Anyway. For some reason, ABC believed, it could go farther with such luminaries as Vince Neil and Bethenny Frankel than Fox did with Jenner and Kristy Swanson (the original movie Buffy The Vampire Slayer, who actually used this otherwise completely inconsequential show to vault herself into a massive public scandal).

So last night, ABC pulled out all the stops, using the TV scheduling equivalent of the Pamchenko Twist by clinging to Dancing with all sorts of flying, twirling, grabbing maneuvers. For one thing, the network set a Skating start time of 9:13 p.m. Changing the channel in the middle of a half-hour like that is designed to be pointless. You're already behind! You've missed half of Two And A Half Men! You'll never understand the plot and characterizations now! Might as well watch the skating show!

Nevertheless, Sadness On Ice is a flop out of the gate. This despite the fact that they did not even put a commercial in between the close of Dancing and the start of Skating. No, they actually followed Vernon Kay, the comically doofy (there is simply no other word) host of Skating, as he took the handoff from Dancing host Tom Bergeron and strolled from the Dancing set to the Skating set.

The network could not have begged viewers to stay any more forcefully if it had taken a cue from The Ring and arranged for a very personal visit to each individual household, if you know what I am saying. And it still didn't work.

We, the audience, have spoken, for good or for ill. We enjoy skating. We enjoy minor celebrities. We enjoy people falling down. We enjoy pratfalls. We enjoy sparkle pants. We enjoy whirring blades. But for whatever reason, we are not interested in people we have only vaguely heard of when they are gliding gracelessly across the ice.

Bad skating doesn't work in this particular market. Doesn't matter why, doesn't matter who, doesn't matter what they like in Canada. (I love you enough to deck my locks with maple leaves for you, Canada, but you are not a good indicator of what skating content will fly down here, ratings-wise.)

Please: never make another celebrity skating show. Nobody is going to watch it. I have the pitiful promotional Skating With Celebrities earmuffs from 2006 that serve as a painful, synthetic, probably highly flammable reminder that we have walked this road before, the road of watching people fall down, and while it certainly seems like something we would watch, we don't. We just don't.

But it wasn't. So stop trying.