Accessibility links
Thanksgiving Dinner With A Lighter Touch The holidays are a time of tradition, especially at the dining table. But America is a nation of blended tastes, so there's also room to experiment, right? Try this veggie-centric fare — simple in ingredients yet rich in flavor and substance — and you'll never miss the gravy.

Thanksgiving Dinner With A Lighter Touch

Thanksgiving Dinner With A Lighter Touch 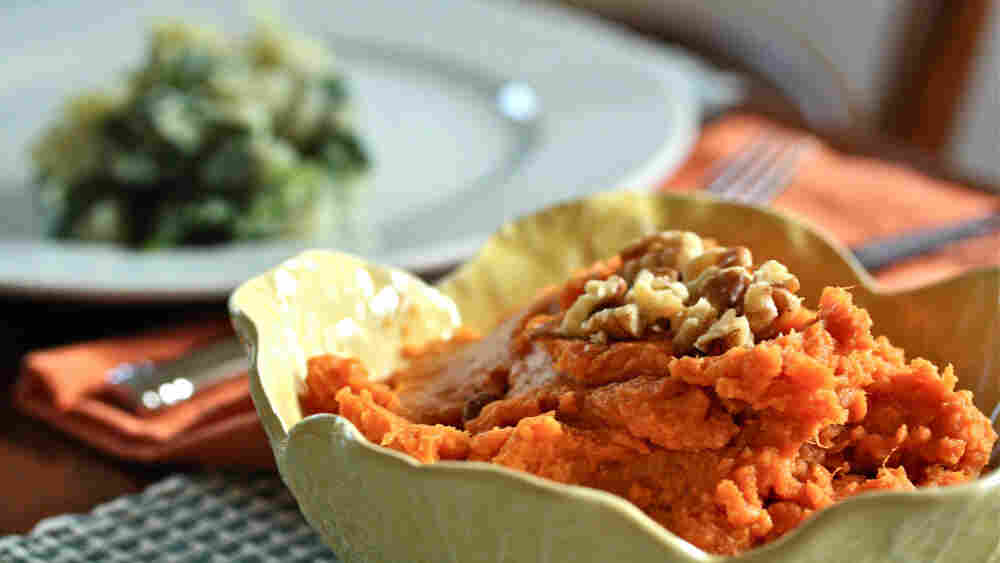 On a Sunday morning a few weeks before Thanksgiving, there's a distinct chill in the air at the farmers market. Despite San Francisco's recent mercurial weather, fall is definitely here at last. The vegetables heaped before me are the only evidence I need: Brussels sprouts still on their stalks lean against baskets spilling over with creamy cauliflower, piles of butternut and acorn squash threaten to roll off the tables, fat bunches of beets rest comfortably alongside buckets of potatoes.

I wander, clutching my cup of coffee, and I plan. Thanksgiving is nearly here, and I am nearly ready. I've written up menus. I've made lists. Visions of upside-down cranberry cake, apple pie with a brown-sugar crust, phyllo and roasted vegetable "lasagna," cauliflower-pear puree, and mashed potatoes with olive oil and sauteed greens drift through my mind. I can't wait to get into the kitchen.

Know your diner. While there are those who will happily bite into tofu laced with miso broth served atop a pile of lightly curried quinoa and never miss the bird, there exist equally as many who would feel keenly the omission of mashed potatoes smothered in rich gravy ...

But hang on a minute — mashed potatoes with greens and olive oil? Phyllo-vegetable lasagna? Cauliflower puree? For Thanksgiving? Isn't that boring health-food stuff?

Well ... not exactly. I'm all for the tried-and-true holiday fixins. (Well-salted mashed potatoes with a lot of cream? Homemade macaroni and cheese? Yes please.) But even more, I'm all for experimentation. The early settlers may not have had access to phyllo pastry, but I have a feeling they would have approved — America is, after all, a nation of blended tastes.

For me, Thanksgiving is about gathering my loved ones together to sip and sup, to take a few hours to really savor and appreciate our food. If I'm cooking, I want my dishes to be simple in ingredients yet rich in flavor and substance — special, yes, but not because they're bound to harden your arteries.

This is certainly possible — even easy — to accomplish.

In recent years, I've trended more toward a bit of butter rather than lashings of it. Let's say I'm a traditionalist at heart who likes to put her own twist on things.

I'm also a vegetarian — although I might be, gulp, cooking the turkey this year — but even if I weren't, I'd still laud the vegetable side dishes simply because they're so very good.

Then there's the health issue to consider: Not a few of my loved ones grapple with high blood pressure, high cholesterol or weight gain, require lower-fat fare or simply don't want to leave dinner feeling overstuffed. A holiday table groaning under the weight of generously buttered green beans or a butternut squash soup that's two parts cream to one part squash may prove too daunting.

So when I cook my Thanksgiving feasts, I usually prepare dishes that are a bit on the lighter side yet still satisfy a longing for those classic dishes we know and love.

One thing I've learned: Know your diner. While there are those who will happily bite into tofu laced with miso broth served atop a pile of lightly curried quinoa and never miss the bird, there exist equally as many who would feel keenly the omission of mashed potatoes smothered in rich gravy or a very sweet sweet potato casserole. We are so often creatures of habit and tradition.

I've found that sweet potatoes mashed with vegetable broth and a drip or two of sesame oil and sprinkled with toasted walnuts or pecans (or try candied nuts, to up the sweetness a notch) are spooned up greedily even without the marshmallows. Mashed potatoes whipped by hand into creamy splendor need only the flavor of good olive oil and sea salt (add garlic and wilted spinach, too) to pack a nutritional and rich-tasting punch. It goes without saying that I like to incorporate as many vegetables as possible, adding an extra handful of chard here, a scoop of pretty, maple syrup-infused butternut squash there.

Don't be afraid to get creative (though perhaps test out new ideas beforehand if possible). I'm not advocating eschewing fat and dairy altogether (Thanksgiving is, after all, one of our most decadent holidays), but don't be afraid to cut down dramatically. The wonderful thing about vegetables in their purest form is that they taste of themselves. Why cover up all that goodness?

Good vegetable broth and herbs — fresh or dried — are your allies here. A splash of cream (or milk) at the end of the cooking process (think a velvety pumpkin-leek soup made with a sparing addition of olive oil, with about a tablespoon of cream slipped in just before serving) adds a hint of richness without being cloying. Lean heavily on the delicious, natural flavor of the vegetables — and if you're like me, you'll want to retain a certain crunch — to make your creations addictive.

As usual, come Wednesday night, I'll probably be up to my elbows in flour, busily tucking apples sweetened with maple syrup into a flaky olive oil crust. I'll be sauteeing countless leeks and cubing squash in preparation for the next day. I'll be tired — though happily so — and around dinnertime Thursday, it will all be worth it.

Thanksgiving is about celebrating the harvest and the gifts it gives us. Let the market be your guide, and if you like, experiment with unexpected flavor combinations (I've been itching to try soy sauce-braised Brussels sprouts served with a lemony tahini sauce). You may cut back on a few calories, but you definitely won't sacrifice taste.

The holiday is also about breathing deeply and savoring the moment — being grateful simply to be. Well ... that, plus a healthy serving of vegetables. I have a lot to be thankful for this year.

I dearly love mashed potatoes; I also dearly love my greens. Cooked together with a healthy helping of garlic (or leeks, if you're so inclined), you'll not miss the butter and cream. 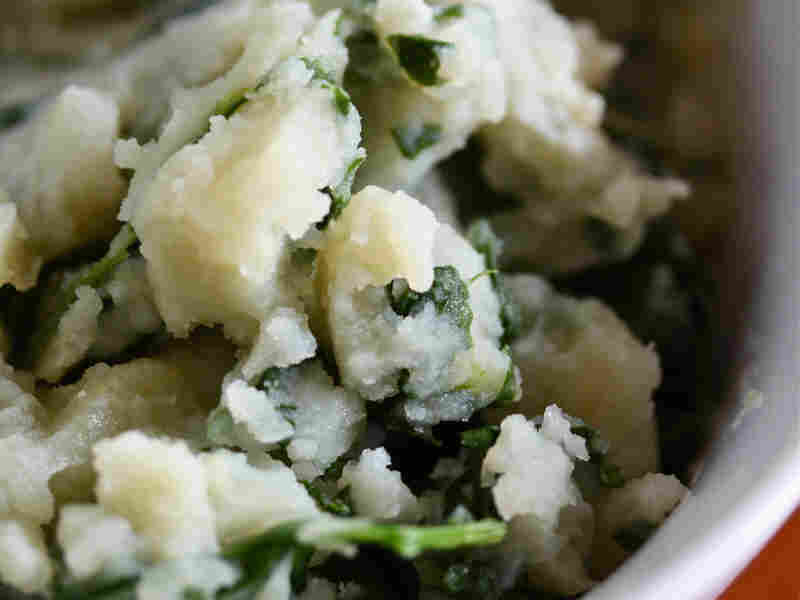 3 pounds potatoes, peeled and cut into large chunks (I like Yukon gold)

1 teaspoon salt (or to taste)

Put the potatoes in a large pot and cover with water. Bring the water to a boil, and boil for 20 minutes, or until potatoes are tender.

Heat 2 tablespoons of olive oil in a large skillet over medium-high heat. Add the garlic, chopped greens and 1/2 teaspoon salt, and saute until tender, about 3 minutes. Set aside.

Mash the potatoes with a potato masher. Stir in 1/2 cup of vegetable broth and the remaining 3 tablespoons olive oil. Add the remaining salt and the pepper.

Stir in the sauteed greens and garlic. Stir in the rosemary. Add a bit more vegetable broth if potatoes seem too dry.

A healthier -- and simpler -- twist on the traditional green bean casserole. If you can, make this right before serving so it's still hot and crackling when you bring it to the table. 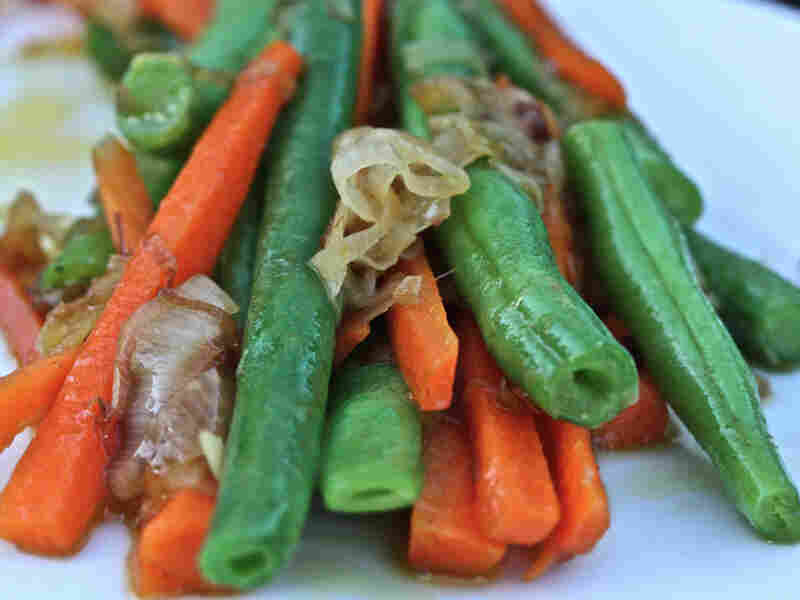 Cut off and discard ends from shallots. Cut shallots lengthwise in half, remove peel with paring knife and chop thinly. Heat olive oil in a heavy, large skillet over medium-high heat. Add shallots and saute 1 minute. Reduce heat to medium-low and saute until shallots are browned and tender, about 20 minutes.

Add green beans and carrots to shallots in skillet and stir over medium-high heat until heated through, about 6 minutes. Sprinkle with thyme. Season to taste with salt and pepper.

If the thought of pear cooked with cauliflower sounds a bit too strange, omit it, though it does add a touch of unexpected fall sweetness to the plate. A cauliflower puree may be served instead of potatoes if you're looking for a lighter dish than mashed potatoes. 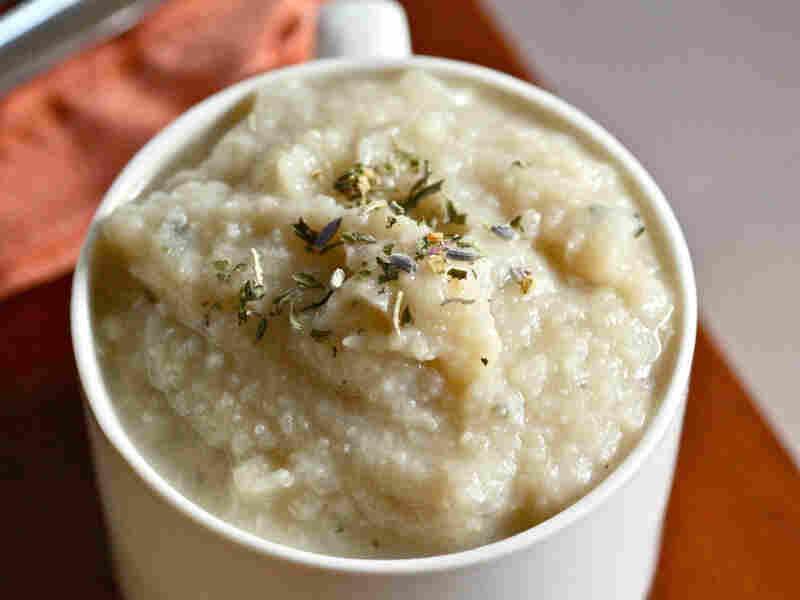 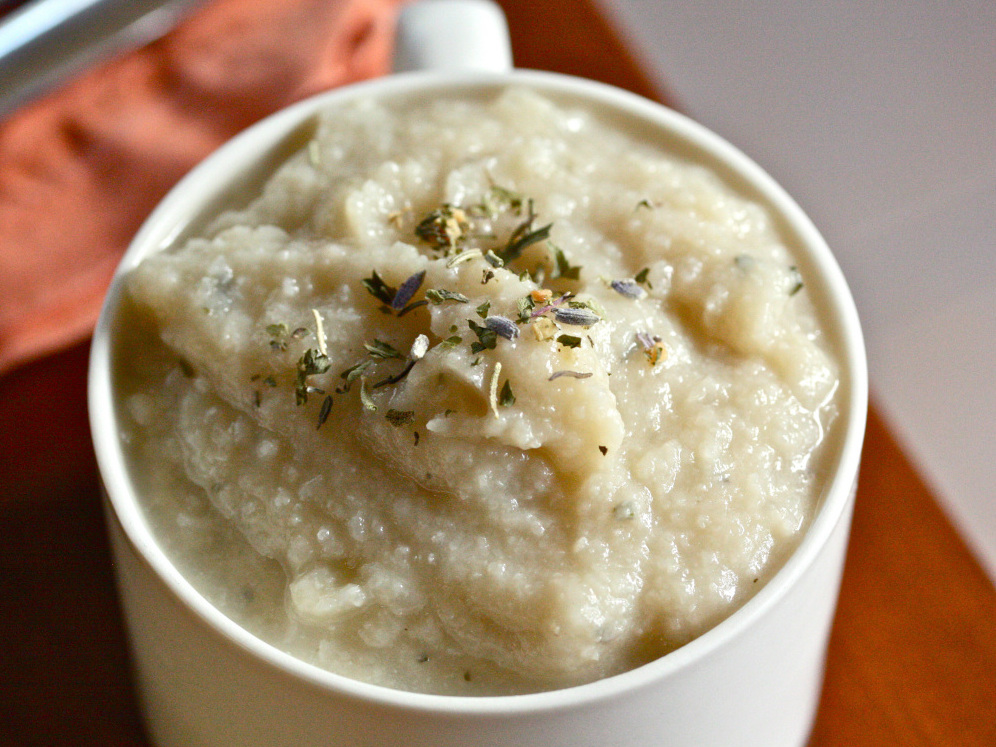 In a medium saucepan over medium heat, saute the leeks in the olive oil until soft, about 5 minutes. Add 1 cup vegetable broth, 1 cup water and the cauliflower, and bring to a boil. Reduce heat and simmer until cauliflower is tender, about 15 minutes. Add the pear and simmer another 2 minutes.

Drain the leeks, cauliflower and pear. In a bowl using a hand blender, or in a blender, puree the mixture with about 1/4 cup of vegetable broth until very smooth. Add more broth if necessary for texture. Add the herbs and stir well. Add salt and pepper to taste.

This is in no way a substitute for the traditional Thanksgiving sweet potato casserole, but it's one of my favorite ways to eat sweet potatoes any time of the year. The sesame oil adds a rich, nutty undertone to the sweetness that's echoed by the toasted nuts sprinkled on top. You may use more or less sesame oil to your taste. 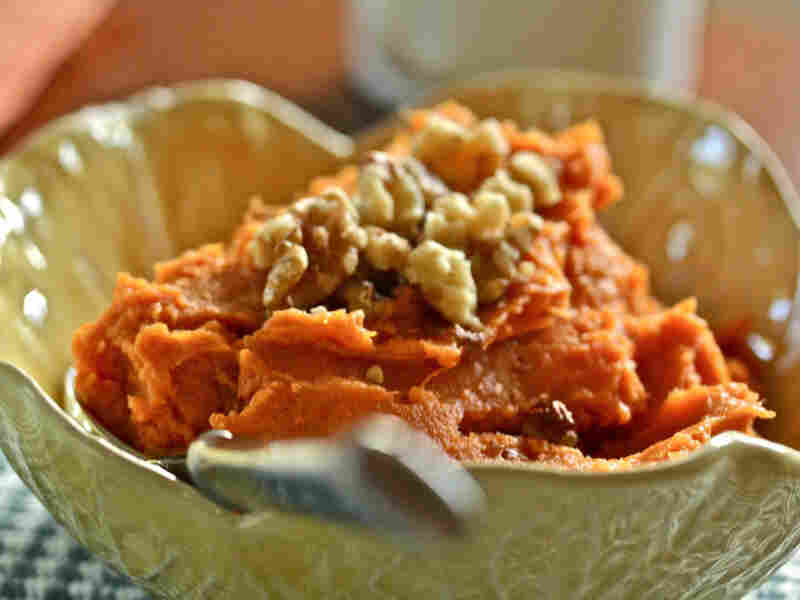 Place the sweet potatoes in a large pot, filling the pot with water to cover the potatoes by about an inch. Bring to a boil, then reduce to a simmer until the potatoes are tender, 15 to 20 minutes. When sweet potatoes are tender, drain and place in a bowl. With a potato masher, mash the potatoes until they are fairly smooth but still chunky. Add broth, soy milk or milk and stir well. Add the sesame oil a tablespoon at a time, tasting for flavor and consistency (you want them silky, but not pureed). Add more or less oil depending on your taste, stirring well to combine all of the ingredients. Stir in the heavy cream. Salt to taste.

Before serving, sprinkle the toasted nuts across the top of the sweet potatoes.

Inspired by my mom, this is a wonderful vegetarian entree for the holiday table -- the 'lasagna' is hearty from the portobello mushrooms, lightened up by the flaky phyllo pastry, and gives a nod to decadence with the hint of melted Gruyere cheese. 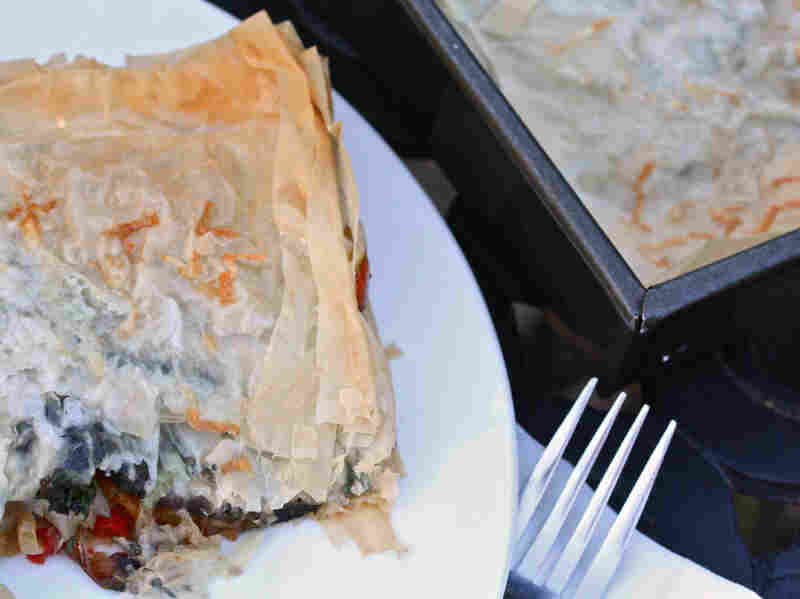 5 ounces Gruyere cheese, or to taste

In a bowl, combine the peppers and onion and toss with 1 tablespoon olive oil and salt and pepper to taste. Roast for about 30 minutes, until peppers and onions are soft, and their edges slightly blackened. Set aside. Meanwhile, clean and slice the portobello mushrooms into 1/4-inch strips. Heat 1 tablespoon of olive oil in a frying pan over medium heat and saute until soft. Set aside.

Lightly grease a 9-by-12-inch pan with olive oil. Place one sheet of phyllo on the bottom of the pan and, dipping into the remaining 1/4 cup of olive oil, brush lightly with oil. Repeat with four more sheets, brushing each with olive oil.

Cover the pan of phyllo with tin foil, and bake for 20 minutes. Remove the foil the last 3 to 4 minutes so it becomes very lightly browned. Watch carefully, as phyllo browns very quickly.

Let the lasagna rest about 5 minutes before serving.

I've long been a fan of the olive oil crust and use it whenever I bake pies. Here, maple syrup-sweetened apple slices are the perfect finish to any holiday meal. They taste completely of fall, and bring the outside in. 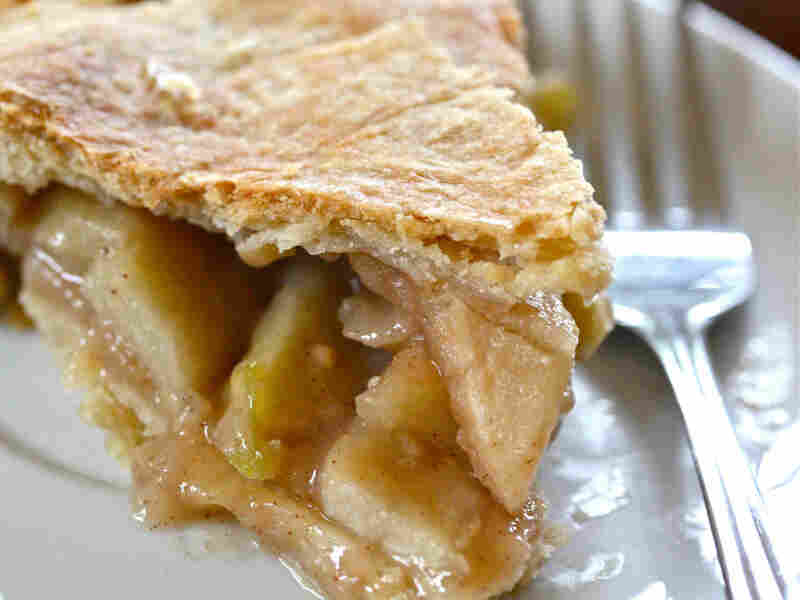 For the filling, in a large bowl, combine the flour, cinnamon, ginger, nutmeg and cloves. Toss the apples with the dry mixture. Drizzle in the maple syrup and toss well to coat with the syrup and flour.

Place pan on a cookie sheet to catch any drips and place in oven. Bake 10 minutes, then lower heat to 350. Bake for 35 to 40 minutes, until crust is lightly browned and filling is bubbling. Remove from oven and let rest about 15 minutes before serving.