Accessibility links
Parents, Coaches Worry About Concussion Risks The new focus on the risks of concussions among NFL players has sparked concern for young athletes, too. Research shows that girls are more likely than boys to land in the emergency room with concussions from playing soccer or basketball.

Student athletes are bigger and stronger than they were a decade ago, and they play rougher. The increased concern about concussion risks in NFL players has parents, coaches and doctors worried about the risk of head injury in kids' sports. Concussions are now the second most common injury in kids' sports, and there's some evidence that girls may be more likely to end up in the emergency room than boys. 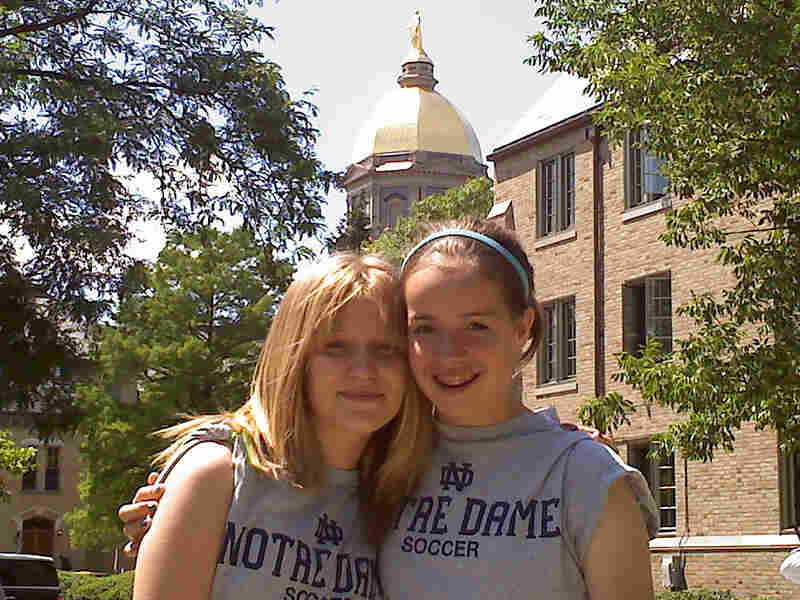 Megan Lindsey learned the hard way about concussions. The 14-year-old freshman suffered concussions twice this fall while playing soccer for a club team in East Lansing, Mich. On Sept. 19, while playing goalie in an important match, Megan had dived to stop a ball when the play went wrong: The offensive player's cleats hit Megan smack in the face. She had a concussion, too, but at the time that didn't seem like such a big deal.

"All I could really think of was how much pain it was on my face," she says.

Her parents took her to the doctor, and she was soon cleared to get back in the game. But three weeks later, on Oct. 9, she got clobbered again. Same scenario: A girl was coming toward her, and Megan went out, got the ball, and went down.

Megan's mother, Barbara Wirtz, couldn't see clearly from the sidelines. But it was clear that something was terribly wrong: Megan was unconscious. "Her lower body was shaking," Wirtz says. "And then when I got closer, I could see that her upper body was shaking as well."

Wirtz rode in the ambulance to the hospital, where doctors tested Megan's reaction time and awareness. She was diagnosed with a seizure and a concussion, and sent home. This time around, though, Megan didn't bounce right back.

Though she went back to school that Monday, she had trouble with the light and noise in the cafeteria, and trying to watch a movie in class gave her a headache. Her friends told her she wasn't always thinking or speaking clearly. "I would say something and would think it made sense," Megan says. "But my friends would look at me like I was some crazy person."

Rebounding From The Concussion

Concussions used to be described as a brain bruise, but doctors now like to say that it's a problem with the brain's function, a problem that can't be detected by MRI or CT scan. When the brain suddenly slams to a stop, the brain's neurons all fire at once. That surge of energy temporarily messes up the brain's electrical and chemical signal system, making it hard to think straight.

Megan's parents took her to see Jeffrey Kutcher, a neurologist at the University of Michigan who specializes in treating sports concussions. He was especially concerned because multiple concussions greatly increase the risk of permanent brain damage. He told her the only way to recover from a concussion is to rest. So Megan dropped soccer, and saxophone. She cut way back on schoolwork. She even gave up texting.

Kutcher asked Megan to work on strengthening her neck and torso, with the idea that that might make her less likely to get knocked around. And he gave her a plan to ease back into exercise, starting with slow walks.

Until very recently, parents, coaches and players were often clueless about the risk of concussion -- "getting your bell rung" and getting back in the game was admired as "playing tough." Some school districts and sports leagues have started to make concussion awareness training mandatory, but many do not. The federal Centers for Disease Control and Prevention has launched a nationwide awareness effort called Heads Up, which aims to make it clear that anyone who is even suspected of having had a concussion needs to get out of the game and go to the doctor. Congress is in on the act, too.

Earlier this month, the American Academy of Neurology recommended that any student athlete suspected of having a concussion be removed from play and evaluated by a health professional experienced in managing concussion. Student athletes should be cleared by a doctor before returning to play.

But some schools are trying to do a better job of monitoring student athletes by taking a page from the NFL's playbook. Last year, Churchill High School in Potomac, Md., started assessing student athletes' memory and reaction time with the online ImPACT test, the same test used in the NFL, to see how their brains work.

"If there's a potential concussion and they retest, we look for abnormalities," says Dave Kelley, the athletic director at Churchill. "If they perform poorly on memorization or don't react as quickly, that may show signs of a brain injury." Kelley has benched eight or nine students in the past 18 months whose second tests suggested a concussion.

Back In The Game

In Michigan, Megan Lindsey is on the move again. Her doctor just gave her the green light to increase her exercise. Her parents want her to hold off on soccer until the new year, and Megan says she might not play goalie when she returns, but she's excited at the prospect of returning to a sport she loves.

"Today I'm actually able to do the workouts I was doing beforehand," she says. "So I think progress has been made!"

Megan's parents support her wish to get back in the game, though they're being cautious and thinking long term. And Kutcher says parents shouldn't keep kids out of sports because of concussion risk. "You let kids be kids," Kutcher says. "Ultimately there will be some injuries. But we don't have to worry about every little hit, every little bonk on the head. We should take the necessary precautions, but not wrap up our kids in bubble wrap."