Accessibility links
A 'Modern Family' Fueled By Sibling Fodder Screenwriter and producer Steven Levitan has made a career of family sitcoms. His latest project is Modern Family, a warm-hearted comedy with a bit of edge. Levitan says he takes many of the show's conflicts straight from his own kitchen table. 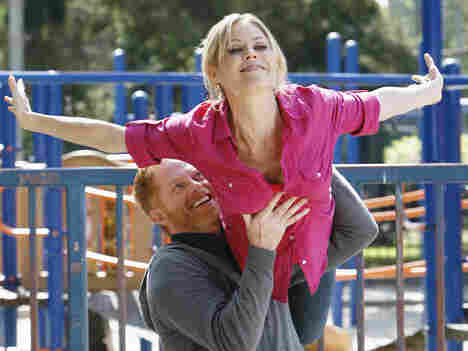 In a bright, 1970s living room, a towheaded school girl flops on the couch bemoaning the fact that her older sister always wins the praise.

"All I hear all day long is how great Marcia is at this or how wonderful Marcia did that," Jan Brady whines to her parents. "Marcia, Marcia, Marcia!"

The Brady Bunch isn't the only sitcom to make use of siblings' tug and pull relationship. Married with Children, The Cosby Show and The Simpsons are just a few television shows that followed suit.

ABC's Modern Family -- now in its sophomore season -- continues the tradition of sibling-fueled sitcoms. It's the latest from Steven Levitan, who co-created and executive produces the show. Levitan has made a career of family comedies. He wrote his first spec script for The Wonder Years and later wrote for Frasier in the 1990s.

"What makes siblings so rich for television," Levitan tells NPR's Renee Montagne, "is the fact that they can be very different, but they're stuck together." Writers can create characters who are really at odds, with wildly different personalities, jealousies and fierce competitions. "The audience isn't asking, 'Why are these two people staying together?' "

Watch A Clip From 'Modern Family'

Modern Family follows three interconnected families. There's the older father (Ed O'Neill of Married With Children fame) who remarried a younger Colombian woman; his daughter Claire, who's married with three kids, and the gay son Mitchell, who has just adopted a baby from Vietnam with his partner. The show has enjoyed consistently high ratings and the praise of critics. It took home several Emmy awards this year, including a surprise win for Best Comedy.

Levitan says Claire and Mitchell's adult sibling relationship is especially good fodder for comedy, because of the raw nerves and baggage grown-ups tend to carry around from childhood. In one episode, Mitchell admits to Claire that he's been upset at her for 20 years for leaving their figure skating duo "Fire and Nice" right before a championship meet. (By the end of the episode, they're acting out their old skating routine in a parking lot.)

Levitan explains that that connection to childhood is what works so well for sitcoms. "[Adults are] very productive wonderful people with their lives and they have this wonderful facade," he says. "Then they get around their families and their siblings and suddenly that crumbles and they revert to that kid again."

A Bit of Edge

In many ways, Modern Family follows nicely in the lineage of the family sitcom, but Levitan balks at the idea that his show is "innocent" in the way The Brady Bunch was. He says it's warm and has a good heart, but in the writer's room, they try to balance that with subversive comedy and a bit of edge.

He points to a moment in the pilot where the teenage daughter swears at her little brother. That was important to the show, Levitan says. "It was an immediate signal to the audience that this is not cutesy kid stuff." He says the edge gives the show a broader reach than it otherwise would have.

That sibling-swearing moment from the pilot came from Levitan's own life -- his daughter said the exact same thing to his son. Now that his three kids have seen their fictional counterparts on screen, he says they realize they're giving him material. He says he regularly gets his phone out to record or take notes during good conversations at the kitchen table. "In the middle of a huge fight," he says, "or somebody's having a breakdown of some sort, it's not rare to hear, 'Put that phone away -- I don't want to see this on the show!' "

In many ways, the sibling conflicts that take place at Levitan's kitchen table and among the characters of Modern Family, are classic sitcom fare. He says the writers on the show flag something as "fun-miliar" if it's a sweet moment that has been overdone. Then they work to see if there's a new take on it, or a way to update it for today.