Accessibility links
Foreign Policy: Making Progress In Mexico Frustration on all sides was high at last year's climate change summit in Copenhagen, and commentator Bill McKibben of Foreign Policy argues that this year's meeting in Cancun might not be any better. Might the talks be better off, he asks, without U.S. participation? 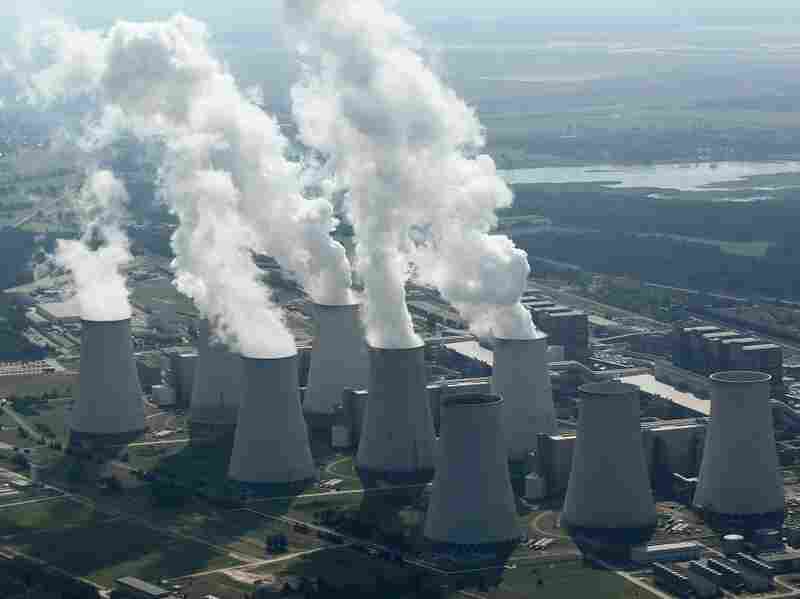 Steam rises from cooling towers at the Jaenschwalde coal-fired power plant in Germany, a large producer of CO2 gas. A summit in Cancun to address climate change and reduction of CO2 will begin on Monday. Sean Gallup/Getty Images hide caption

Bill McKibben is an author, environmentalist, and activist. He is the co-founder of 350.org, an international climate campaign.

Copenhagen, at least in winter, has a grim air -- I remember the Ferris wheel at Tivoli Garden kept spinning throughout last December's U.N. climate summit, but the wind chill factor seemed discouraging. In a season for hunkering down, the damp squib of an outcome fit the mood. Cancun, where the next U.N. climate summit starts on Nov. 29, has a slightly different feel -- "a margarita for the delegate from Denmark, senora!" -- but drinks and sunshine won't be enough to lift the mood.

Careful observers may recall that last year's conference was weighed down by the fact that the U.S. Senate had failed to act on a climate-change bill. President Barack Obama was then promising very modest carbon reductions -- 4 percent below 1990 levels by 2020 -- and he refused to go along with the better proposals coming from Europe and parts of the developing world on the premise that tough targets would be dead on arrival in the Senate. "We're very, very mindful of the importance of our domestic legislation," his chief negotiator Todd Stern said at the time. "That's a core principle for me and everyone else working on this. You can't jeopardize that."

Or, as it turns out, you can. In the event, the president decided not to commit any real political capital to the climate bill, so it died an inglorious death in the Senate in midsummer -- Majority Leader Harry Reid wouldn't even bring it up for a vote, so ugly was the whip count. So: Copenhagen flopped because the administration was waiting for the Senate, the Senate decided not to act, and now the new Senate has lots more Republicans plus one Democrat (Joe Manchin of West Virginia) whose campaign commercial showed him shooting the climate bill with a deer rifle. I suspect Obama will not be flying in for this year's conference.

In fact, I suspect it will be mostly holding pattern and very little landing in Mexico this December. The fundamental problem that has always dogged these talks -- a rich north that won't give up its fossil-fuel addiction, a poor south that can't give up its hope of fossil-fueled development -- has, if anything, gotten worse, mostly because the north has decided to think of itself as poor, too or at least not able to devote resources to changing our climate course.

It is possible -- indeed it has been possible from the start -- that this essential gulf will prevent action to slow greenhouse gas emissions at the pace that physics and chemistry demand before it's too late to reverse or contain the impacts of climate change. There's really only one way to build a bridge across the divide, and that's with big stacks of money. Theoretically, the rich countries pledged at Copenhagen that they would pony up $30 billion in "fast-start" financing to help poor countries get going on building renewable energy. And at last scrupulous count, according to the World Resources Institute, there's actually $28.34 billion on the table, more than half of it coming from Japan. Unfortunately, much of it isn't "new and additional" -- instead it's repurposed money from other development grants. None of that increases anyone's confidence in the $100 billion a year that U.S. Secretary of State Hillary Clinton projected in Copenhagen would be available by 2020 -- especially because the only news that has emerged this year as to its source is that it won't be coming from "public funds."

At Cancun, the demand from the United States and others will be transparency for access to that "fast-start" cash -- if you want financing, then you have to provide measurable, verifiable reductions in emissions. The south is desperate enough to keep the talks on track that there probably will be at least some advances on related questions of reporting, monitoring, and verification, and there might be real progress on deforestation, too. The main diplomatic effort will center on keeping the process somehow limping forward toward next year's conclave in South Africa -- everyone keeps hoping that if that happens some new opening will emerge. But if the summer of 2010 -- 19 countries setting new heat records, Russia on fire, Pakistan underwater -- didn't rattle leaders, it's not quite clear what will.

Meanwhile, recall the Copenhagen Accord, the face-saving compromise that allowed Obama in particular to frame last year's meeting as something slightly better than a complete failure. It called on countries to set voluntary carbon targets, and report on how they were doing -- a kind of AA model for international efforts in which no one commits to anything, but at least you have to stand up in a meeting and report how you're doing. The problem is, no one is standing up and pledging to go sober. At last count, if you totaled all the commitments associated with the Copenhagen Accord from all the different countries and then assume they'll actually stick to their word, the amount of carbon in the atmosphere will still more than double, and the Earth's temperature will soar way past anyone's definition of safe. As Tom Athanasiou, the relentless campaigner who runs the Greenhouse Development Rights Network, said recently: The pledge and review process is a "collective suicide" pact.

One question worth asking is: Might the world be better off -- in other words, might an international framework be within closer reach -- ignoring the United States completely? True, it represents a huge chunk of the planet's carbon emissions. But first at Kyoto and then in Copenhagen, it has used its power to argue for weaker targets (which in the case of Kyoto it then refused to abide by anyway). There's an argument for simply trying to reach a pact that looks scientifically reasonable and getting on with the job, hoping that Washington will eventually be shamed into participating (or, more plausibly, realize that it is missing the next economic revolution, the transformation to green energy). Certainly, there is no case in which the failure of American leadership and the dysfunction of the political system in Washington causes more damage than in the realm of climate change. But if the United States was out of the picture, there's no guarantee that the process would actually work much better.

The scientists have done their work by now. The planet is heating up in precisely the ways they predicted, albeit more quickly. The amount of carbon dioxide in the atmosphere edged past 390 parts per million (ppm) in the months since Copenhagen, far above the 350 ppm that researchers have set as the upper boundary for a planet that works the way we're used to. Civil society is pushing back: 350.org, the international climate campaign I co-founded, organized the most widespread coordinated political action the planet has ever seen this October, with 7,400 "work parties" (citizen groups taking action, from school-insulating teams in London to waste-land-to-veggies-gardeners in New Zealand to solar-panel installers in Kenya) in 188 countries. Sooner or later, the planet's politicians will have to respond, but at the moment, it's looking like later. They think they're negotiating with each other, but they're really dickering with chemistry and physics. And they're losing badly.