Accessibility links
DeLay To Fight Money-Laundering Conviction The former House majority leader called the verdict "an abuse of power." He faces up to life in prison after Texas jurors found him guilty of money laundering and conspiracy to commit money laundering. His sentencing is tentatively set to begin next month. 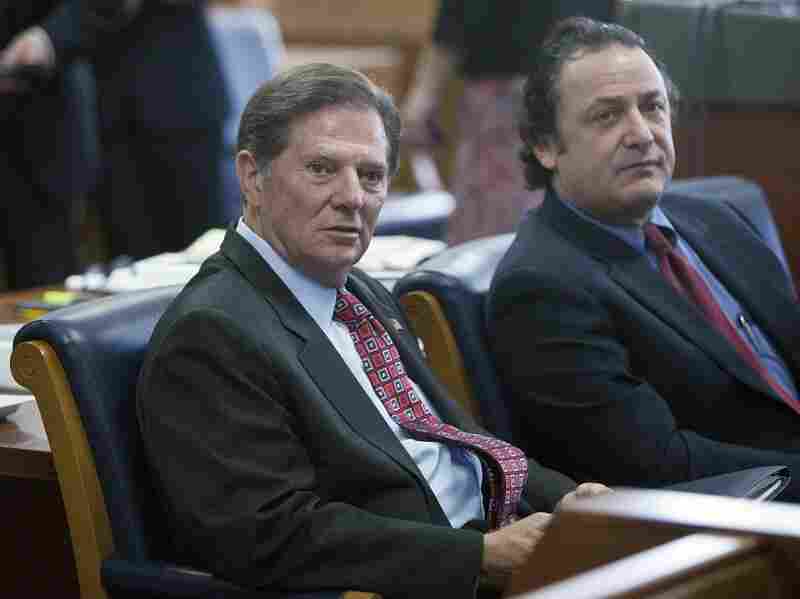 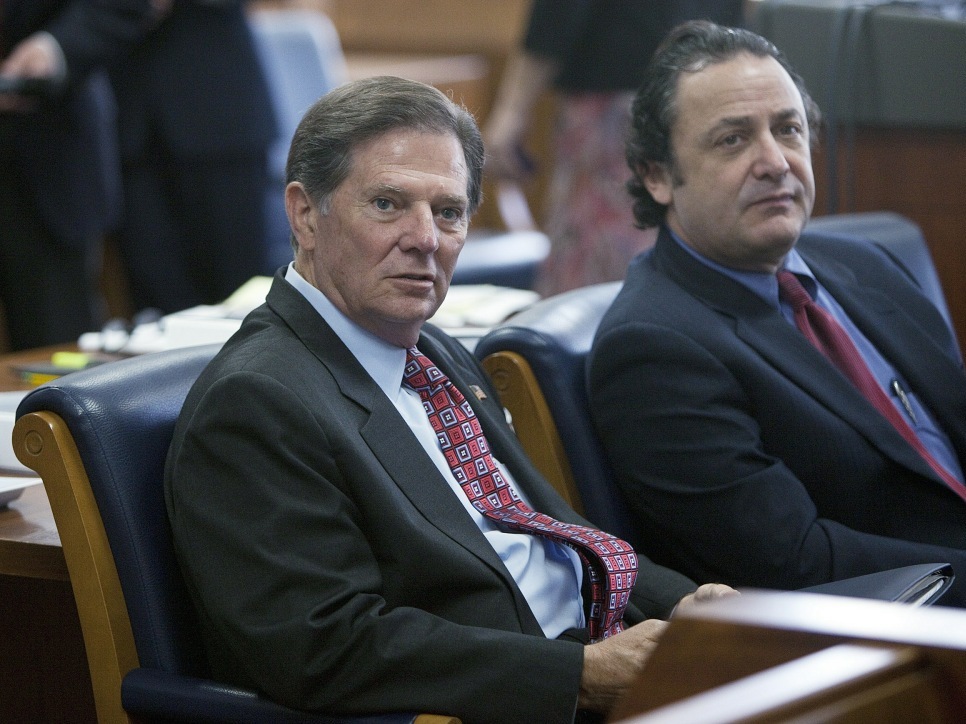 Former House Majority Leader Tom DeLay, seen here on Oct. 26, was convicted Wednesday on money laundering charges. He was indicted in 2005 on charges that he illegally funneled corporate money to help Republicans in Texas legislative races in 2002.

Former U.S. House Majority Leader Tom DeLay, once one of the most powerful and feared Republicans in Congress, remained defiant after a Texas jury convicted him of conspiracy and money laundering.

"This is an abuse of power. It's a miscarriage of justice, and I still maintain that I am innocent. The criminalization of politics undermines our very system and I'm very disappointed in the outcome," he told reporters Wednesday after the verdict was read in an Austin courtroom.

DeLay, 63, could spend the rest of his life in prison, and he made it clear that he intends to fight the conviction.

Jurors deliberated for 19 hours before finding DeLay guilty of illegally funneling corporate money to Texas candidates in 2002. After the verdicts were read, he hugged his daughter, Danielle, and his wife, Christine.

DeLay remains free on bond, and his sentencing is tentatively set to begin Dec. 20. He faces five years to life in prison on the money laundering charge and two to 20 years on the conspiracy charge. He also would be eligible for probation.

Prosecutors said DeLay, who once held the No. 2 job in the House of Representatives and whose heavy-handed style earned him the nickname "the Hammer," used his political action committee to illegally channel corporate donations into 2002 Texas legislative races through a money swap.

DeLay and his attorneys maintained that the former Houston-area congressman did nothing wrong as no corporate funds went to Texas candidates and the money swap was legal. Lead attorney Dick DeGuerin said they planned to appeal the verdict.

"His lawyer argued that … this money swap … was common practice among political campaigns and political action committees," Largey said. "So he said there was really no crime being done here."

The verdict came after a three-week trial in which prosecutors presented more than 30 witnesses and volumes of e-mails and other documents. DeLay's attorneys presented five witnesses.

"This case is a message from the citizens of the state of Texas that the public officials they elect to represent them must do so honestly and ethically, and if not, they'll be held accountable," Travis County District Attorney Rosemary Lehmberg said after the verdict.

Prosecutors said DeLay conspired with two associates, John Colyandro and Jim Ellis, to use his Texas-based PAC to send $190,000 in corporate money to an arm of the Washington-based Republican National Committee. The RNC then sent the same amount to seven Texas House candidates. Under Texas law, corporate money can't go directly to political campaigns.

Prosecutors claim that the money helped Republicans take control of the Texas House. That enabled the GOP majority to push through a DeLay-engineered congressional redistricting plan that sent more Texas Republicans to Congress in 2004 -- and strengthened DeLay's political power.

DeLay's attorneys argued that the money swap resulted in the seven candidates getting donations from individuals, which they could legally use in Texas.

They also said DeLay only lent his name to the PAC and had little involvement in how it was run. Prosecutors, who presented mostly circumstantial evidence, didn't prove he committed a crime, they said.

DeLay has chosen to have Senior Judge Pat Priest sentence him. He faces five years to life in prison on the money laundering charge and two to 20 years on the conspiracy charge. He also would be eligible for probation.

The 2005 criminal charges in Texas, as well as a separate federal investigation of DeLay's ties to disgraced former lobbyist Jack Abramoff, ended his 22-year political career representing suburban Houston. The Justice Department probe into DeLay's ties to Abramoff ended without any charges filed against DeLay.

Ellis and Colyandro, who face lesser charges, will be tried later.

Except for a 2009 appearance on ABC's hit television show Dancing With the Stars, DeLay has been out of the spotlight since resigning from Congress in 2006. He now runs a consulting firm based in the Houston suburb of Sugar Land.

"He has said in the past that he does not have any plans to mount another political campaign, but if he did, in fact, harbor any secret desires to do that, I think after today's verdict that's pretty much out of the question," Largey said.