Accessibility links
Yeonpyeong Residents Assess Damage, Future Two days after an artillery attack on the South Korean island, residents returned to gather their belongings and survey the damage. Most of the village's 1,200 residents seem to have decided en masse to flee. 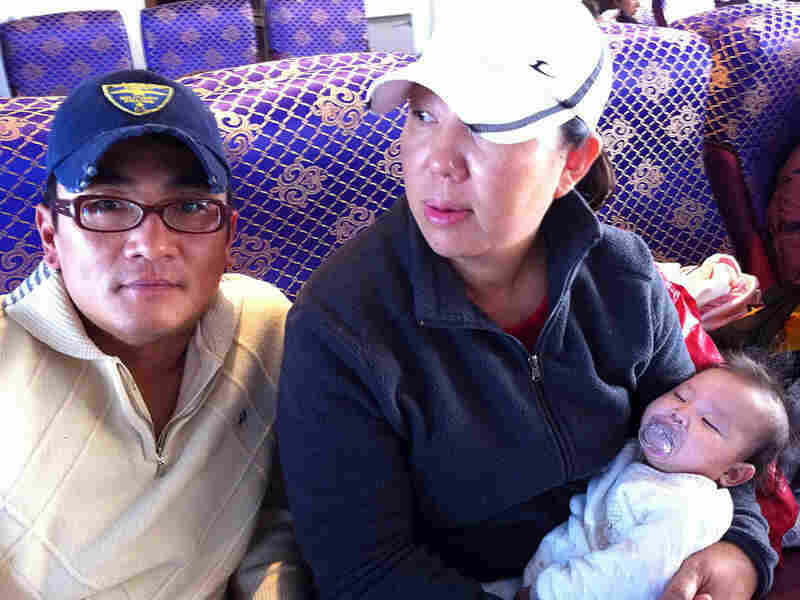 Kim Hae-jeong and her husband traveled with their baby back to Yeonpyeong to gather their belongings. The couple say they don't feel safe living on the island anymore. Louisa Lim/NPR hide caption

As officials in Pyongyang warned of more attacks -- two days ago a North Korean attack killed four people on the South Korean island of Yeonpyeong -- residents trickled back to the war-torn island to collect their belongings.

Returning home, however, is not a decision taken lightly.

Onboard a ferry, Kim Hae-jeong cradles her 4-month-old daughter, bracing herself. The whole family is going back for a few hours, against Kim's better judgment, to collect essentials for the baby.

"I was reluctant to go to the island today, but no one could take care of my baby," Kim said. "Rather than my husband going alone, I'd rather we all went together. If we're going to die, I'd rather we died together."

Kim and her family arrive on the island and walk out along the pier, which is full of soldiers wearing bulletproof vests. Security is extremely tight. The family truck is waiting at the pier, and they drive toward their home.

Yeonpyeong was once a sleepy fishing village, albeit in a frontline position -- now it's become a war zone.  Some houses are intact, while others have had their roofs blasted off and have been gutted by fire. There's broken glass underfoot and, above all, an atmosphere of pure, undiluted fear.

Trucks loaded with possessions zoom past, and the only topic of conversation is what time the last ferry of the day is leaving. Most of the village's 1,200 residents seem to have decided en masse to flee.

As a chopper flies overhead, village doctor Park Seung-chol says everyone is suffering.

"People are traumatized here," Park said. "Even us, health care professionals, we have that kind of anxiety. When we hear a little sound, we jump. And everybody on the island is the same."

Park is a reluctant holdout. He'd like to leave, but leaving isn't an option. He's chosen to work here as an alternative to military service, so he has to stay on. Park is working to set up a new medical center after the original one was damaged. It's one of the public buildings that villagers believe was targeted by the North Koreans, along with the marine base.

"The villagers were in chaos, because shells were dropping all the time," said Park, describing how it felt to be under attack. "People talk about a first wave and a second wave of attacks, but I felt like there was constant bombing. And people were coming to see me to get treatment for injuries caused from flying debris."

As the ferry sets off back to the mainland, it's packed full of refugees. They slump on their seats, exhausted from terror and uncertainty. Although their island home is just eight miles from North Korea, few imagined this day would come. 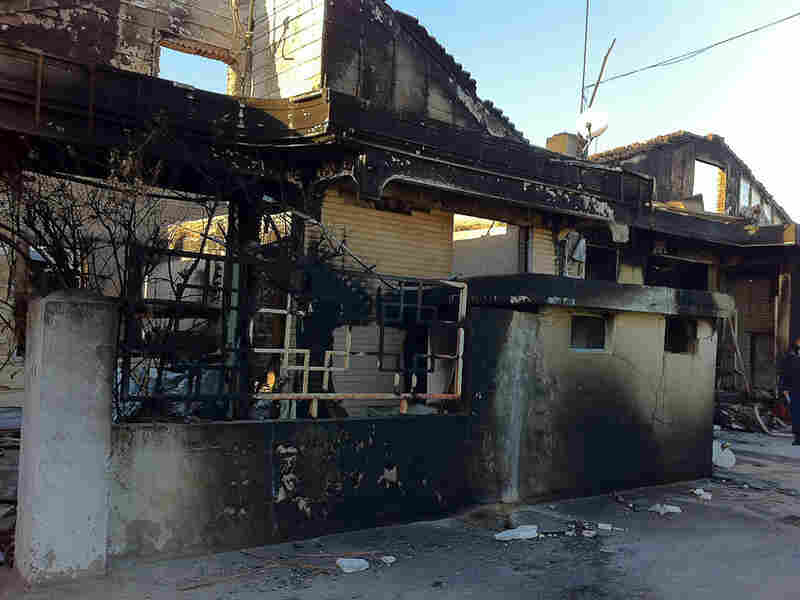 Charred remains of houses on Yeonpyeong, two days after the island was subjected to a barrage of 170 artillery shells, fired by the North Korean army. Louisa Lim/NPR hide caption

Shin Sun-ja has lived in the village for six decades. At 67, she's finding it hard to come to terms with what she's lost.

"I'm a farmer and I planted 700 cabbages this year, so I'd like to go back," she said. "But my house is next to the marine base, and it was destroyed. Everything is gone. My car is damaged. I only have the clothes I'm wearing."

Despite watching the wall-to-wall news coverage of their plight, few of the victims of the attack are angry. Instead, there's shell-shocked incomprehension.

One villager summed up the problem, saying, "The North Koreans are our brothers -- and our enemies." That's a contradiction most South Koreans have yet to square.