Accessibility links
Haitians Await ID Cards Ahead Of Vote Long lines formed outside government offices in Haiti on Thursday as people made last-minute efforts to collect voter ID cards, which they had applied for months ago and which they need to vote in Sunday's presidential elections. Meanwhile several of the leading candidates held rallies in the capital. 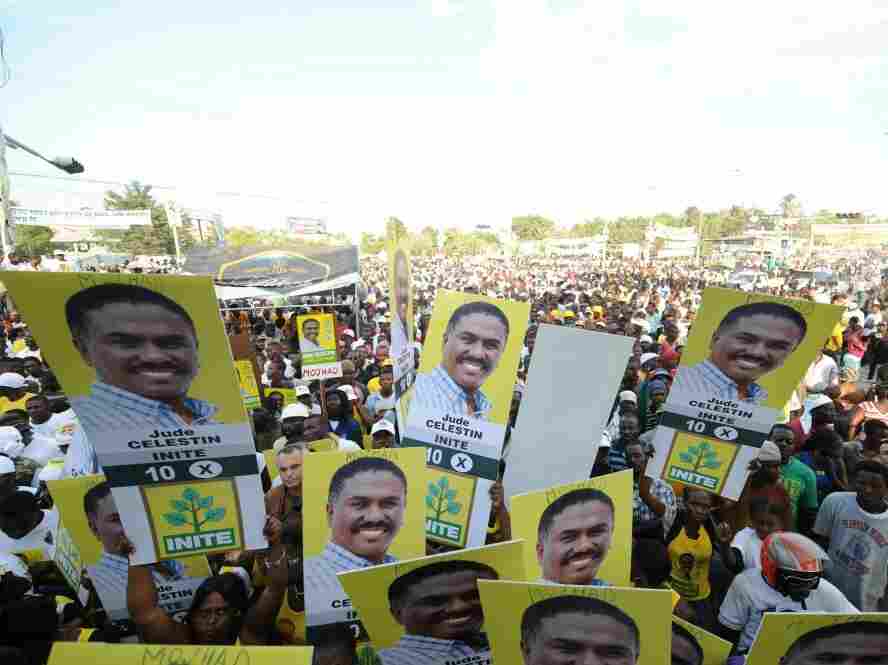 Long lines formed outside government offices in Haiti on Thursday as people made last-minute efforts to collect voter ID cards, which they had applied for months ago and which they need to vote in Sunday's presidential elections.

In the Delmas neighborhood of Port-au-Prince, dozens of people swarmed an office where they were trying to get their voting credentials. Several said they had been waiting in the scorching sun for hours. An official came out and told everyone in the line behind the building that they have to move to a line in front of the building. But the mob out front was already so big that it completely blocked the sidewalk. The people behind the office refused to move.

"I've been here since 5 o'clock with this receipt so they can give me the ID back, but they never do so," said Yolene Dorvilus, one of those in line.

She said that if she doesn't get the ID, she'll be back to wait Friday.

As the election approaches, similar scenes were playing out across Port-au-Prince. Many of the more than 1 million people left homeless after the January earthquake also lost their documents or had to reapply for an ID with a new address.

Meanwhile, just a few blocks down the street from this office, a rally for presidential candidate Jude Celestin was blocking one of the main arteries to the airport.

Young people in yellow T-shirts that say "Celestin" danced in the intersection.

Celestin, the chosen candidate of President Rene Preval, runs the Haitian national construction company. His posters are plastered across the capital.

One of his supporters, Germana Pascal, said he was supporting Haitian-American hip-hop star Wyclef Jean until Jean was disqualified. Pascal said he thought the most important issue in the election was education.

"If we have education, everything else will follow," he said. "Development, jobs and a country that is better for the youth."

On the other side of town, supporters of Michel Martelly, known as "Sweet Micky" -- a popular Compa musician known for his wild antics on stage -- were also massing in the streets.

In this crowd, 34-year-old Obede Derane said he was supporting the Haitian pop star precisely because Martelly has no experience in politics.

"We took a lot of candidates in the past who've had a lot of political experience," he said. "And nothing happened. They never made anything. We never saw any results.

"Now we are trying something different. We are trying Martelly because we know he has a vision."

While the supporters of various candidates are passionate about their particular man or woman, many Haitians say they expect little from this election.

In a crowded tent encampment just behind where Martelly's supporters were gathering, Micheline Jean, who was washing clothes in a large metal bowl, said she won't be going to any of the presidential rallies.

"I'm not interested in any of them because since all those presidents are coming, I never receive anything from them. No help at all," she said.  "I have to fight to survive for my life, for my kids, so I'm not interested to go anywhere."

Jean said that before the earthquake, her four children were in school but now none of them are. Asked whether she thinks the next president could help her move out of her tarp-covered tent back into a real house, she says, that's not up to the president, it's up to God.