Accessibility links
That Fat Lip Might Give Obama Some Street Cred Just three weeks after getting a shellacking in the midterm elections, President Obama got his lip busted in a basketball game. NPR's Scott Simon wonders if the injury could bring Obama just a little more respect. 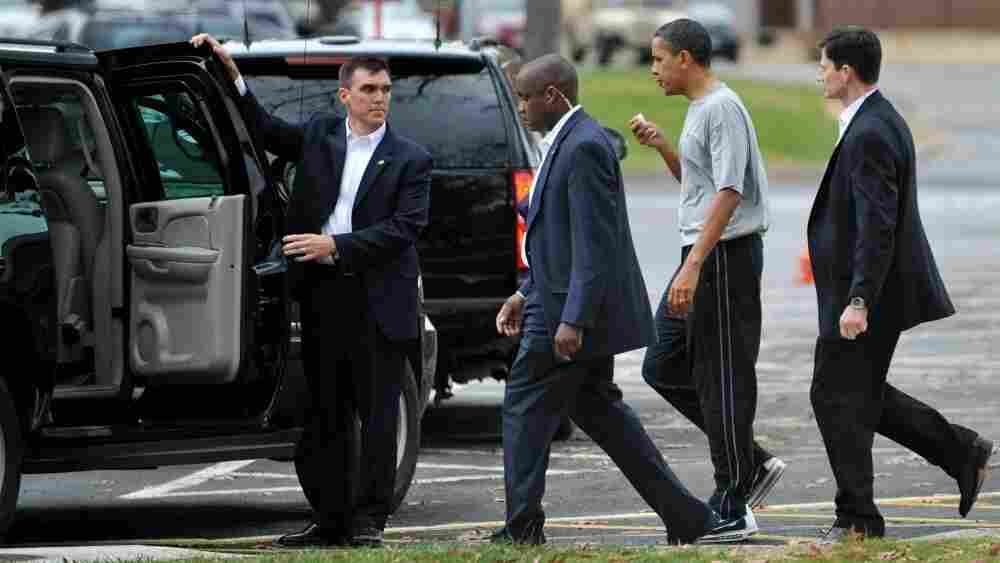 Just three weeks after getting a shellacking in the midterm elections, President Obama got a fat lip.

The president played basketball yesterday with some friends in the gym of the Fort McNair Army Base, and reportedly took an elbow in the mouth from an opposing player who went up for a shot.

It took 12 stitches to close The First Fat Lip, if you please. I'm not sure that Joe Frazier needed 12 stitches after the Thrilla in Manila, though the White House stressed that a smaller filament was used, which increases the number of stitches, but leaves a smaller scar.

I wonder if having a larger scar wouldn't actually fortify President Obama's profile, as he contends with Kim Jong Il, Mahmoud Ahmadinejad or Vladimir Putin. Imagine a president with a gnarly, vivid scar telling the rulers of China, "Nice country ya' got here. I'd hate to see something happen to it if you didn't stop foolin' around with the value of your currency. Know what I mean?"

As recent presidential injuries go, President Obama's is almost valiant. His immediate predecessor, President George W. Bush, famously choked on a pretzel. President Bill Clinton tore a tendon stumbling on the steps of Greg Norman's house after a round of golf.

But an elbow in the chops is a battle ribbon in basketball. Mediocre players don't have to worry about their dental work. An elbow is given to aggressive players who swing their own sharp limbs to grab a ball or push off a defender, although the White House stressed that the president was elbowed inadvertently.

For hours yesterday, the White House didn't reveal the identity of the president's on-court assailant. But in the absence of information, speculation abounded.

Among the hoopsters reportedly playing with President Obama were his nephew Avery Robinson, a high school basketball star in Providence, R.I.; Reggie Love, the president's personal assistant, who played for Duke University's national championship team in 2001; and Education Secretary Arne Duncan, who played four years of pro basketball in Australia.

Please note: John Boehner was nowhere nearby, although it is tempting to recall that when Sarah Palin played point guard for the Wasilla High team that won an Alaska state championship, her nickname was "Sarah Barracuda."

Last night, the White House finally released the name of the player whose elbow collided with the president's mouth: Reynaldo Decerega, who works for the Congressional Hispanic Institute.

The White House issued a statement from Mr. Decerega calling the president a good sport and tough competitor, and said he'll be back on the court soon.

Maybe after Mr. Decerega completes his White House tour of all the nuclear waste sites in Kazakhstan.