Accessibility links
'Daily Show' Star Whips Up A Food Movie -- And More Comedian and Daily Show correspondent Aasif Mandvi also has a thriving acting career. He talks with NPR's Audie Cornish about his new film, Today's Special, and staying true to his own identity.

'Daily Show' Star Whips Up A Food Movie — And More 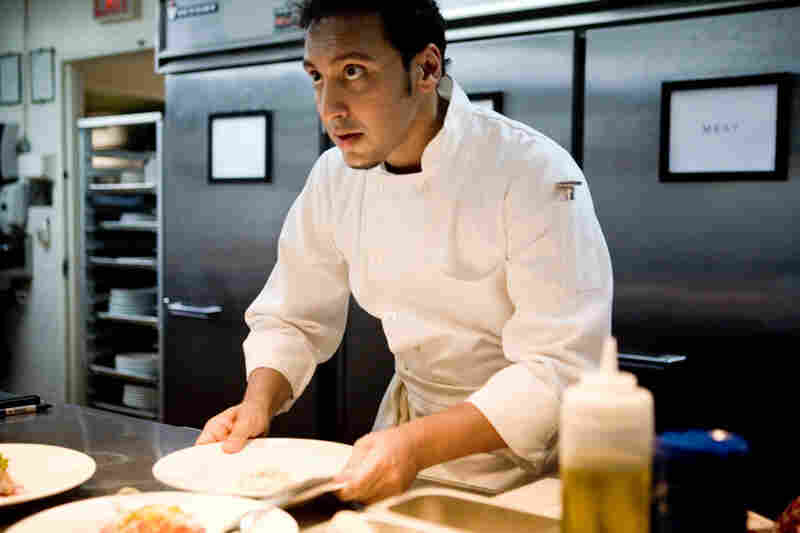 Aasif Mandvi plays Samir, a high-class chef who takes over his father's Indian restaurant after he has a heart attack. Matthew Cohen Creative hide caption

If you're a fan of The Daily Show, then you're probably familiar with the comic stylings of the show's regular "Middle East correspondent," Aasif Mandvi.

But what you may not know is that he's been acting on stage and in film for years, in everything from Analyze This and The Proposal to the Broadway revival of Oklahoma!

Mandvi co-wrote and stars in a new film, Today's Special, which was inspired by his Obie award-winning one-man show, Sakina's Restaurant.

In the film, he plays Samir, a high-class chef who takes over his father's rundown Indian restaurant after his dad has a heart attack. Samir soon finds himself fighting to keep the family business going.

But Samir's struggle is about more than just cooking and running a business, as Mandvi tells NPR's Audie Cornish.

"[Samir] wants to be a great chef, but he's never going to be the great chef that he wants to be until he actually reclaims his identity that he has let go," Mandvi says.

Food is a staple of most families and cultures, but may be especially true of immigrant communities.

"Immigrant communities always hold on to their food and their language," Mandvi says. "Those are the two things that they tend to hold on to in order to retain their immigrant identity."

As an actor, Mandvi has found himself fighting to stay true to his own identity, facing his share of typecasting in Hollywood.

"I started off my career playing one-dimensional cab drivers and deli owners and later it became one-dimensional terrorists and doctors," Mandvi says, "but if the role has complexity to it, then I think it's worth exploring."

If those same stereotypes limited his career early on, they may have helped him on The Daily Show. As the "Brown correspondent," he has been able to poke fun at many common misconceptions about Muslims and the Indian community.

Thanks to his work on that show, Mandvi ultimately believes that comedy can make a difference and allow you to "at least for a brief moment, understand something that is maybe quite complicated in a very simple form."