Accessibility links
Gambling Legend Wasn't Always A Winner His name was Alvin Thomas. But nobody dared call him that. "Titanic" Thompson earned his nickname from a life spent gambling -- because Titanic could sink anybody. 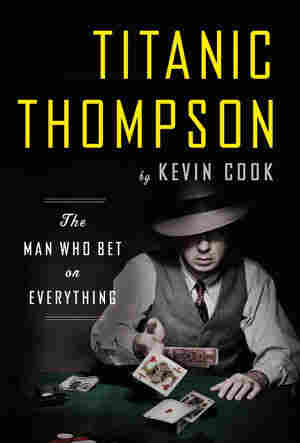 His name was Alvin Thomas. But nobody dared call him that.

During a life spent gambling -- and mostly winning -- he earned the nickname "Titanic Thompson" -- because Titanic could sink anybody.

Titanic Thompson became one of the most famous gamblers of the 20th century. Poker, golf, billiards, target shooting -- you name it, Thompson bet on it. And with a little creative cheating, he usually won.

The tall tales of Thompson's life are now collected in a new biography by Kevin Cook called Titanic Thompson: The Man Who Bet on Everything.

According to the book, Thompson "had close-set eyes that looked a little dead. At least, until he offered you a bet.  Then those dark eyes sparked, and he smiled like he had good news. 'Are you a gambling man?' he'd ask. 'Because I am.' "

Thompson even once scammed Al Capone out of $500, Cook tells NPR's Audie Cornish. The pair were leaving a poker game, and they passed by a fruit vendor. "I can throw this lemon all the way on top of that building across the street," Titanic boasted. Capone took the bet.

What the infamous gangster didn't know was that Thompson had prepared the bet the night before -- by filling a lemon with buckshot to make it easier to throw.

The gambler's reputation even inspired hard-boiled crime writer Damon Runyon to write Thompson into the story that became the musical Guys and Dolls -- as the character Sky Masterson.

Not bad for "a boy who came out of the Ozarks with nothing." Cook says Thompson was self-taught, living by wit and guile. "He was proud of that," Cook says. "He wanted to prove he was deserving."

Though he made millions over his lifetime, Thompson died almost penniless in 1974. Despite the glamorous tales, he lived a lonely life, moving from town to town looking for new suckers. Through five marriages and a scattering of offspring, Thompson really never connected with any person -- only with the games.

Excerpt: Titanic Thompson: The Man Who Bet on Everything

He blew into town like a rogue wind that lifted girls' skirts and turned gamblers' pockets inside-out. Tall and thin with a bland mask of a face, he had close-set eyes that looked a little dead, at least until he offered you a bet. Then those dark eyes sparked and he smiled like he had good news.

Titanic Thompson—a made-up name for a self-made man who won and lost millions of dollars playing cards, dice, pool, golf, horseshoes, and anything else he could think of to bet on. He also killed five men. "But they'd all tell you they had it coming." He also married five women, each one a teenager on her wedding day. Titanic liked his women young and pretty, his cars big and fast, his suckers rich and gullible. He spent fifty years roaming America's back roads, living by his wits and reflexes, until America changed and there was no more room for such a man.

In the years between world wars, Titanic Thompson motored from town to town in a nickel-plated, two-ton Pierce-Arrow, the same car Babe Ruth, Franklin Roosevelt, and the shah of Persia favored. He carried his tools in the trunk: left- and right-handed golf clubs, a bowling ball, horseshoes, a shotgun, and a suitcase full of cash. During his first twenty years on the road he crossed paths with Harry Houdini, Al Capone, Howard Hughes, Minnesota Fats, and Jean Harlow. Still he managed to remain a cipher to the public. Damon Runyon wanted to write about him, but Titanic told him to forget it. He said, "Mine ain't the kind of work publicity helps." So Runyon based a character on him—Sky Masterson, the hero of Guys and Dolls.

Professional gamblers still talk about Titanic Thompson. They say that he threw a watermelon over a three-story building, that he pulled Capone's pants down, that he beat Ben Hogan playing golf right-handed and then turned around and beat Byron Nelson left-handed, that he survived the sinking of the Titanic by sneaking into a lifeboat dressed as a woman. Only the watermelon story is true. But plenty of other Titanic tales are gospel. He hunted quail by throwing rocks, knocking the birds out of the air. He tricked Capone out of five hundred dollars and double-crossed Arnold Rothstein, the crime boss who fixed the 1919 "Black Sox" World Series. He hustled country-club golfers for twenty thousand a hole while Hogan and Nelson were earning ten thousand a year. He once drove a golf ball more than five hundred yards.

There's a true story to his name too. In 1912, a few weeks after the unsinkable Titanic sank, taking 1,517 souls down with her, a rangy teenager in a brown suit stepped into Snow Clark's pool hall in Joplin, Missouri. He proceeded to beat every player in the place, then asked, "Who's the best cue in town?" That would be Snow, the pool players said. Snow Clark could run the table as fast as you could blink.

Alvin from Arkansas moseyed over and introduced himself. In an Ozarks twang that sounded half-dim, he challenged the pool-hall owner to a game for five hundred dollars. That was enough to get Clark's attention. In 1912, a fellow could live for a year on that much money, or live like a prince for a couple of months, feasting on one-dollar steak dinners, with pie and ice cream on the side. Young Alvin did the latter after he ran the table on Snow Clark.

On his way out he noticed a sign Clark had posted in the window: $200 to Any Man Who Jumps over My New Pool Table. The table was nine feet long and four and a half feet wide. To clear it, a jumper would have to hurdle a fifty-four-inch surface that was thirty inches off the floor—an Olympic-caliber jump—before crashing down on the far side. "I can do it," Alvin said. "I can outjump a herd of bullfrogs." Clark and the others laughed. Even if the kid somehow cleared the table, he'd break his leg or arm or skull on the landing.

Alvin walked out, leaving them wondering if they had offended the boy by laughing at him. He returned ten minutes later dragging a mattress he'd bought at a fleabag hotel. He positioned the mattress beside the pool table, walked around to the other side, took a running start, and sprang into the air. According to an eyewitness, "He leaped headfirst across the table, did a flip and landed on his back on that mattress."

As Alvin collected his winnings, someone asked Snow Clark the stranger's name. "I don't rightly know, but it ought to be ‘Titanic,' " Clark said. "He sinks everybody."

After his christening in that smoky poolroom, the young hustler hit the road. Ahead lay more adventures, bigger money, romance, and violence, and on that road he would invent a vocation. Titanic Thompson would be America's original proposition gambler, always on the move, one step ahead of his victims and the law.