Accessibility links
'Undertow:' The Pull Of A Lover, Even After Death Peru's nominee for the foreign-language Oscar starts with a tragedy, ventures into magical realism and ends up diving deep into the emotional undercurrents of grief. (Recommended) 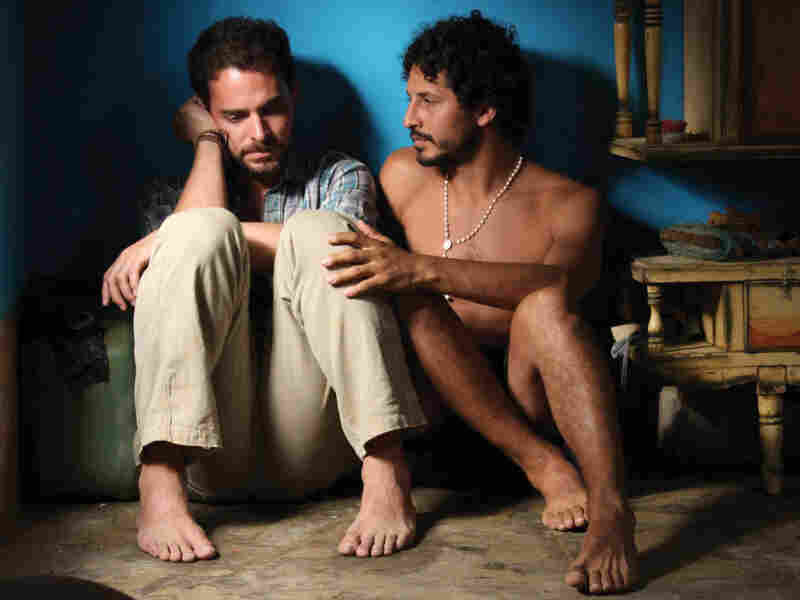 Not rated; in Spanish with English subtitles.

Awards season has arrived in Hollywood, bringing pictures large and small with Oscar hopes. Peru's nominee for best foreign-language film, Undertow (Contracorriente), is one of the small ones, but it has a big heart.

The story centers on Miguel, who lives with his very pregnant wife in a tiny fishing village on the coast of Peru. Village life is simple and unhurried. When a fisherman dies, the whole town is at the funeral, hearing Miguel promise to "take care of the body, so God may take care of the spirit and ensure it doesn't wander without rest."

On the fringes of the funeral is a photographer -- Santiago, a quiet, handsome outsider. To watch Miguel, you'd have no idea the two men knew each other. But after burying the fisherman at sea, before going home to his wife, Miguel veers off to meet Santiago in an abandoned building outside town, and they kiss.

Miguel does not seem troubled by their affair. He talks excitedly about his wife and the baby they're expecting. But Santiago chafes at having to hide his true feelings -- feelings so strong that when he accidentally drowns, his spirit spirits the film into magical-realism territory by hanging around, visible and audible only to Miguel, a real and substantial presence in his life.

Unlike the fisherman who was buried at sea, Santiago's spirit must wander without rest, at least until his body is found and offered to God. And Miguel, who couldn't choose between his lover and his family before, still can't. The difference now is that his lover is everywhere Miguel looks, present in ways he wasn't before. If you think about it, that's a pretty fair representation of how grief works.

First-time filmmaker Javier Fuentes-Leon both wrote and directed Undertow, and against considerable odds, he's made its unlikely ghost story complicatedly real. The mix of selfishness and compassion Miguel brings to his relationships, the feelings he and his wife must struggle with, the reaction of the town -- all are persuasive and wrenching and human. Undertow, for all its narrative tricks, has been given the rhythm and texture of real life, as well as emotional undercurrents that are haunting. (Recommended)