Accessibility links
Little White Lies Of Online Dating Revealed When looking for love online, dating sites know you're not telling the whole truth. Christian Rudder, co-founder of the dating site OkCupid, writes a blog for the site analyzing user data. He says people exaggerate their height and income, and also aren't as open-minded as they claim to be. 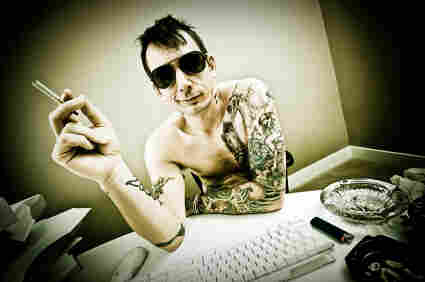 When looking for love online, people think they're 2 inches taller. That's not all they lie about, says the founder of one online dating service.

Unlike most online dating sites, OkCupid matches its more than 3.5 million users based on their answers to various quizzes. The data help make matches, but site co-founder Christian Rudder tells NPR's Audie Cornish the information also reveals some truths we might prefer others didn't know.

Like plumping up a salary. "People statistically add about $20,000 to their yearly income when they're kind of putting it out there," Rudder says.

Rudder analyzes the data from the site, looking for ways to improve the matchmaking process. The trends that emerged inspired him to share some of the more entertaining results.

"We thought that maybe the public would want to see some of the stuff, too," Rudder says. "We would take more interesting findings and polish them up for people to read."

Thus was born OkTrends, a blog that analyzes user data culled from the dating site.

The results don't always paint the site's users in the best light. Take one recent blog post titled "The REAL Stuff White People Like," in which Rudder and his team tried to identify top interests by race and gender.

Initially, the results were disappointing. "Almost everybody loves Italian food," he says.

But after tweaking the algorithm, they started seeing something intriguing: People's interests tended to fit gender and racial stereotypes.

"That post, in particular, I think, was there just as entertainment," Rudder says. "Of course, it was a little bit expected that it would be so stereotypical."

So what was accomplished? Rudder admits he's not sure. "But I think people enjoyed reading that stuff."

Not So Lovable Qualities

Other OkTrends posts have revealed more somber realities about general attitudes in the OkCupid community and the online dating world in general.

How Your Race Affects The Messages You Get

One such entry was "How Your Race Affects The Messages You Get."

"We found some kind of depressing things," Rudder says. "Foremost, that black people get the worst response rate across the board -- not just from white people, but from everyone. Yet black people give the most responses per message sent to them. It's a weird imbalance."

Rudder says he was particularly surprised by these results. Although many users claim to be open to dating people of other races, it rarely happens on OKCupid.

It's amazing how picky people actually are, Rudder says, and how often they misrepresent themselves.

"But also I'm amazed that so many people are, like, bold enough to put themselves out there and meet basically total strangers online and then eventually in person," he says.