Accessibility links
Staggering Cache Of Picassos Turns Up In France A retired French electrician and his wife say they stashed hundreds of never-before-seen works estimated to be worth at least $80 million in their garage. The works are believed to be authentic, but it's not quite clear how they came to be in the couple's possession. 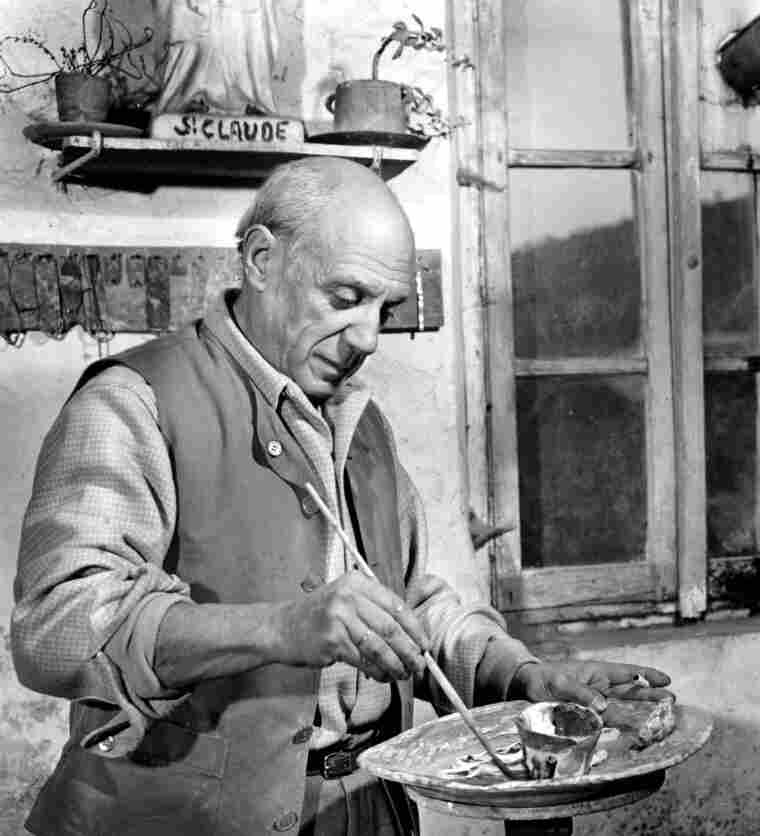 Spanish artist Pablo Picasso, 66, paints a plate in a pottery workshop at Vallauris on the French Riviera in January 1948. AP hide caption

A retired electrician in southern France who once worked for painter Pablo Picasso says he has hundreds of previously unknown works by the artist -- a treasure trove of 271 pieces said to be worth about $80 million.

Pierre Le Guennec and his wife for years squirreled away the staggering cache -- which is believed to be authentic, but whose origin is unclear -- in their garage on the French Riviera, said Picasso Administration lawyer Jean-Jacques Neuer.

The works, dating from 1900 to 1932, include lithographs, portraits, watercolors and sketches -- plus nine Cubist collages said to be worth euro40 million alone, according to French daily Liberation, which reported the discovery Monday.

Le Guennec, 71, says Picasso gave him the works as gifts. The electrician installed burglar alarm systems at Picasso's numerous houses in France during the three years before the artist died in 1973.

Claude Picasso was astounded. He couldn't believe his eyes.

Two months ago, Le Guennec attempted to get the canvasses authenticated by Picasso's son. But Claude Picasso dismissed Le Guennec's explanation of how the works came into his possession. The younger Picasso said his father would never have given so many pieces to a single person.

Shortly after that meeting, Neuer filed suit on behalf of Picasso's heirs for alleged illegal receipt of the works, and police investigators are looking into how Le Guennec and his wife came by the pictures.

Claude Picasso, quoted in Liberation, noted that his father was known for his generosity -- but that he always dedicated, dated and signed his gifts, as he knew that some recipients might try to sell the works one day.

"To give away such a large quantity, that's unheard of. It doesn't hold water," Claude Picasso was quoted as saying in Liberation. "This was part of his life."

To some, the emergence of the works by the 20th century's most renowned artist is akin to opening a time capsule, or a discovery on par with the recent publication of Mark Twain's 100-year-dormant autobiography.

"Claude Picasso was astounded. He couldn't believe his eyes," Neuer said. "Just about everybody has felt that way ... when you have 271 Picasso works that were never seen, never inventoried, that's just unprecedented."

New York's Metropolitan Museum of Art says Picasso produced more than 20,000 works of art during his long career. Hundreds have been listed as missing -- a number so large in part because he was so prolific.