Accessibility links
Potential 'Don't Ask' Repeal Raises Practical Questions Some of the questions the Pentagon will have to answer if the law barring openly gay troops is repealed: Will legal gay marriages be recognized in the military? If not, will gay partners get the same benefits as straight married couples? And do housing arrangements need to be changed? 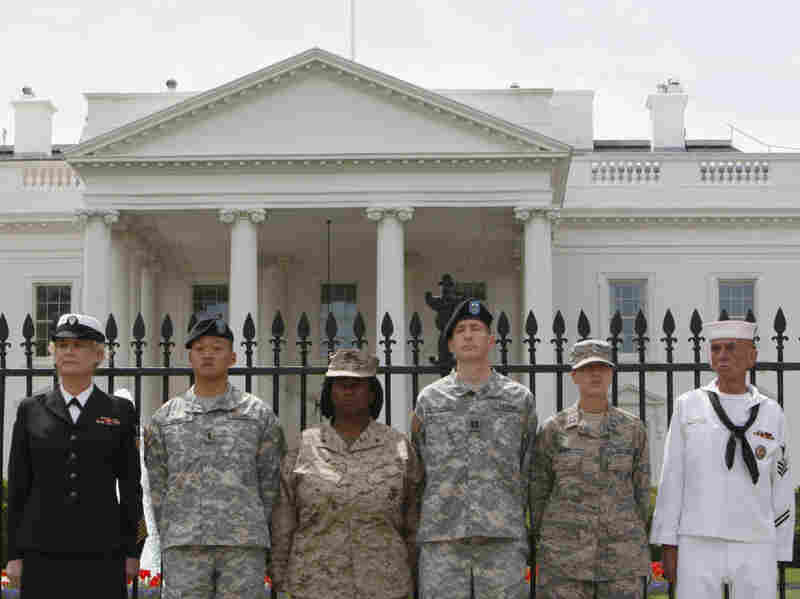 The Pentagon is getting ready to release a report Tuesday that could determine the future of "don't ask, don't tell," the 17-year-old policy that bans gays from serving openly in the military. For most of the past year, a special task force has been looking at how repealing the ban would affect the force -- and what kinds of institutional changes might have to be made.

"The issue immediately arises: What are the rights of gay partners?" says Anthony Cordesman with the Center for Strategic and International Studies. "Do they have insurance benefits? Do they have medical care? Do they have the legal equivalent of marriage?"

These are questions that in the civilian world the U.S. government has left up to the states. If don't ask, don't tell is repealed, the Pentagon may have to come up with its own answers. Will legal gay marriages be recognized in the military and, if not, will gay partners get the same benefits as straight married couples? What about their children? Will they get they get the same free education benefits as other military kids if a parent is deployed abroad?

As for overseas bases, Cordesman says that brings up a whole different set of questions.

"For example, there are countries where it would be very difficult to take a gay partner," he says. "The law simply prohibits that or creates almost draconian penalties."

He says that could force the Pentagon to renegotiate the agreements it has with foreign countries where U.S. troops are based.

There's also housing. Secretary of Defense Robert Gates asked the Pentagon task force to look at facilities and whether housing assignments would need to be rethought. And, finally, there's fairness. Cordesman wonders about whether openly gay troops will be treated as an official minority group. Will sexual orientation, like gender and race, be considered in efforts to improve diversity within the force?

Gay-rights groups aren't ignoring all these questions -- but they're definitely not playing them up.

Clarke says there are big issues that will have to be addressed, but he insists that, in the short term, repealing don't ask, don't tell will mean nothing more than an extra bullet point in a training presentation.

"Every year, every service member gets this series of briefs, so probably what will happen is ... there will be an additional bullet that will say, you know, in addition to harassing somebody based on their race or sex, you can't harass someone based on their orientation, either. So, nothing big."

Congress has been divided on what to do about don't ask, don't tell. A handful of Democrats and Republicans, including Susan Collins of Maine, have said they want to see the Pentagon's report before voting on repeal. Collins says while there will be a lot of bureaucratic issues to work through, the military has adapted to major change before.

"I suspect that a lot of the same arguments were made when President Truman decided to integrate the armed forces," she says. "I'm sure that there were the same cultural questions asked, and it was something that needed to be done, and once the policy was changed, the armed forces reacted very well. And I think that's what will happen in this case."

Senate Democrats are hoping to bring the issue to a vote before the end of the year, when Republicans take control of the House and increase their numbers in the Senate.

If the ban is repealed by then, Cooper of the Log Cabin Republicans says the most immediate change will be that, for the first time, gay service members can bring dates to the annual Christmas party.