Accessibility links
Clinton: WikiLeaks 'Tear At Fabric' Of Government Secretary of State Hillary Clinton calls the release of more than 250,000 confidential diplomatic documents "an attack on the international community," as the Obama administration orders all government agencies to review procedures for handling classified information. 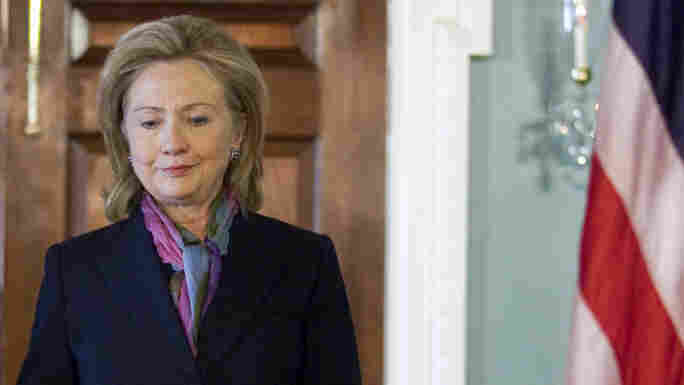 Secretary of State Hillary Clinton blasted the release of more than 250,000 confidential documents by WikiLeaks. She said Monday that such leaks pose "real risks to real people ... and often to the very people who have dedicated their own lives to protecting others." Evan Vucci/AP hide caption

Secretary of State Hillary Clinton blasted the release of hundreds of thousands of confidential diplomatic cables by online whistle-blower WikiLeaks and vowed to ensure that such a breach never happens again.

"Let's be clear. This disclosure is not just an attack on America -- it's an attack on the international community," Clinton said Monday at a State Department news conference. Such leaks, she said, "tear at the fabric" of responsible government.

"There is nothing laudable about endangering innocent people, and there is nothing brave about sabotaging the peaceful relations between nations," she added. 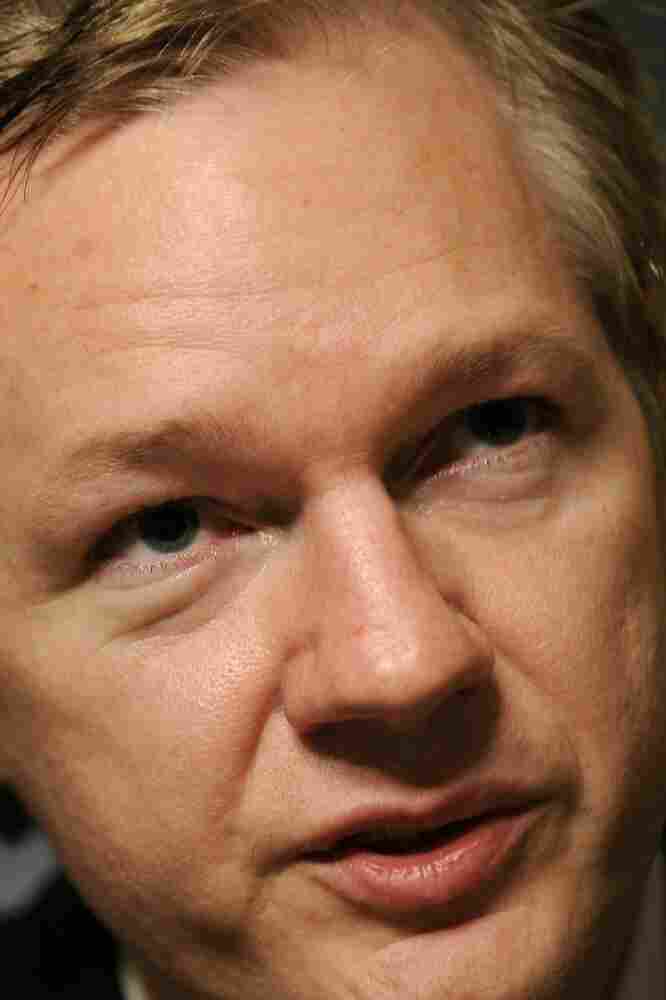 Clinton emphasized that she wanted to "make it clear to the American people and to our friends and partners that we are taking aggressive steps" to hold those who leaked the documents to account.

An early test came Monday when she met Turkish Foreign Minister Ahmed Davutoglu, described in one leaked cable as having neo-Ottoman ambitions. The two officials talked in private about this but avoided questions in public.

The secretary of state's remarks came hours after the Obama administration ordered a review of procedures to keep classified information from being released. U.S. Attorney General Eric Holder also announced that the Justice Department has an active criminal investigation into the documents' disclosure.

The Office of Management and Budget sent a memo on Monday telling government agencies to establish security assessment teams to make sure people have access only to the classified information they need to do their jobs.

The crackdown is part of a broader U.S. effort to convince foreign allies that the American government can be trusted to keep secrets. Jacob Lew, who directs the Office of Management and Budget, said the WikiLeaks release caused "significant damage" to national security.

Holder said the Justice Department will prosecute if violations of U.S. law are uncovered in the criminal probe into the leaked documents. Speaking at a news conference Monday, he condemned the disclosures as having put at risk the safety of diplomats and other American government personnel.

'Can The United States Be Trusted?'

WikiLeaks posted the more than 250,000 documents online and provided them to The New York Times, France's Le Monde, Britain's Guardian newspaper, the German magazine Der Spiegel and others for release Sunday.

The documents offer an unprecedented look at the American diplomatic process. They include diplomatic cables, encrypted e-mails and memos sent between the State Department and U.S. embassies abroad spanning an entire generation of American diplomacy — from 1966 to cables written as recently as this past February.

Rep. Peter Hoekstra of Michigan, the senior Republican on the House Intelligence Committee, called the release very damaging to U.S. interests. "The catastrophic issue here is just a breakdown in trust," he said Monday, adding that many other countries — allies and foes alike — are likely to ask, " 'Can the United States be trusted? Can the United States keep a secret?' "

Times reporter David Sanger, who was given an advance look at documents pertaining to Iran, told NPR that "two or three things stood out."

"Arab countries from around the Persian Gulf were as concerned, if not more concerned, about the prospect of a nuclear Iran than, say, Israel is," Sanger said. "In their private conversations with the United States, some [Arab leaders] were going right up to the edge of urging military action, which seemed to be far beyond anything they were saying in public."

He said some of the documents show that the American intelligence community "believes that Iran obtained 19 medium- to long-range missiles from North Korea that would allow them to ultimately reach, say, Berlin on the European side, Moscow in the other direction."

Sanger added that the leaks also reveal that intelligence officials don't believe Iran yet has a nuclear weapon.

Sensitive documents in the release detailed how Saudi Arabia's King Abdullah repeatedly urged the U.S. to launch a strike on Iran to destroy its nuclear program and stop Tehran from developing a nuclear weapon

Israeli Prime Minister Benjamin Netanyahu said the leak of such views vindicates his country's position on Iran. If "leaders will say in public what they say in private, there might be a breakthrough," Netanyahu said Monday.

Iranian President Mahmoud Ahmadinejad dismissed the leaks as part of an "organized effort by the U.S. to stir up trouble between Tehran and its Arab neighbors."

"We don't give any value to these documents," Ahmadinejad said at a news conference Monday. "It's without legal value. Iran and regional states are friends — such acts of mischief have no impact on relations between nations."

3. Mohammed Ali Jafari, the chief of staff of Iran's Revolutionary Guard, allegedly slapped President Mahmoud Ahmadinejad in the face after getting into a heated argument when the president advocated freedom of the press.

4. The U.S. ambassador to Tripoli said Libyan leader Moammar Gadhafi uses Botox and that he is a hypochondriac who films all medical examinations for later analysis with doctors.

5. In 2009, U.S. diplomats in Rome wrote that Italian Prime Minister Silvio Berlusconi "appears increasingly to be the mouthpiece of" Russian Prime Minister Putin. They said their Italian contacts described the relationship between both men as extraordinarily close, which included "lavish gifts."

6. Diplomatic observers commented on Gadhafi's constant companion during a trip to Manhattan last year. They describe the "senior Ukrainian nurse" as a "voluptuous blonde."

The cables portrayed British Prime Minister David Cameron as a political lightweight, and a former government minister whose name was withheld was described as a hound dog who chased women.

"Some of the information will severely damage operations against terrorism, the strategy of Western and democratic governments to deal with countries like Iran or North Korea, who are trying to develop nuclear weapons and it is very, very disgraceful," he said.

David Field, a spokesman for Cameron, said "it's important that governments are able to operate on the basis of confidentiality of information."

The cables described president French Nicolas Sarkozy as an emperor with no clothes, thin-skinned and authoritarian.

French Budget Minister Francois Baroin said the government would not comment and pledged France would help the U.S. defend diplomatic secrecy. "We are naturally very worried about the release of information of a confidential nature," he said. "The protection of nations, it's something very important. ... Personally, I've always thought that a transparent society would be a totalitarian society."

Italian Foreign Minister Franco Frattini dramatized the leak as the "Sept. 11 of world diplomacy." But Italian media reported that Prime Minister Silvio Berlusconi "laughed off" an assessment of himself as "feckless" and "vain" and comments that "frequent late nights and a penchant for partying hard means he never gets sufficient rest." It also outlined his close ties to Libya's Moammar Gadhafi and Russia's Vladimir Putin.

Christopher Hill, the former U.S. ambassador to Iraq, told All Things Considered co-host Guy Raz the leaks were damaging, especially to the individual embassies. He said Clinton was very likely having a full-time job "talking to some of these leaders explaining that these are comments taken out of context."

"I think we'll get through some of these bilateral relationships, but I do worry about the business of diplomacy," Hill said. "I worry about what people are afraid to put in cables in the future. ... I think there needs to be a lot of tightening up and I suspect that that process has begun."

Server With Classified Data Has Many Users

It's believed the leaked diplomatic cables released by the online whistle-blower WikiLeaks came from something called the Secret Internet Protocol Router Network, or SIPRNet, the secure "private internet" used by the military and the State Department.

But the network's security is only as good as the people using it.

Kiki Munshi, a retired Foreign Service officer who served in Iraq, recalls having two computers: one that she used for everyday conversations and one that was a military computer that could be used for classified information.

That second computer would have been connected to SIPRNet. It was meant for secret communications.

"What the government did is they made their own network to look just like the Internet, except it's for classified information, and then only people who were cleared had access to it," said Bruce Schneier, a prominent author and consultant on computer security.

The network was expanded intentionally after the Sept. 11, 2001, attacks, because of the belief that more information-sharing among agencies might lead to the detection of terrorist plots.

But SIPRNet has expanded so much that now an estimated 2 million or more military and civilian personnel have access to the system. With that many users, no amount of special logins and tracking software can guarantee security, Schneier said.

And that's apparently what happened: Although the source for the WikiLeaks information isn't known, the assumption is that this information was leaked, not hacked. It may not have been the first time. Earlier this year, the Army charged an intelligence analyst named Bradley Manning with being a source for WikiLeaks.

Other potentially damaging revelations include descriptions of how Washington used tough tactics to get other countries to accept freed detainees from Guantanamo Bay. In the case of Slovenia, its president was told to accept a detainee in exchange for a meeting with President Obama. The Pacific island nation of Kiribati was offered millions of dollars in aid if it took a group of released Guantanamo inmates, according to The Times.

Diplomatic messages also describe unsuccessful U.S. efforts in 2007 to persuade Pakistani officials to remove highly enriched uranium from a reactor out of fear that it could be used to make a nuclear weapon. Other exchanges detailed Yemen's president, Ali Abdullah Saleh, telling U.S. Gen. David Petraeus that his country would pretend that it was responsible for American missile strikes against a local al-Qaida group.

Documents also indicated that the U.S. and South Korea were "gaming out an eventual collapse of North Korea" and discussing the prospects for a unified country if the isolated, communist North's economic troubles and political transition lead it to implode.

A message from the U.S. Embassy in Beijing reportedly included allegations from a Chinese contact that China's Politburo directed a cyber-intrusion into Google's computer systems as part of a "coordinated campaign of computer sabotage carried out by government operatives, private security experts and Internet outlaws."

The Guardian quoted one communique as saying Karzai was a man who "did not listen to facts but instead was easily swayed by anyone who came to report even the most bizarre stories or plots against him."

Russia's Putin is presented as the country's "alpha dog" ruler and President Dmitri Medvedev as one who has to have all important decisions approved by Putin.

Le Monde said a recent memo asked U.S. diplomats to collect basic contact information about U.N. officials that included Internet passwords, credit card numbers and frequent-flier numbers. They were asked to obtain fingerprints, ID photos, DNA and iris scans of people of interest to the United States, according to the newspaper.

The documents calls Libya's Gadhafi "erratic" and in the constant company of his "voluptuous blonde" Ukrainian nurse.

"Some foreign leaders may be embarrassed and upset that the United States didn't do a better job of protecting their privacy," Keller said. "But the reason they do business with us and forge relationships of mutual interest is out of self-interest."

With reporting from NPR's Michelle Kelemen, Dina Temple-Raston, Ari Shapiro, Sylvia Poggioli in Rome and Lourdes Garcia-Navarro in Jerusalem. Material from The Associated Press also was used in this story.