Accessibility links
Quitters Never Win, Except On The New Wimp-Friendly 'Amazing Race' Somewhere along the line, The Amazing Race forgot that it's supposed to reward persistence, not quitting. That's where last night's episode went wildly wrong.

Quitters Never Win, Except On The New Wimp-Friendly 'Amazing Race'

Quitters Never Win, Except On The New Wimp-Friendly 'Amazing Race' 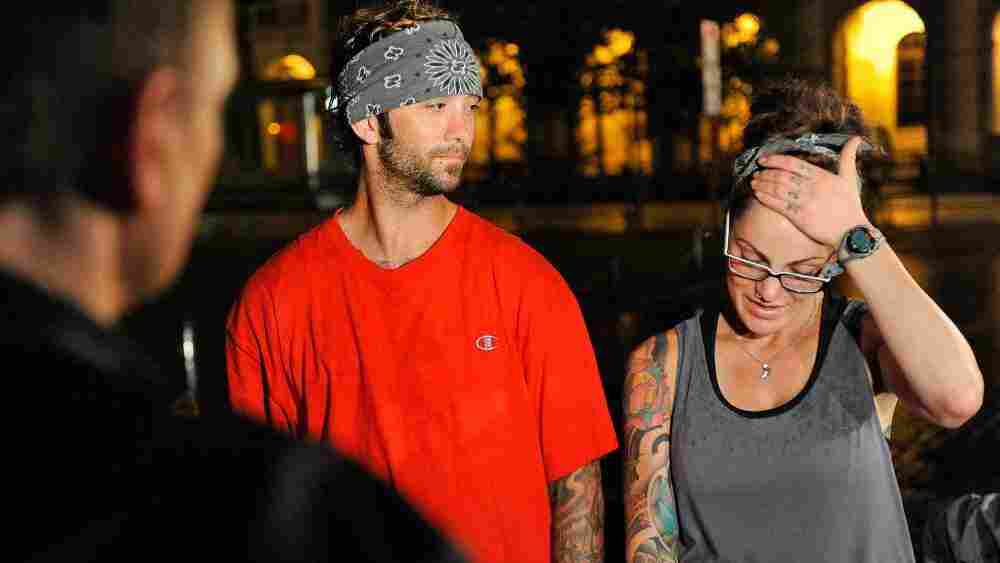 Nick and Vicki found themselves in an unenviable position last night on The Amazing Race -- but not as unenviable as it should have been. Jeffrey R. Staab/CBS hide caption

Pardon me while I put on my reality-television nerd hat for a moment.

There's a reason why The Amazing Race won a bunch of Emmys in a row. Well, actually, there are a bunch of reasons. It tends to be tightly edited with observant good humor, it features great location shooting around the world, and, at least in early seasons, it cast somewhat fewer people with massive personality disorders than other reality shows.

But most of all, what makes it compelling is that it's so relentless. Survivor may pride itself on being all about enduring the elements, but the "elements" part has faded in recent seasons as feasts and treats proliferate, and the endurance part carries an asterisk because of how obvious it is that, a significant amount of the time, the most challenging thing the contestants face is massive boredom.

On Race, though, mental exhaustion and the unending march of logistical hassles (airline flights, following directions, getting cabs, that sort of thing) -- as fans call the whole phenomenon, the challenges of "killer fatigue" -- constitute one of the biggest obstacles.

Teams that start off sharp and capable make more and more mental errors as they become more tired, more frustrated, and more sleep-deprived. In the first season, to a significant degree, teams dropped off in almost exactly the order in which they succumbed to this particular ailment. The show has a fondness for making sure to include exacting, concentration-heavy tasks late in the race (which lasts roughly a month -- a little less these days, it seems), and part of what makes it exciting is seeing teams struggle to keep their composure and patience against enormously difficult odds.

While there have been exceptions (which would require even more nerd-ery to explain), up until last night, quitting -- deciding not to do a task -- was usually the end of you, as it should be. The rule is generally that you take a giant, many-hours-long penalty for skipping the task, to the point where it knocks your team out. You can't let people skip tasks just because they're tired; it's not consistent with the spirit of the whole thing. Not being able to skip steps is what makes the challenge. (Side note to show obsessives only: Yes. Boston Rob. Meatblock. That was different. DO NOT E-MAIL ME.)

But then Nick and Vicki came along.

Now, what you should know about this couple is that (1) Vicki has asthma, and (2) Nick thinks she's a real loser for having all this asthma which sometimes keeps her from running very fast. He berates her regularly for stopping to breathe. (If you are thinking, "Wow, jerk," you are right.)

Last night, they faced a task where they had to go out in a sampan in Hong Kong and look -- in the dark, with flashlights -- for a boat with a particular registration number. It was tedious, tiring work, and Nick decided he didn't want to do it. (This despite the fact that he'd been sitting around with nothing to do but complain while Vicki tackled a previous task that called upon her to eat a bunch of sushi. It's a long story.) Vicki wanted to keep at it, but Nick got nastier and nastier until he just lay down in the bottom of the boat, put his bandana over his eyes, and went to sleep, telling her he wanted to quit. She carried on for a bit without him, but then admitted that she couldn't stay on the race without her partner if he wanted to quit, they gave up and went to the "pit stop," the endpoint for the episode, announcing that they were taking their penalty and throwing in the towel.

Their penalty turned out to be six hours. And it turned out that this was one of the handful of legs of the race that's "non-elimination," meaning that the team that comes in last isn't eliminated, but continues on, albeit starting from last place. (Generally, you leave for the next leg in the order, and with the time differences, you arrived at the end of the last leg.) And while they'll be at least six hours behind at the beginning of the next leg, it can easily happen that the need to book and wait for long flights eats up hours of difference, causing all the teams to catch up to each other. Obliterating a six-hour lead would be far from unheard of.

So it's entirely possible that quitting the task will have absolutely no effect whatsoever. It is entirely certain that all the other teams, had they known Nick and Vicki were going to quit, could have saved themselves the mental exhaustion of actually doing the task and taken the penalty themselves.

To put it simply, this is wimp stuff, and Race is not supposed to be a game for wimps. The penalty for task-skipping of the particular kind Nick and Vicki engaged in was once 24 hours. An entire day! That's a difference that flight times wouldn't eradicate. If it were 24 hours, it would polish them off, as it should. Six hours is totally different. Six hours is "well, the teams ahead of you have to wait for the airport to open, and then there's only one flight per day from Hong Kong to Melbourne," and before you know it, POOF. Everybody's tied.

Quitting has to mean doom. Quitting has to mean being gone. Quitting has to mean quitting. Capital Q, capital U ... you get the idea. Should Nick and Vicki win, they will rightly be the most despised victors of all time, because they quit. They shouldn't be there anymore. Teams have searched inside bales of hay for hours and hours, unwilling to quit. They've struggled with rain, with cliffside ascenders, with puzzles, with pounds of caviar ... good and bad challenges, they have figured out how to not quit.

Everybody who quits and rolls over pitifully has to have a worse outcome compared to what would have happened to them if they hadn't quit. Otherwise, you have no game, and you have no show. Letting some dip lie down in a boat and passive-aggressively hassle his girlfriend into quitting, only to let them both take a big fat nap and then return to fight again the next day? Forget it. That's not racing. That's a bad vacation.