Accessibility links
Alleged Portland Bomber To Claim Entrapment To be sure, the FBI did provide a van and the fake explosives that were supposed to terrorize the crowds that had gathered the day after Thanksgiving for the annual lighting of the tree in downtown Portland -- but providing the means to do something isn't enough for entrapment. 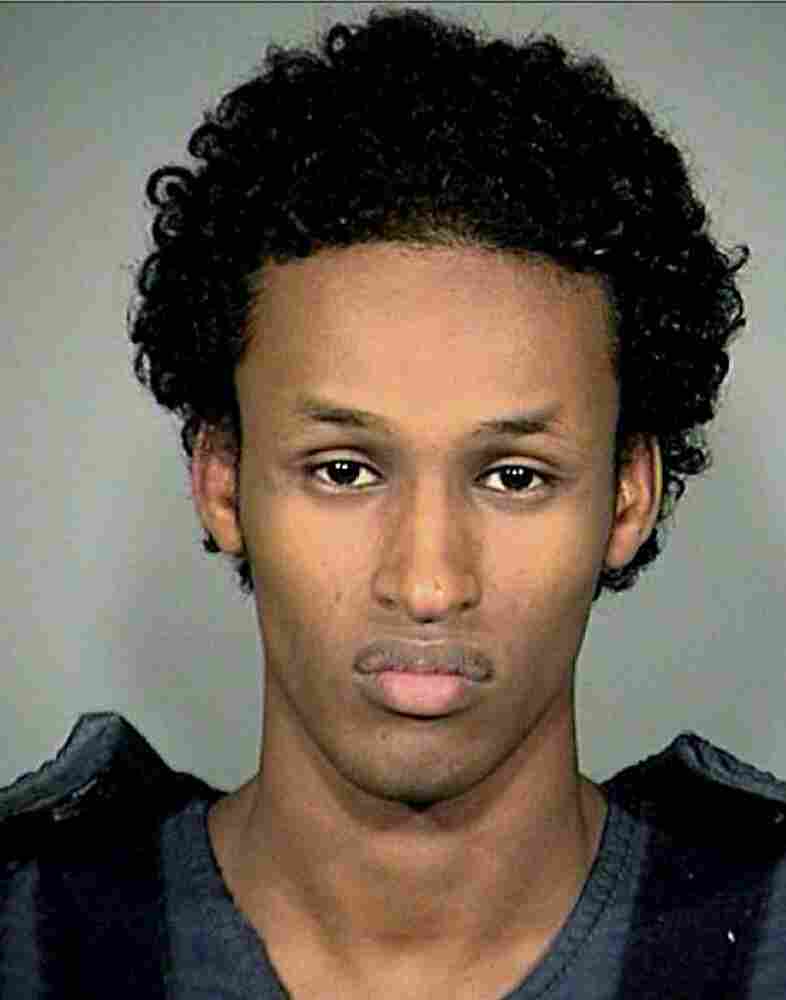 The teenager accused of plotting to bomb a Christmas tree-lighting ceremony in Portland, Ore., has pleaded not guilty to the terrorism charges leveled against him. Defense attorneys for Mohamed Osman Mohamud, 19, a Somali-born naturalized U.S. citizen, say their client was "groomed" by the FBI and could have been entrapped.

To be sure, the FBI did provide a van and the fake explosives that were supposed to terrorize the crowds that had gathered the day after Thanksgiving for the annual lighting of the tree in downtown Portland -- but providing the means to do something isn't enough for entrapment. Officials say they didn't direct the plot, Mohamud did. And in an affidavit, the FBI says that Mohamud not only chose the venue for the attack but shrugged off attempts to derail the plot when it was under way.

"There were a number of opportunities the defendant was given to retreat and to take a different path," Attorney General Eric Holder said Tuesday. "And he chose at every step to continue."

That said, critics ask: If the FBI did not provide a van and explosives to the young man, would he ever have tried to launch an attack on his own? Mohamud's defense is likely to argue he wouldn't have. Prosecutors will argue he was a potential threat who was looking to have someone help him launch an attack and had it not been the FBI, it might well have been someone else.

That's the question at the heart of an entrapment defense. Civil liberties advocates say these sting operations, particularly since the attacks of Sept. 11, 2001, have ended up focusing on people who pose no real danger but are susceptible to being lured into pretend plots by law enforcement officials. The FBI says it is preventing potential attacks from happening.

Stephen Sady, one of Mohamud's attorneys, says the government had been "basically grooming" his client and there was "potential for entrapment." The government failed to record Mohamud’s first meeting with the FBI undercover agents and, Sady said, "It's the first meeting that matters."

The Supreme Court says suspects need to be "independently predisposed" to commit the crime for which they are arrested. That's what entrapment gets down to -- someone having a choice and, essentially, making the wrong one.

This is an investigation I have been familiar with throughout its course and I am confident there is no entrapment here and no entrapment claim will prove to be successful.

In this case, according to an FBI affidavit, agents kept telling Mohamud that he didn't need to kill to be a good Muslim. But he allegedly wanted to move forward with the plot anyway.

"This is an investigation I have been familiar with throughout its course and I am confident there is no entrapment here and no entrapment claim will prove to be successful," Holder said.

Federal agents had been watching the young man for nearly six months. It is unclear whether Mohamud's father first tipped off FBI agents to his son's growing interest in radical Islam, or whether the teenager was first discovered in jihadi chat rooms. He allegedly was trolling for someone who might help him sign up for violent jihad.

Officials tell NPR that Mohamud does not have any connection to the more than two dozen missing Somali-Americans from Minneapolis who allegedly joined forces with a Somali militia called al-Shabab. In fact, one official said, agents were surprised that Mohamud did not even try to contact al-Shabab, but instead allegedly looked for an Islamist mentor in Pakistan.

The Portland case is reminiscent of several other sting operations the FBI has launched in recent months. In each, young American residents were inspired by Islamist websites and were eventually contacted by undercover FBI agents or informants who pretended to be terrorists and provided explosives and other materials needed for the plot.

In September 2009, Hosam Smadi, 19, was caught in a similar operation. He was a Jordanian citizen whom agents discovered in a jihadi chat room. He was arrested and charged after placing a bomb he thought was real in the basement of a Dallas skyscraper. A little more than a year later, Farooque Ahmed, a 34 year-old Pakistan-born naturalized American citizen, was arrested and charged with plotting to bomb the Washington Metro system.

The FBI has had trouble with sting operations in the past. In particular, the 2006 Liberty City case has become the sting operation's cautionary tale. In that case, seven men from Miami's impoverished Liberty City neighborhood said they wanted to blow up Chicago's Sears Tower. The attack never got past the boasting and bravado stage, but the men were arrested. After two mistrials and two acquittals, prosecutors eventually convicted five of the men. Ever since, the FBI has been sensitive to the risk of entrapment.

As for the entrapment defense, which Mohamud's lawyer is preparing, it hasn't been very successful in terrorism cases. According to the Center on Law and Security at New York University, which tracks terrorism cases, there hasn't been even one acquittal on the grounds of entrapment since the Sept. 11 attacks.