Accessibility links
In Malawi, A Greener Revolution Aligns Diet And Land Experts are looking for ways to help African farmers cultivate a more balanced diet without sacrificing crop yield. In Malawi, they found that farming legumes like peanuts and pigeon peas instead of corn may be a solution. 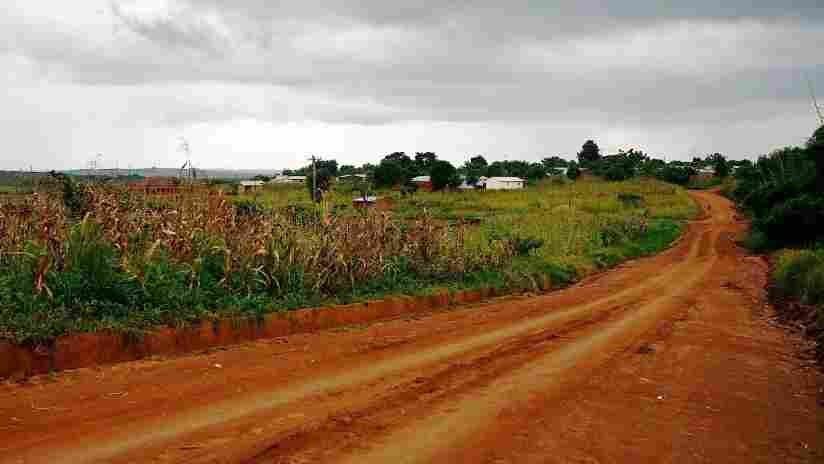 Cornfields in Malawi, like this one, can be used to grow legumes such as pigeon peas, which replenish the soil and are more nutritious than corn. Michelly Rall/Getty Images hide caption

When Sieglinde Snapp arrived in the small African country of Malawi in the early 1990s, she thought it looked surprisingly familiar. "It's a little bit like going to Iowa, in that you see corn everywhere, up the hillsides and down the hillsides," she says.

Corn, known here as maize, is the main source of food in Malawi and across much of eastern and southern Africa. According to Snapp, an agricultural researcher who currently is on the faculty at Michigan State University, Malawi has a saying: Maize is life.

Malawi has been celebrated in recent years as the scene of a modest Green Revolution. Corn harvests are up and hunger is down, thanks to a government program that passes out cut-rate sacks of seed and fertilizer to farmers.

But those subsidy programs are expensive. Corn is a demanding crop; it needs lots of fertilizer and water. And corn by itself is not an ideal diet -- it may provide the calories to keep you alive, but it lacks other essential nutrients.

"Even with gains in maize, it is just a starch. Children, to grow healthy, need a bit of oil and protein," says Snapp. About a third of the people in Malawi have experienced malnutrition severe enough to stunt their growth.

Many believe that farmers in Malawi and all over Africa need to look beyond corn.

More than a decade ago, Snapp started looking for ways that farmers could add alternative crops to their fields and their meals. She focused on a class of plants called legumes, which includes peas, beans and peanuts. Legumes don't deliver as much grain as corn, but they contain precious protein. What's more, they take nitrogen from the air and convert it into fertilizer, replenishing the soil for the next corn crop.

Living On A Dollar A Day In Malawi

For the past 10 years, Snapp and some colleagues in Malawi have been working with farmers all over the country who were willing to use some of their land to plant legumes. They tried many different types, including pigeon peas, peanuts and another legume that continues growing year after year, depositing lots of nitrogen fertilizer in the soil. The researchers wanted to know if those crops were practical for farmers to grow.

"We had to see which ones were profitable -- which ones took less labor.  Farm families in Africa are really labor-strapped," says Snapp.

Last week, the researchers published their results in a scientific journal, the Proceedings of the National Academy of Sciences.

Snapp says the experiment confirmed her hopes. When farmers planted legumes, it meant that they had less land available for corn in that year, but Snapp says the next year, farmers were able to harvest more corn from that land, because the legumes made the land more fertile. So over the long term, farmers grew just as much corn, plus they had a bonus crop of nutritious legumes. Pigeon peas proved most popular among farmers. Women, in particular, were happy to grow a more nutritious crop.

"Now it's starting to snowball," Snapp says. "Fifty-some villages, 8,000 farmers are now doing this, many with minimal connections to the project. In other words, we're not providing seeds anymore."

So: problem solved?  Maybe not, for most farmers, says David Rohrbach, an agricultural economist in the World Bank's office in Malawi.

African farmers already grow legumes or vegetables when they can, he says. But in places like Malawi, many have so little land that they're afraid to. Survival comes first.

"They're almost forced to put most of their land into their primary staple food, such as corn," he says.

Rohrbach places greater hope in a different approach: Find ways to grow more corn on each acre. If farmers are confident they can grow more than enough corn, he says, they'll be willing to spare some land for crops that provide a more healthful diet.