Accessibility links
Overeating, Like Drug Use, Rewards And Alters Brain An addict's motivation to take drugs and a hungry person's motivation to eat use similar circuits in the brain, research indicates. That doesn't mean food is addictive, but certain foods do act a lot like a drug in the brain and can alter the brain the way drugs do. 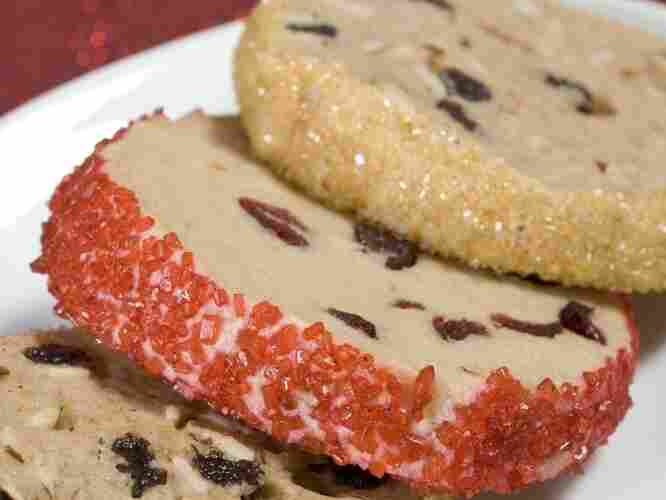 If you've ever wondered why it's hard to stay on a diet, consider this observation from Ralph DiLeone, a brain scientist at Yale University: "The motivation to take cocaine in the case of a drug addict is probably engaging similar circuits that the motivation to eat is in a hungry person."

That's what brain scientists have concluded after comparing studies of overeating with studies of drug addiction, DiLeone says.

They've also found that, at least in animals, sweet or fatty foods can act a lot like a drug in the brain, he says. And there's growing evidence that eating too much of these foods can cause long-term changes in the brain circuits that control eating behavior.

The food-drug link comes from the fact that both animal and human brains include special pathways that make us feel good when we eat, and really good when we eat sweet or fatty foods with lots of calories, DiLeone says.

"Drug addiction is really hijacking some of these pathways that evolved to promote food intake for survival reasons," he says

That doesn't necessarily mean food is addictive the way cocaine is, DiLeone says, but he says there is growing evidence that eating a lot of certain foods early in life can alter your brain the way drugs do.

Food That Changes The Brain

Teresa Reyes, a research assistant professor in the Department of Pharmacology at the University of Pennsylvania, showed that in an experiment with mice.

Drug addiction is really hijacking some of these pathways that evolved to promote food intake for survival reasons.

Reyes was part of a team that gave mice a high-fat diet from the time they were weaned until they reached 20 weeks, so they gained significant amounts of weight and became obese. Then the researchers looked at the brain's pleasure centers -- areas known to change in drug addiction.

"What we found is that in animals that were obese, there were really dramatic changes in these areas of the brain that participate in telling us how rewarding food is," Reyes says. The changes made these areas less responsive to fatty foods, so an obese mouse would have to eat more fat than a typical mouse to get the same amount of pleasure, she says.

And some of the changes didn't go away, even when the mice returned to a normal diet.

"So it is similar to what happens in cases of chronic drug abuse," Reyes says. "The reward circuitry changes in a similar way, and that promotes the seeking of that drug, or in our case, in seeking palatable food."

That could help explain why obese children tend to remain that way as adults, she says.

More evidence of a link between food and drugs comes from a team that has been trying to understand how hunger can trigger an animal's craving for drugs.

"Hungry animals will take a lot of drugs," says Uri Shalev, a researcher at Concordia University in Montreal. 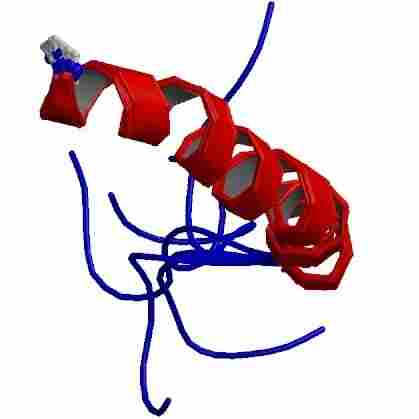 Neuropeptide Y, a brain chemical, makes animals feel hungry. Research at Concordia University in Montreal is using the chemical to study the link between food and drugs in the brain. Protein Data Bank hide caption

Shalev and his colleagues studied rats that had learned to give themselves heroin by pressing a lever. When the scientists removed the heroin, the rats mostly stopped pressing the lever. But when the scientists also took away the rat's food, the lever pressing came back with a vengeance.

The rats would press the lever hundreds of times, "even though they don't get the drug anymore," Shalev says.

Many other studies also have shown links between food and drugs.

A Swedish team found that a stomach hormone called ghrelin could make rats seek sugar the way addicts seek drugs. And a team at the University of California, Santa Barbara, found that male rats chose sugar over small amounts of cocaine, while female rats did just the opposite.

Even so, DiLeone, the Yale researcher, says it's still not clear how far the food-drug comparison holds up, especially in people.

That means it makes sense to focus on eating behavior early in life, when the brain is adapting to a particular environment. It also probably makes sense to take approaches used to treat addiction and adapt them to overeating," DiLeone says.

The new studies on overeating and addiction were presented at the 2010 Society for Neuroscience meeting in San Diego.