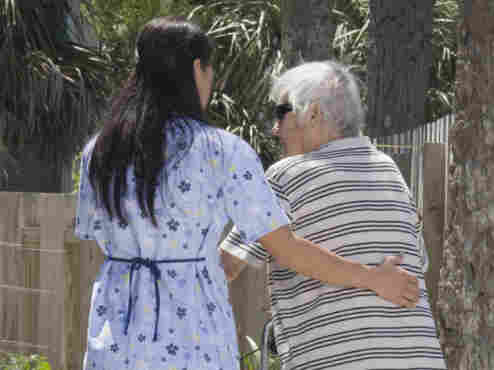 Experts say it's nearly impossible to address U.S. fiscal problems without coming to terms with Medicare. The program provides coverage to 47 million Americans, consumes 12 percent of the federal budget and accounts for $1 of every $5 spent on health care each year. Its future includes 78 million baby boomers. Kirby Hamilton/iStockphoto.com hide caption

What provides health care coverage to 47 million Americans, consumes 12 percent of the federal budget, and accounts for $1 of every $5 spent on health care in the U.S. each year?

If you answered Medicare, you win a piece of the nation's deficit problem -- a big piece.

"If you look past the next eight to 10 years, Medicare is the deficit problem," says Douglas Holtz-Eakin, former head of the Congressional Budget Office. "And there's simply no way we can address our fiscal problems without coming to terms with Medicare's future."

It's a future that includes 78 million baby boomers, the first of whom are just now getting their Medicare cards. Health policy analyst Jeff Goldsmith, who has studied the boomer generation, says that has been largely overlooked in the debate over the new health law.

"In the first 10 years of health reform being implemented, you'll see 30-some-odd million baby boomers become eligible for and enroll in Medicare," he says.

That's an increase in Medicare's population of about 30 percent.

Unless you change who is eligible for the program -- something no one seems to be suggesting -- there are really only two ways to make Medicare cost less: Pay health care providers like doctors and hospitals less, or make Medicare patients pay more. Until now, neither has been very popular politically.

"Either we proactively take this on as a nation, or international lenders are going to say, 'Forget it, drop dead,' and we'll have an enormous economic crisis."

Goldsmith says one small ray of hope is that the generation coming onto Medicare isn't quite as attached to it as the current one.

"I don't think the typical baby boomer has thought for more than five minutes about the effect of Medicare on their lives, because they're not old," Goldsmith says. "And Medicare is perceived as something for old people."

Still, it may be hard to load much more cost onto patients. Over the past decade, Medicare recipients have already been asked to spend more of their own money out of pocket on health care. According to the nonpartisan Kaiser Family Foundation, median out-of-pocket spending on health care rose from 11.9 percent in 1997 to 16.2 percent in 2006.

Or, as President Clinton's Medicare chief Bruce Vladeck puts it more succinctly, "What people don't understand about Medicare is how crappy the benefit package is."

Asking Medicare beneficiaries with higher incomes to pay more -- another popular idea among would-be deficit reducers -- probably won't fill the gap, either. Vladeck says that's because there probably won't be that many high-income boomer beneficiaries.

Then there's what Vladeck calls the regional politics of Medicare. Because the program is so large, and health care is so expensive, Medicare winds up being a major source of federal funding in virtually every congressional district. That leads to politicians often wanting to boost funding rather than cut it.

Vladeck says that scene played out repeatedly during this year's health care overhaul debate, with members from "these allegedly conservative parts of the country saying, 'This bill is too expensive and we can't afford it,' but holding out for special treatment in Medicare payments to providers in their districts."

There's one other big problem stemming from the new health care law, Goldsmith says. It made a lot of funding reductions to Medicare providers -- about a half-trillion dollars over the next 10 years -- but uses that money to help pay for expanded coverage for the rest of the population.

"That's a significant amount of money. And if that money is to be spent on extending the benefits, it certainly isn't going to be available for deficit reduction," Goldsmith says. "So if you wanted to reduce the deficit, you'd have to go back and challenge the physicians, the hospital community, the health plans to accept additional reductions -- very difficult to do."

Most analysts say getting a handle on health care costs in general would go a long way toward solving the Medicare problem. But no one is sure how to do that, either.