Accessibility links
Millions To Lose Unemployment Benefits At the stroke of midnight Tuesday, a short-term extension of jobless benefits for the long-term unemployed expired as Democrats and Republicans in Congress failed to agree on how those benefits should be further extended. 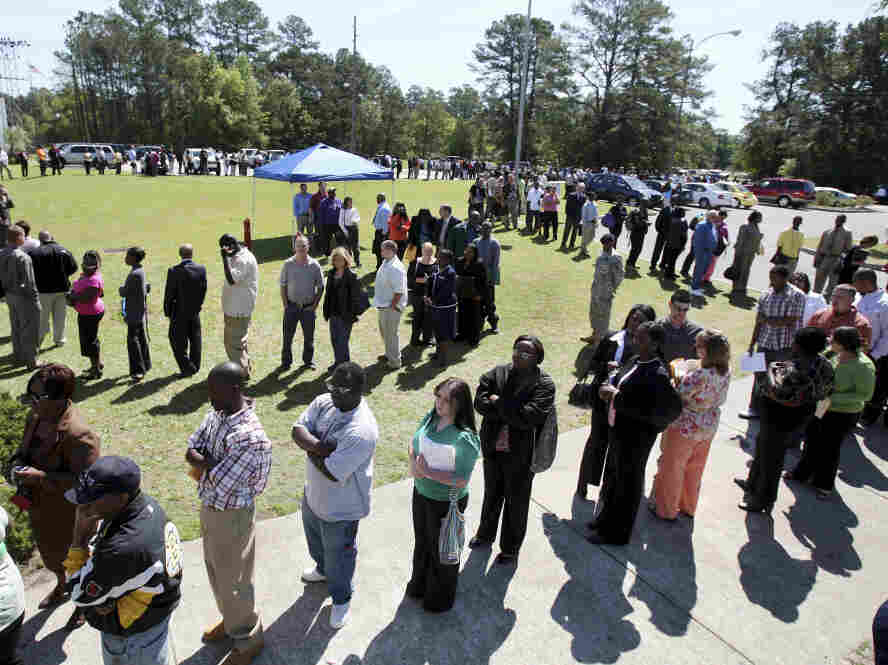 Job applicants stand in a snaking line in Hanahan, S.C., in April 2009 as they wait to get into a job fair. A short-term extension of jobless benefits for some 2 million long-term unemployed expired at midnight Tuesday as Democrats and Republicans in Congress failed to agree on how those benefits should be further extended. Alan Hawes/The Post and Courier/AP hide caption

Things just got worse for the millions of Americans who have been unemployed for up to 99 weeks. At the stroke of midnight Tuesday, a short-term extension of jobless benefits for the long-term unemployed expired as Democrats and Republicans in Congress failed to agree on how those benefits should be further extended.

Congress decided last July to extend long-term unemployment insurance only until the end of November. November has now given way to December, and West Virginia Democratic Sen. John D. Rockefeller lamented that those benefits have run out, just in time for the holiday season.

"I feel terrible about it, particularly in West Virginia where everybody's fighting to survive all the time. And we have to do it," he said. "Why we haven't done it, I don't know."

Map: A Closer Look At An Unemployment Benefits Lapse

The House has already tried once -- and failed -- in the current lame-duck session to extend the jobless benefits. In the Senate, No. 2 Democrat Dick Durbin appeared stricken Tuesday when asked what that chamber planned to do about the 2 million people losing their jobless benefits.

"There's just no current ... plan or schedule for extending these benefits, and I think this is just wrong," he said.

The expiring benefits were not even mentioned by Senate Republican leader Mitch McConnell when he spoke of the meeting that he and other congressional leaders had Tuesday with President Obama at the White House.

"I think the one thing we clearly agreed on is that first, that we ought to resolve what the tax rates are going to be for the American people beginning next year," he said.

Democrats say Republicans' insistence on extending expiring tax cuts for even the highest income levels shows that they are tone-deaf to the plight of the unemployed.

"I don't know how we can sit down and talk about tax cuts for people who have jobs at the highest income categories and ignore the suffering and struggles of people who are unemployed through no fault of their own," Durbin said.

When asked why Democrats didn't bring it up on the Senate floor, Durbin said they didn't have the votes.

"It needs to be part of a package to attract Republican votes, and we found the last time around, I think, we had two Republican votes -- that wouldn't be enough," he said.

The lift just got heavier for Senate Democrats with the swearing in this week of Illinois Republican Mark Kirk. Asked whether he would support extending the jobless benefits, Kirk took a stance most Republicans take: "If it's paid for by cutting other items in the budget, I will be a yes vote. If it's added to further debts of the United States, no."

Late Tuesday, Rhode Island Democratic Sen. Jack Reed defended his party's proposal to extend unemployment benefits for a year without cutting other items in the budget.

"We've always done it on an emergency basis, because it truly is an emergency," Reed said. "We haven't sought to offset it, because we've always determined that it was necessary to get the money to the people who could use it, who needed it desperately, and we should do that again."

Reed then proposed that the Senate take up the extension. Massachusetts Republican Sen. Scott Brown objected, even as he expressed sympathy to onlookers in the Senate gallery for those losing their benefits.

"Make no mistake, I agree that they need help, but I look at it as: Are we going to do it from the bank account, or are we going to put it on the credit card?" he said.

Democrats in turn rejected Brown's proposal to cut other government funding to pay for more jobless benefits. Both sides say the solution may be to attach those benefits to a deal extending the Bush-era tax cuts.