Accessibility links
Liberals: Obama Doesn't Compromise, He Caves Liberals see the president as a bad negotiator, willing to sell the farm for nothing. They point to concessions he has made on energy policy, health care and government spending -- without guarantees of getting anything in return from Republicans. 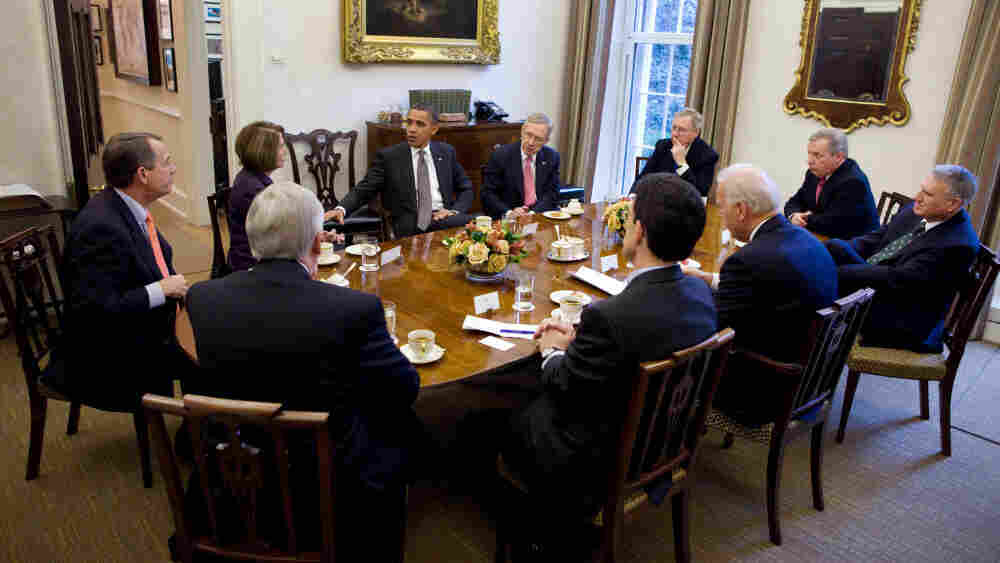 In this handout image provided by the White House, President Obama (center) and Vice President Biden (across the table from Obama) meet with congressional leaders in the President's Private Dining Room on Tuesday. The White House/Getty Images hide caption

President Obama's team is deep in negotiations with Congress over how to find common ground on the fate of the Bush-era tax cuts. And liberals are afraid that the White House may be too quick to cede ground to Republicans without securing concessions in return.

That concern is not unique to the tax-cut debate. People on the left have been concerned about Obama's negotiating style for some time now.

In contrast, Senate Republicans sent Majority Leader Harry Reid a letter Wednesday with what amounts to an ultimatum: "We will not agree to invoke cloture on the motion to proceed to any legislative item until the Senate has agreed to fund the government and we have prevented the tax increase that is currently awaiting all American taxpayers."

In other words, vote on tax cuts and spending bills now, or forget about everything else you want to get done during the lame-duck session. It's the kind of strong, unified negotiating posture Republicans have become known for in the past two years.

But to the dismay of liberal activists such as Justin Ruben, executive director of the group MoveOn, Obama has developed a different reputation.

"Looking right now at the tax cuts -- the White House [is] signaling willingness to pre-emptively cave on what is effectively a tax bailout to millionaires," Ruben says. "I think it's profoundly upsetting to people."

Liberals see the president as a bad negotiator, willing to sell the farm for nothing.

For example, nine months ago he angered environmentalists with a surprise announcement that offshore oil and gas exploration would be expanded.

He seemed to be giving Republicans a bargaining chip without getting anything in return. Indeed, the energy bill that Obama wanted died in the Senate for lack of Republican support.

In the health care debate, the White House abandoned a public option without winning any Republican votes for the concession.

And earlier this week, Obama once again gave Republicans something they wanted, against the wishes of many liberal groups, when he proposed a two-year pay freeze for civilian federal workers.

At a White House briefing the day of that announcement, Jonathan Weisman of The Wall Street Journal asked spokesman Robert Gibbs about the president's negotiating style.

"Why does the president go out and make these proposals at a podium, instead of behind closed doors with your political adversaries in a negotiating position, where you might be able to get something in return?" Weisman asked. "What is the president getting in return by making this gesture?"

Simply making the statement and expecting them to come along and say, 'Yeah, you did the right thing. We're going to do the right thing.' I really think that's naive and certainly not realistic.

"I think $2 billion in savings next year and $28 billion over five," Gibbs returned.

When he was pressed, Gibbs answered in a less flippant way. "The president makes a series of decisions that he thinks are in the best interests of the country -- not as a bargaining chip or a bargaining tool, but because it was the right thing to do."

This has always been part of Obama's narrative. His brand of politics rises above the fray.

"I don't really understand that fully," says Jeswald Salacuse, who teaches international negotiations at Tufts University's Fletcher School of Law and Diplomacy. "Simply making the statement and expecting them to come along and say, 'Yeah, you did the right thing. We're going to do the right thing.' I really think that's naive and certainly not realistic. Policy is a matter to be negotiated. It's a messy business, there's lots of give and take, but at the end of the day, that's the way it's done."

Experts on negotiation say that when Obama publicly volunteers to concede something that Republicans want, a principle comes into play called "reactive devaluation."

Explains Mike Wheeler of Harvard Business School: "If I give you something that you haven't asked for or worked for, you tend to underappreciate it. It's quite different if you've got to pull it out of me."

A Disdain For Negotiating

Even some Republicans share this view of the president as a poor negotiator.

"It's sort of like telegraphing your passes in basketball. It's easy to steal a pass," says Jim Walsh, a former congressman from upstate New York, now with the lobbying firm K&L Gates.

He says this kind of politicking just is not in Obama's blood.

In fact, this president has always expressed disdain for the negotiating games that make up the daily routine in Washington.

But it is a game that he is in, whether he wants to play it or not.