Accessibility links
Must-See Movie Selections For The Giving Season Critic John Powers has a theory about movies: The best gifts to give aren't necessarily the most recent hits. His 13 picks for the 2010 holiday season include a Charlie Chaplin classic, a Charles Laughton masterpiece and one of the greatest documentaries ever produced. 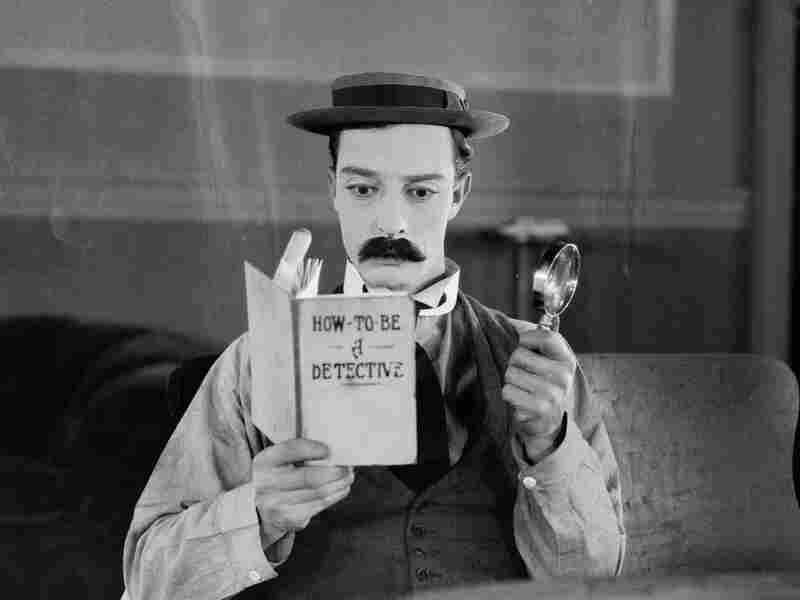 A newly mastered home-video version of Sherlock Jr., directed by and starring Buster Keaton, was released this year on Blu-ray and DVD. John Powers says this "triumph of visual imagination" is one of the top picks for holiday gifts. Kino hide caption 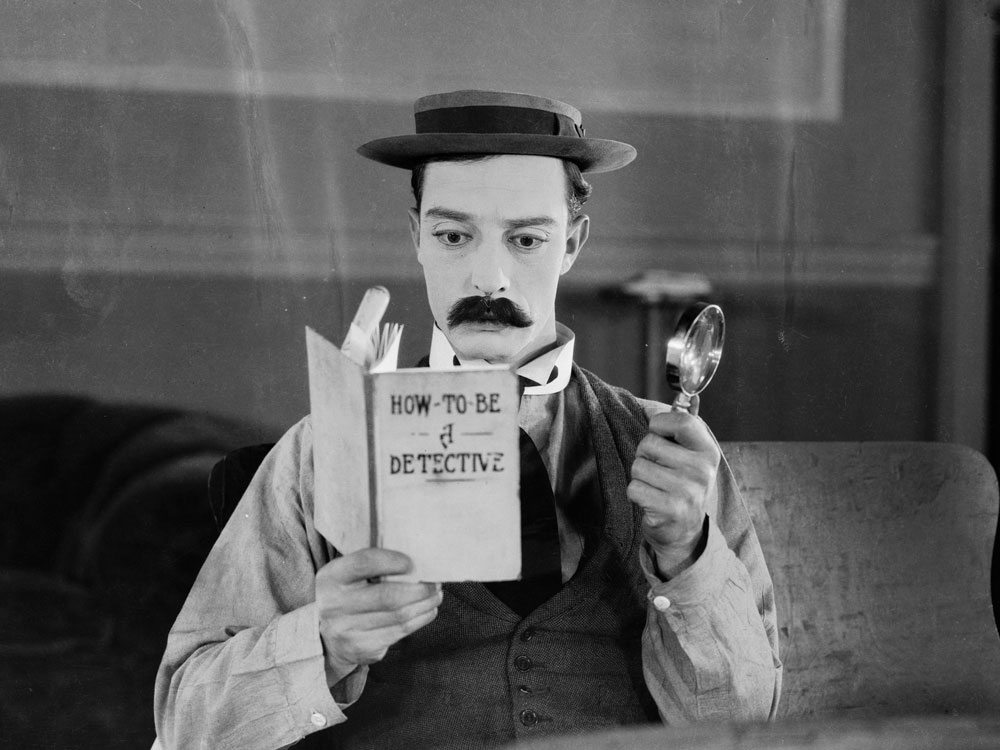 A newly mastered home-video version of Sherlock Jr., directed by and starring Buster Keaton, was released this year on Blu-ray and DVD. John Powers says this "triumph of visual imagination" is one of the top picks for holiday gifts.

You hear a lot of talk these days about how home-video sales are being murdered by online streaming. Maybe so, but you wouldn't know it from all the people who ask me which new DVDs or Blu-rays they should give as holiday gifts. Although I try to tailor my replies to whomever I'm talking to -- yes, I'm a boutique critic -- my general rule is always the same: A good disc is one you can watch over and over because it takes you into a whole new reality.

That's why I start by recommending Sherlock Jr., Buster Keaton's buoyant 1924 comedy in a gorgeous new version from Kino. Keaton plays a movie projectionist who steps into the film he's projecting and becomes the great detective Sherlock Jr. What follows is a triumph of visual imagination.

In the most amazing sequence, Keaton sits on the handlebars of a motorcycle and drives himself through Los Angeles as cars whiz around him and trains nearly flatten him. Each time I see it, I'm dazzled by how much more inventive comedy was back when comedians had to be able to, you know, do funny things, rather than be propped up by digital effects or adolescent one-liners about sex.

Of course you can't recommend Keaton without also recommending Charlie Chaplin, whose 1936 classic Modern Times is just out from Criterion. Chaplin grew up poor and -- more than anyone in Hollywood history -- made movies that took the side of those without money. While its story is simple, Modern Times contains some of the great iconic sequences in film history -- everything from the tramp being literally sucked into the gears of a machine to the sublime poetry of Chaplin and Paulette Goddard roller-skating through a closed department store filled with things they can't afford to buy. 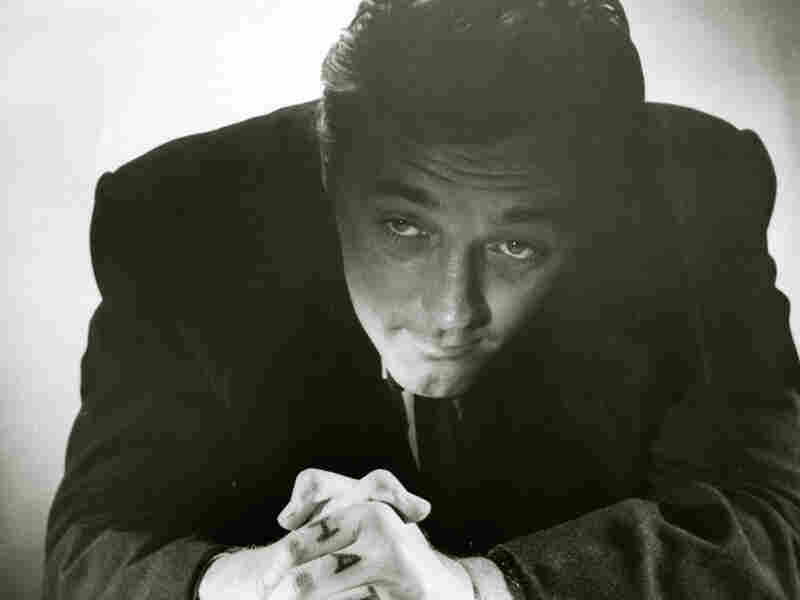 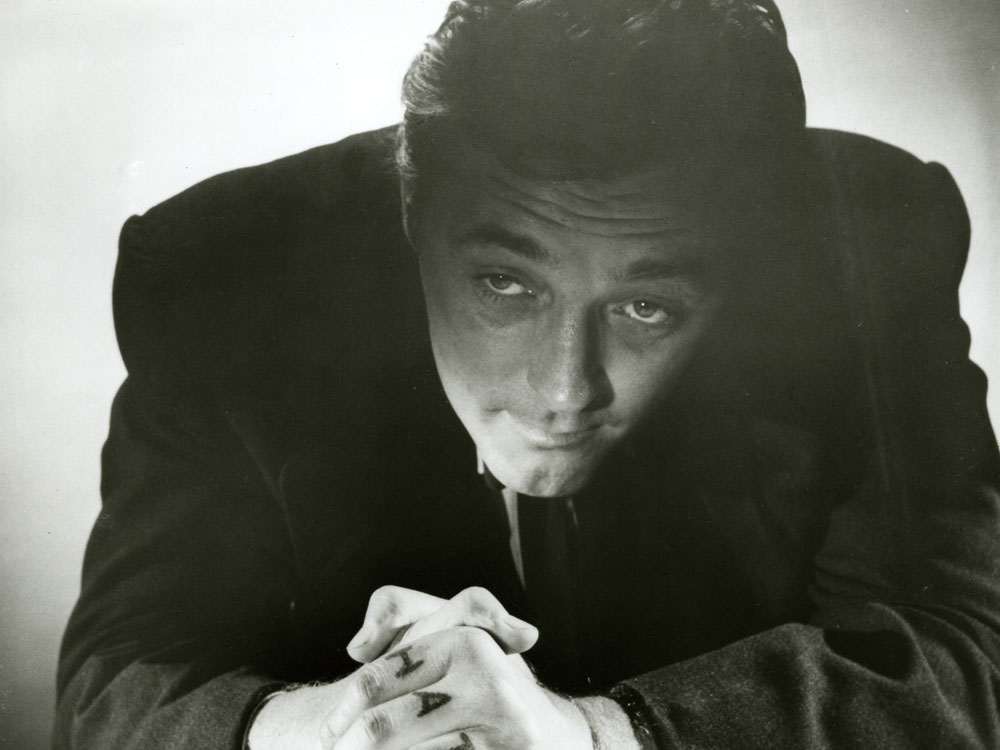 There's far darker poetry at work in Charles Laughton's masterpiece The Night of the Hunter, which in Criterion's new edition looks better than I've ever seen it. The story centers on two children, John and Pearl, whose mother marries a psychotic preacher, played with sinister charisma by Robert Mitchum. The preacher's true aim is getting his hands on the 10 grand their real father stole in a robbery.

Night of the Hunter is about the battle between love and hate -- the preacher famously has these words tattooed on his hands -- and what makes this one of the greatest American movies is the way it uses talismanic imagery and haunting music to conjure up a child's-eye view of a world that's at once terrifying and magical. Certainly few screen characters are more wondrously benevolent than the kids' savior, a radiant old woman played by Lillian Gish. As loving as the preacher is hateful, she likes to quote the Bible's injunction, "Beware of false prophets."

The cost of ignoring this warning is clear in A&E's remastered Blu-ray release of The World at War, a 26-hour series that remains the best thing television has done on World War II. Made in the '70s, this is documentary in the grand old style. You'll find no bogus re-creations, no flashy editing, no trendy Oxford historians walking around and preening for the camera. Instead, The World at War -- with its well-written voice-over read by Laurence Olivier -- actually tells you what happened in World War II.

And it does it with archival footage that takes your breath away. Cameramen were seemingly everywhere back then, and so we get to see how things happened -- Nazi rallies more spookily surreal than anything in Harry Potter, Siberian soldiers skiing into battle, radio announcers watching planes bombing ships and calling the action as if it were a prizefight. We also see a reality our government and media don't like us to see anymore -- the actual cost of war, be it dead bodies or the boundless devastation of ordinary lives.

If any one man casts a shadow over The World at War, it is, of course, Hitler, who used economic bad times to turn populist resentment into murderous dictatorship. Watching this Great Dictator in action reminds us to beware of those who are eager to stoke political hatreds. You see, that's the thing about false prophets. There are always plenty to go around. 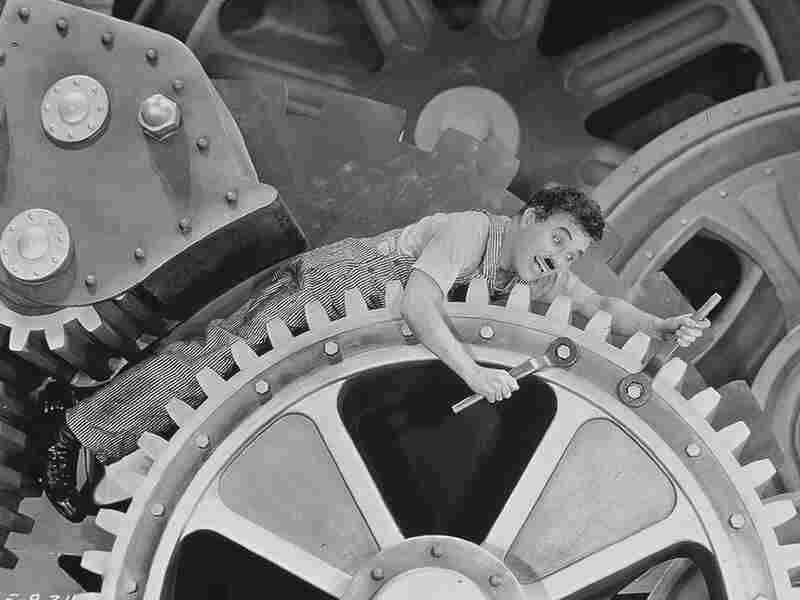 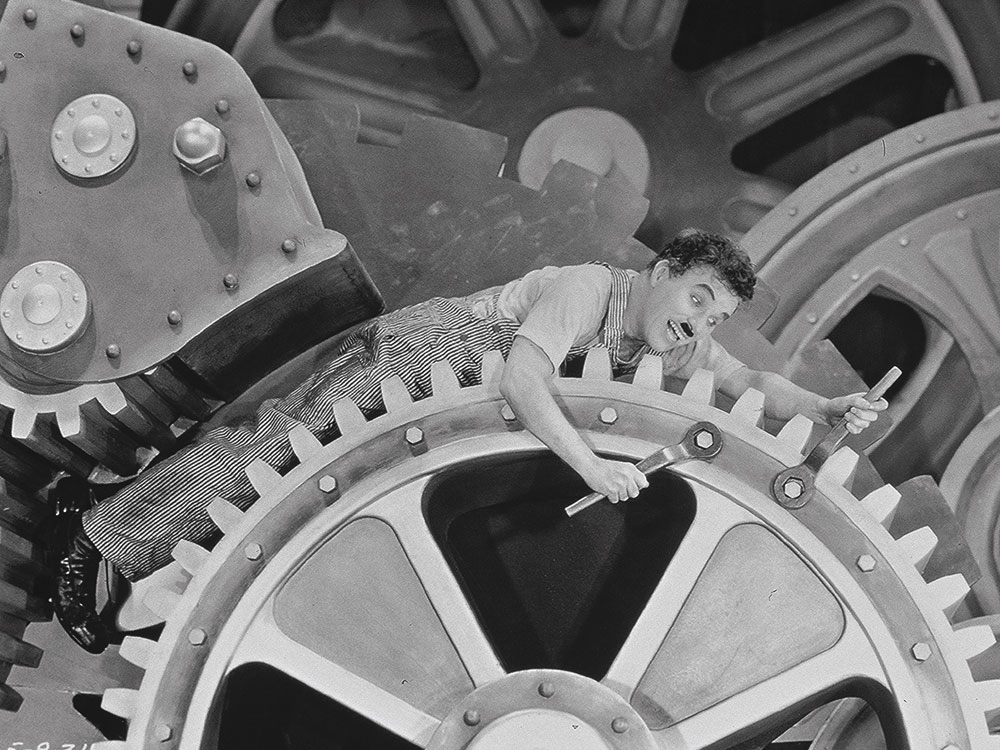 The Night of the Hunter (1955) -- Directed by Charles Laughton

Prime Suspect: The Complete Collection (1991) -- One of the landmark shows in television history, this series created something new: a female police officer, DCI Jane Tennison, struggling to work in a man's world that wanted to stay a man's world. Terrifically entertaining, it boasts a superb sustained performance by Helen Mirren in what may well prove her defining role.

The Quintessential Guy Maddin! Five Films from the Heart of Winnepeg (DVD, 2010) -- That giddy exclamation point says it all. This four-disc set boasts five strange and beautiful films by one of Canada's -- no, make that the world's -- great originals. From a vampire ballet film (Dracula: Pages from a Virgin's Diary) to a delirious World War I melodrama (Archangel) to a family psychodrama bursting with hockey (Cowards Bend the Knee), this collection has it all -- including The Heart of the World, one of the most brilliant short films ever. 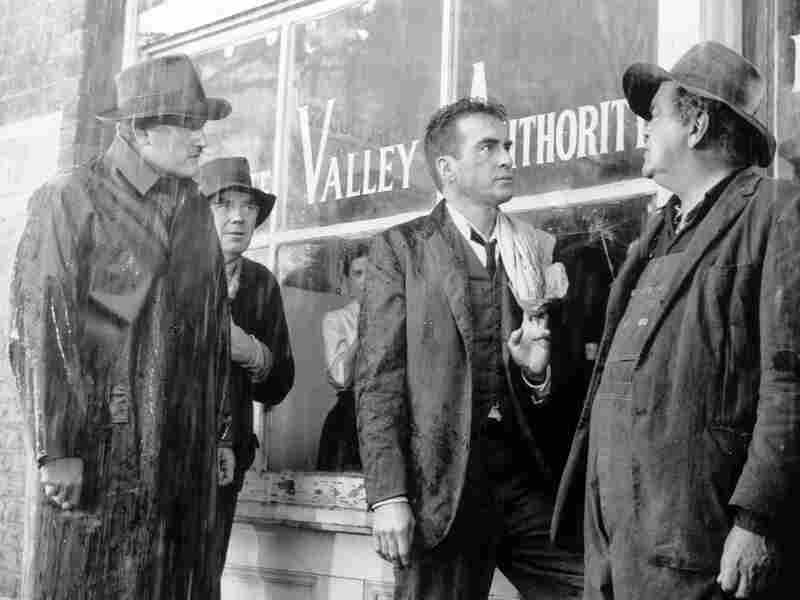 The Elia Kazan Collection (2010) -- A box set featuring 15 of Kazan's key films, including A Streetcar Named Desire, On the Waterfront and Wild River, a 1960 film set in the Tennessee Valley in the 1930s. It features Montgomery Clift as a field administrator who must convince an ornery old matriarch to leave a plantation before it's flooded. (I reviewed this set on Fresh Air in November.)

Chaplin at Keystone: An International Collaboration of 34 Original Films (2010) -- Perhaps 2010's most triumphant act of restoration, this amazing collection of movies carries Chaplin from his early days as a little-known Brit vaudeville performer through the gradual discovery of his Tramp character to his emergence as not just the world's biggest star but one of the major cultural figures of the 20th century. It's like watching a caterpillar emerge from its cocoon as a giant condor.

La France (2007) -- Directed by Serge Bozon. You've never seen anything quite like this sui generis World War I movie, which boasts everything from nods to The Night of the Hunter to a heroine (Sylvie Testud) dressed as a male soldier to the troops periodically breaking out into '60s-sounding pop songs. Mysterious and wonderful. 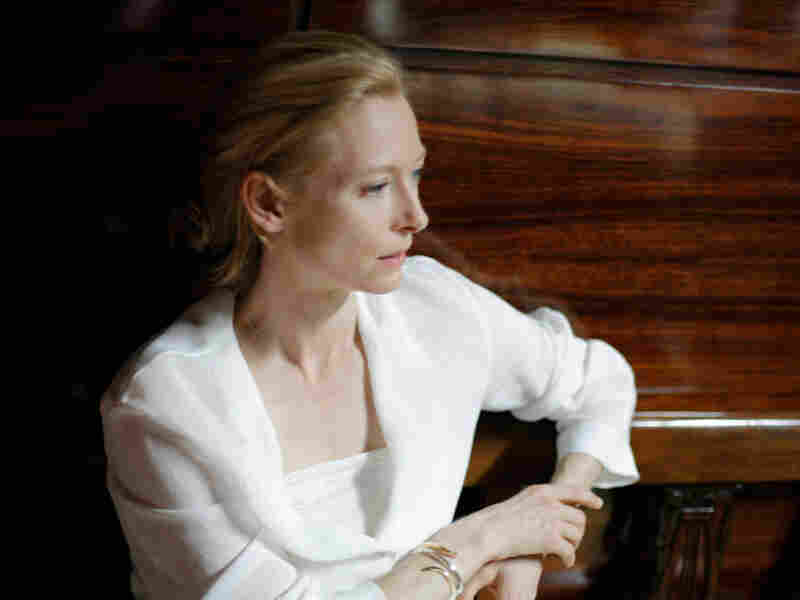 Tilda Swinton stars as Emma, the Russian-born wife of the head of a Milanese dynasty, in Luchino Visconti's I Am Love. Magnolia Pictures hide caption 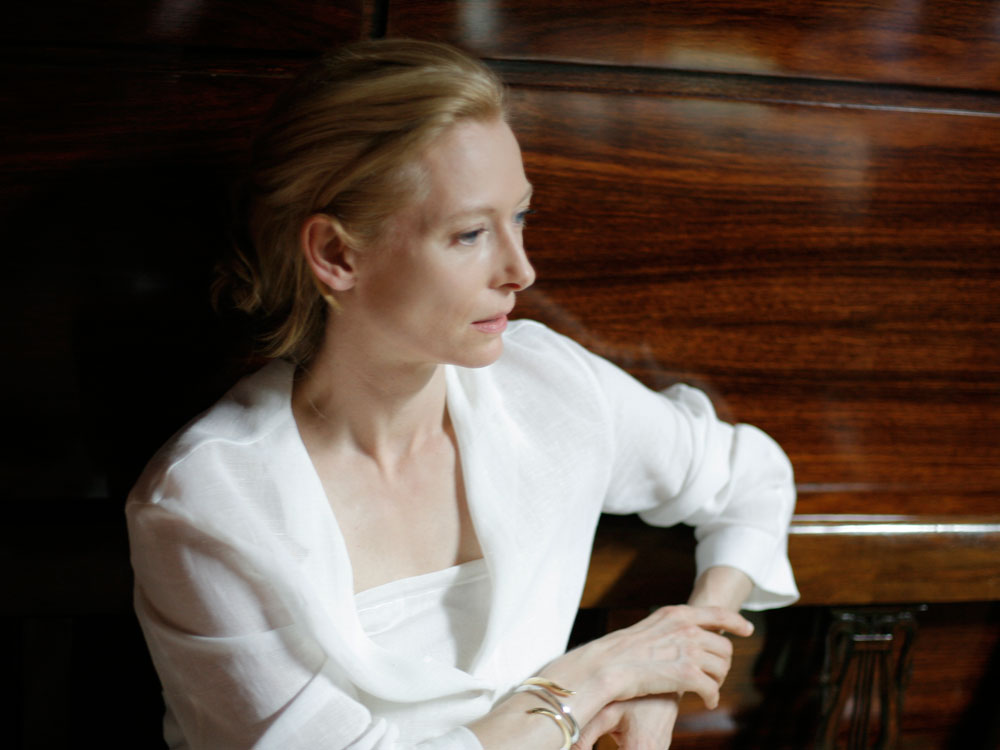 Tilda Swinton stars as Emma, the Russian-born wife of the head of a Milanese dynasty, in Luchino Visconti's I Am Love.

Black Narcissus (1947) -- Written and directed by Michael Powell and Emeric Pressburger and based on the novel by Rumer Godden, this gripping melodrama tells the story of a group of Anglican nuns who take over a palatial old harem 9,000 feet up in the Indian Himalayas and start a convent amid fierce winds, devouring abysses, Eastern sensuality and a fierce sense of isolation. Talk about trouble. Torn by the nuns' memories, fears and sexual desires -- the whole movie is fraught with eroticism -- the convent starts to boil over with a hysteria closer to Twin Peaks than the New Testament. Unforgettable.

The Bong Joon-ho Collection (2010) -- If I had to name my favorite new filmmaker of the past decade, it would be South Korea's Bong Joon-ho, who knows how to make supremely entertaining movies but fill them with shrewd social commentary. This must-have set of three films reveals Bong's enormous range. It features a terrific black comedy, Barking Dogs Don't Bite, alongside the best monster movie since, oh, Alien -- it's titled The Host -- and his latest, Mother, a riveting murder mystery that is partly about the madness of maternal love.

Fantasia/Fantasia 2000 (2010) -- After years off the market, Uncle Walt's most audacious project is back and looking better than you've ever seen. Feed your head.

The Collected Novels of Jose Saramago (2010) -- Yes, I know, I know. This is an e-book, not a disc. But what an e-book. For less than $30 you can get all 13 of the novels by this Portuguese titan, who died in June. Saramago wasn't merely a Nobel laureate. He was one of the handful of truly great writers in the past half-century, a man who belongs on your e-shelf along with Shakespeare, Dickens, Tolstoy and whoever else you think is going to last.