Sanrio, the Japanese company that defined cute, is celebrating its 50th anniversary this year.

Its star, Hello Kitty, and more than 400 other cartoon characters continue to be popular with adults and children.

Just ask Cici Cortes, 5, about Hello Kitty -- a Japanese bobtail cat who loves baking cookies and was a UNICEF ambassador.

"She has bows in her hair, she wears cute clothes, and she has cute little whiskers," she says. "She doesn't have a mouth."

It just makes you happy.

Hello Kitty is the most recognizable of Sanrio's marketing sensations. Since 1974, her image has adorned everything from small plastic coin purses and pencils, to toaster ovens and TVs with the sunny philosophy that small gifts create big smiles.

"It's a little battery-operated thing," says New York Times writer Ken Belson. "It's a personal massager, and they see it as an innocent product meant for tired elbows and shoulders."

Belson, author of Hello Kitty: The Remarkable Story of Sanrio and the Billion Dollar Feline Phenomenon, says the company has lasted because of its winning formula: getting generations hooked on cute, even while unintentionally creating kitsch.

Belson says some fans have twisted kitty in many ways "because it's so pure, it's become sickly and a pendant of mass consumerism people have come to hate. That's not something the company would ever want to admit or promote, but it's something that's taken on an extra life of its own -- or nine extra lives."

The company hosts two theme parks and has produced films, books and video games starring Hello Kitty, Chococat, Badtz-Maru, My Melody and others.

Sanrio rakes in about $5 billion a year, thanks in part to its unique collaborations. That includes fashion designers and artists.

And now a new generation of artists is reinterpreting Sanrio's iconic images.

A Muse For Artists

In Los Angeles, Sanrio celebrated its anniversary with a "Kitty in Pink" retro-'80s prom party, a carnival and an art exhibition.

"Hello Kitty as well as all the Sanrio characters have been muses for the artists," says Janet Hsu, the president of Sanrio Inc.

The exhibition features paintings, knitted artwork and a jellybean mosaic. One installation, called the Hello Kitty Fight Club, features a sculptured kitty with a black eye and broken paw. She appears to be bleeding pink from the top of her head. 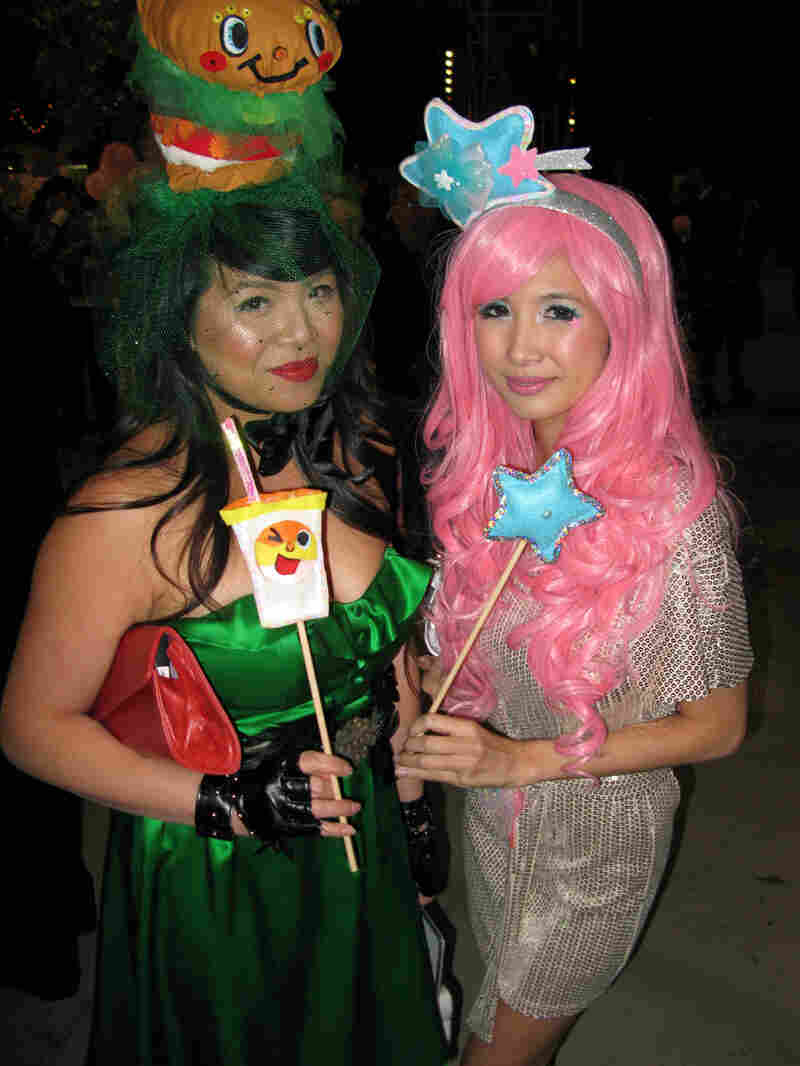 "Yeah, you see little splatterings of blood," says Hsu, who says she doesn't mind the edgy version. "Our characters are very Zen-like and they're pretty much canvases for everyone to interpret, whether they're a fan, whether they're an artist."

Cartoonist and designer Paul Frank, who's best known for his character Julius the Monkey, paid homage to Sanrio's frog Keroppi in vinyl.

"It just makes you happy," Frank says of Sanrio's products. He and his wife are so enamored of the company that they have a Hello Kitty grand piano at their home. "I remember in the '70s, my mom would take my sister and I to the Sanrio store, and I remember just sniffing erasers. I love plastic smells."

Painter Gary Baseman says he appreciates that Sanrio isn't afraid of taking artistic risks. His painting of Hello Kitty and friends was part of the art show.

"A lot of my characters seem to drip and drool, so I wanted to take my own world and bring all the wonderful Sanrio characters to come in and play," he says.

And costume designer Jason Alpert, who has outfitted the outrageous comedy TV and film characters Ali G., Borat and Bruno, painted a mockup of a masterpiece for the anniversary.

"I've re-created The Last Supper, replacing Jesus and his disciples with my favorite Hello Kitty characters," Alpert says. "I've called it Pass the Ketchup. It just looked like more fun, and you know the whole thing is, Hello Kitty is fun."

Alpert's version of The Last Supper will be on display with other artistic Sanrio renderings at the prestigious Art Basel show in Miami this weekend.