Accessibility links
Ballerina Struggles To Unleash 'Black Swan' Within December is Oscar bait season at the movies, when there's a surge of films coming into theaters before the end of the year to qualify for the Academy Awards. One of the movies in that race opens Friday: Black Swan.

December is Oscar bait season at the movies, when there's a surge of films coming into theaters before the end of the year to qualify for the Academy Awards. One of the movies in that race opens Friday: Black Swan.

It is Friday morning, which is when we usually hear from our film critic, Kenneth Turan. He's been watching the new movie "Black Swan," in which ballet is a contact sport.

KENNETH TURAN: Ballerina Nina, played by Portman, is introduced as a timid soul who's labored for years in the corps de ballet without a peep of protest.

M: (as Nina Sayers) I had the craziest dream last night, about a girl who's turned into a swan, but her prince falls for the wrong girl and she kills herself. He promised to feature me more this season.

M: (as Erica Sayers) Well, he should. You've been there long enough, and you're the most dedicated dancer in the company.

TURAN: Nina's artistic director, played by Vincent Cassel, is thinking of offering her the lead in "Swan Lake," but he's not sure she has what it takes to play the black swan part of the role.

M: (as Thomas) Seduce us! Not just the prince but the court, the audience, the entire world. Come on. Like a spider spinning a web. Attack it, attack it, come on.

TURAN: Because Nina starts out crazy, there is nowhere of interest for her character to go. But expecting subtlety from a Darren Aronofsky film is like expecting Pixar to announce a slasher movie. Not in this lifetime.

INSKEEP: Ken Turan reviews movies for MORNING EDITION and the Los Angeles Times. And we review more of the week's new movies, not least the con man comedy "I Love You Phillip Morris," at NPR.org.

A Ballerina Falls, And 'Black Swan' Is Born 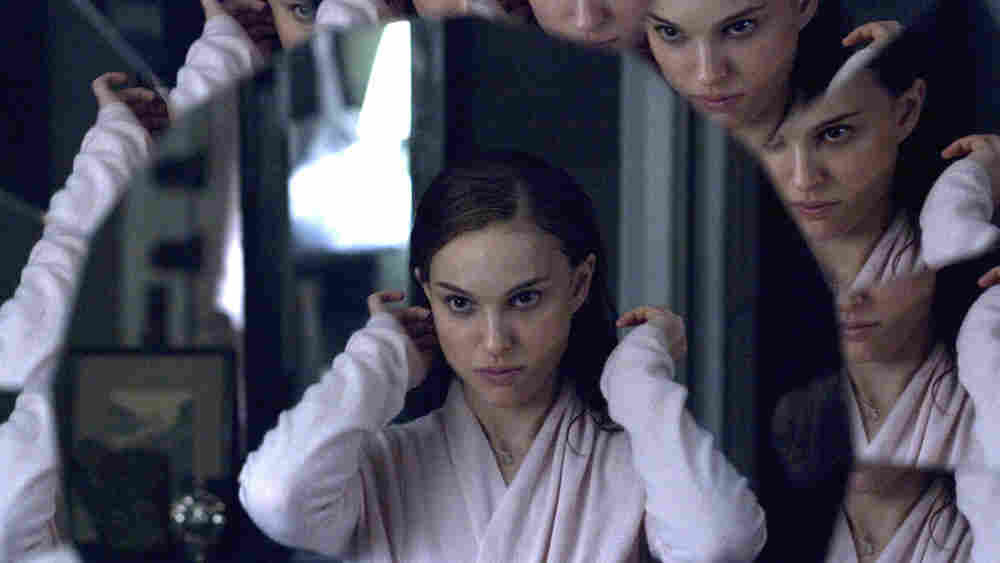 Pushed To The Brink: When Nina, an ambitious ballerina emotionally played by Natalie Portman, is cast as the lead in Swan Lake, her struggle to embrace the dark sensuality of the Black Swan leads to a frightening mental breakdown. Niko Tavernise/Fox Searchlight hide caption

From 'Black Swan' - 'Watch The Way She Moves'

'Watch The Way She Moves'

For all its dazzling allure, Darren Aronofsky's Black Swan, a feverishly psycho thriller set in the hermetic world of classical ballet, proves a meaningless exercise in Grand Guignol exhibitionism. That Natalie Portman does everything but turn herself inside-out to play Nina, a profoundly troubled ballerina, only underscores the vacuity of the film surrounding her: It's a punishing, tutus-to-the-wall performance that screams for more substance than Aronofsky is willing, or able, to provide.

Rarely offscreen for even a second, Portman embodies an arpeggio of emotions (and portrays many of them en pointe), but her primary expression is one of holy terror. It's in her eyes when she flinches from her overbearing mother (Barbara Hershey), with whom she shares a small Manhattan apartment. It tightens her mouth when she tries to persuade Leroy (a mesmerizing Vincent Cassel), the company's imperious ballet master, that she can handle the lead in the upcoming production of Swan Lake. It dominates her reaction to Lily (Mila Kunis), a sexy new dancer and her chief rival for the role.

Stoking this fear, Aronofsky fills the movie with lookalikes (especially Winona Ryder as a cast-aside principal dancer) and mirror images of Nina in weirdly distorted reflections. As she scuttles from rehearsal room to subway, down endless corridors and dark alleyways, Aronofsky's camera is a silent, unshakable stalker. This constant display of high anxiety is supposedly a manifestation of Nina's struggle to portray the dangerous, seductive Black Swan (the virginal White Swan is right up her artistic alley), but what it's really signaling is her struggle to achieve sexual release.

The virgin/whore dichotomy is of course the heart of Swan Lake, two sides of the same character. But the notion that a woman's happiness -- nay, her very sanity -- requires releasing her inner slut is at the heart of this film, and Aronofsky turns that message into a hysterical opera of mutilation and hallucination. Bombarding his quivering heroine with aggressive sexual imagery (a lascivious old codger in a subway car, the word "whore" on her makeup mirror), Aronofsky chastises her frigidity with perversions of intimacy -- though it was probably unnecessary to belabor the point with a gratuitous botched-masturbation scene. 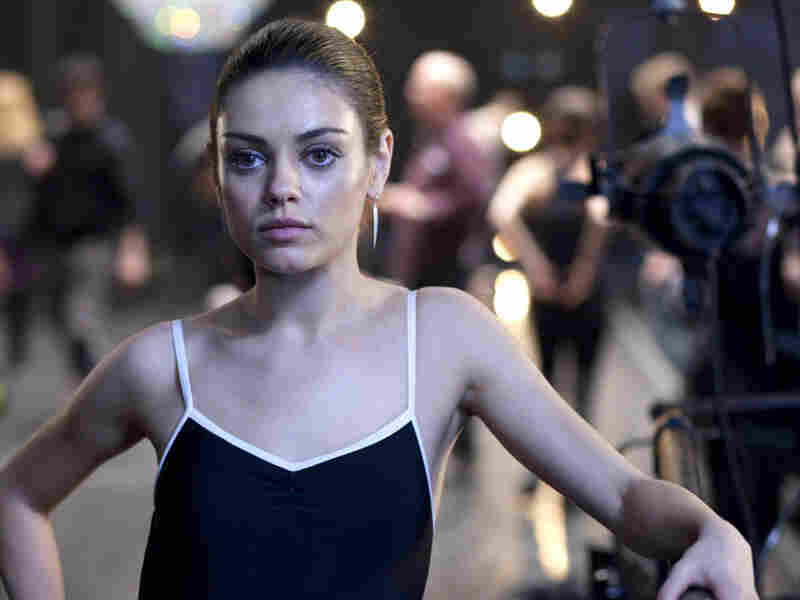 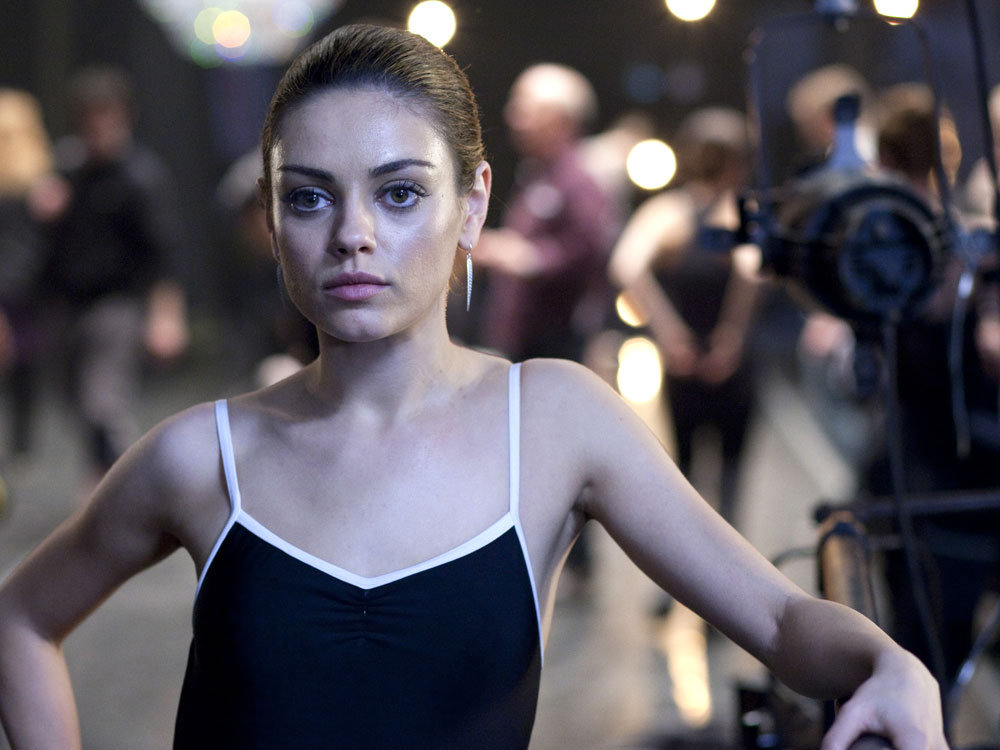 Like Aronofsky's previous film, The Wrestler, Black Swan celebrates the body as battleground. Nina's battered toes and bruised skin, along with intimations of eating disorders and cutting, render the ballet world a hive of physical and psychological abuses. So enamored of that idea is Aronofsky that he pursues it into the realm of the fantastical: Feathers thrust from a wound in Nina's back, giving visual expression to her psychoses, and in one profoundly horrible sequence her knees snap into the configuration of birds' legs. Scenes like these remind us that Aronofsky, a superbly imaginative stylist, has a real gift for the chilling; it's when it comes to warmth that he often falls short.

Gorgeous and glacial, ecstatically photographed and wonderfully acted -- Cassel's wordless play of expressions when Nina finally kisses him in character as the Black Swan is remarkable -- Black Swan feels frustratingly incomplete. Obsession and repression are powerful themes, but you have to take them somewhere. It's not enough simply to emulate Dario Argento's glam-goth palette, David Cronenberg's bodily invasions, Adrian Lyne's softcore menace (a nightclub scene is right out of Jacob's Ladder) and Brian De Palma's demented sensibility. For all the influences on display, the one filmmaker who might have taken Black Swan from the lurid to the lyrical is Polanski: Take a look at Catherine Deneuve cowering in her apartment in Repulsion and tell me I'm wrong.