Accessibility links
Hope For Life After Deficit Plan's Death President Obama's deficit commission couldn't garner enough support to send its plan to Congress. But the plan could generate more debate and actual progress on the deficit. Illinois Democrat Jan Schakowsky, who voted against the plan, and Republican Rep. Jeff Flake of Arizona discuss why they think the plan fell short and how to move forward. 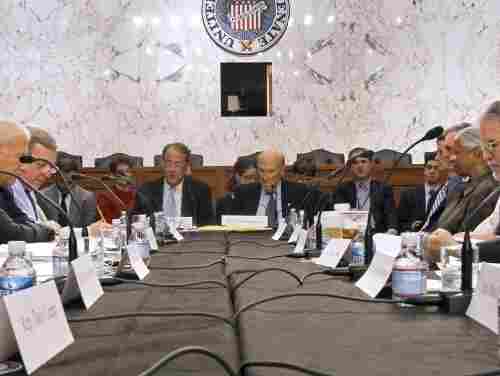 The Bowles-Simpson debt commission meets in a Senate hearing room on Wednesday.

The president's bipartisan deficit commission met Friday to vote on its latest proposal to rein in the deficit. Only 11 of the 18 members said yes to the proposal known as "The Moment of Truth"; 14 were needed to send the plan to Congress.

The proposed changes in Social Security, taxes, domestic spending and health care would have cut almost $4 trillion from the federal budget and stabilized the national debt at 66 percent of the size of the economy, a level economists say is sustainable. Although the plan did not get enough votes to become an official recommendation to Congress, the 11 votes were more than expected, and President Obama said he and his advisers will study it closely as he puts together his budget.

Jan Schakowsky: Not Under My Watch

One of the 18 members of the National Commission on Fiscal Responsibility and Reform is Rep. Jan Schakowsky. The Illinois Democrat voted against the plan because she thought the budget cuts would hit the middle class too hard.

"We're asking people who have already been sacrificing ... to pay more, for example for their health care, to see cuts in programs for education and job training," she tells guest host Audie Cornish.

"Why should the middle-class people have to pay the tab?" she says.

Schakowsky said her biggest objection to the deficit commission plan is cuts in Social Security and Medicare. Proponents of the proposal argue that individuals need to share more of the costs of these government-funded services.

Schakowsky's own plan proposes modifying Social Security without changing benefits paid out, as well as creating a public option for health insurance, which she says would lower health care costs and allow the government to negotiate drug prices with the pharmaceutical industry to lower costs.

"In other words, there are ways to do it without socking the middle class," she says.

While Schakowsky rejected the majority of the commission's recommendations, a few elements of the report pleased her. Front and foremost, she says, was the fact that the military budget was on the cutting board.

"[That] wasn't a given when we began our commission," she says.

The commission's proposal would cut $100 billion from the defense budget; Schakowsky's plan goes even further, shaving it down by about $110 billion.

Even though members of the commission have spent most of their time talking about budget cuts, Schakowsky says, talk about spending shouldn't get drowned out.

"I hope that there's also talk, though, about the need during this fragile economic recovery to talk about investment, investment as a deficit reduction strategy," she says. "If we don't put more people to work, I don't think we are going to see the kind of recovery that we need."

Rep. Jeff Flake, a Republican from Arizona, has long been one of the strongest advocates for reducing federal spending in the House.

He believes that the only way to achieve real results in deficit reform is for both parties to compromise.

"Republicans need to recognize that if we want lower tax rates then we've got to look at some of these tax expenditures," he tells Cornish.

He admits that calling for an end to any tax cut is "heresy in some circles," but insists it has to be done, and quickly.

"I think Democrats have to recognize we've got to make far deeper cuts than we've been willing to over the past several years," Flake says.

He said he agreed with the proposal's discussion of recalculating Social Security benefits and retirement age, but called the plan a little "too tepid."

The failed deficit commission proposal serves as yet another reminder of the difficulty of cutting the deficit. But Flake insists the proposal wasn't a failed experiment.

"Simply having people see the commissioners stand and say this is something that has to be addressed, now rather than later, perhaps that will help."

He says he hopes members of Congress don't ignore the report when it comes time to make the budget.

"And if we Republicans don't [cut discretionary spending], we'll probably be in the minority in a couple of years," Flake says.