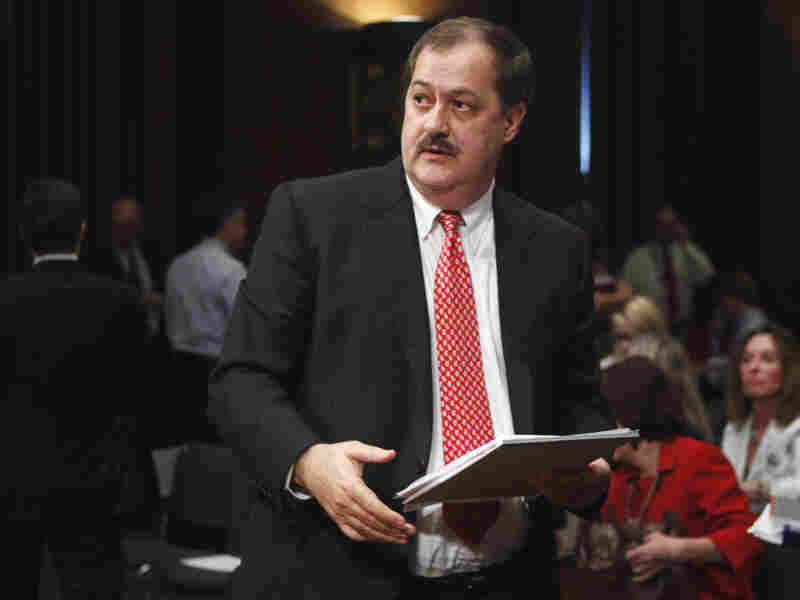 "It is time for me to move on," CEO and board chairman Don Blankenship said in a statement issued by the Massey Board of Directors. Carolyn Kaster/Associated Press hide caption

Eight months after a deadly explosion at a Massey Energy coal mine, CEO and board Chairman Don Blankenship suddenly surrendered control of the company Friday.

"It is time for me to move on," Blankenship said in a statement issued by the Massey Board of Directors. Neither he, nor the board, nor the company provided further explanation.

The unexpected departure comes amid unconfirmed reports that Blankenship opposed the Massey board's consideration of a sale of the giant Appalachian coal producer. The board had announced that it is exploring a takeover.

Blankenship, 60, spent close to three decades at Massey and served as chairman and CEO for 10 years. His tenure was marked by dramatic growth and enviable profitability. The number of employees doubled to 7,300, as did annual revenues, which rose from $1.08 billion in 2000 to $2.7 billion in 2009.

Massey also gained control of vast coal reserves in Appalachia, including metallurgical coal used to manufacture steel. That coal is in high demand right now and is part of what makes the company an attractive takeover target.

Blankenship's reign was also marked by seemingly endless controversy, especially after the massive blast that ripped through Massey's Upper Big Branch mine in West Virginia on April 5. Twenty-nine miners died in that explosion, which ranks as the nation's worst coal mine accident in 40 years.

In the wake of that disaster, Massey's stock price plummeted and left the company undervalued. That also makes it attractive to prospective buyers.

In its statement, the Massey board said Blankenship immediately stepped down from his CEO and board chairman positions and will officially retire Dec. 31. The board recently affirmed a departure package that gives Blankenship a $10 million golden parachute.

Blankenship's retirement has "been a long time coming," says Randolph McGraw, a lawyer in Beckley, W.Va., who represents the families of six of the victims of the Upper Big Branch tragedy. "The destruction he's done will likely never be undone."

That's a reference to the environmental and human costs blamed on Blankenship and Massey's mining practices. Environmental activists say the company is responsible for the poisoning of streams and ground water and the stripping of forests and mountaintops. Other critics detail injuries and deaths at Massey mines and Blankenship's apparent obsession with coal production.

Under Blankenship, Massey has amassed thousands of state and federal safety violations, citations and orders, and close to $13 million in fines. Since the Upper Big Branch disaster, Massey and other coal companies have faced greatly increased regulatory scrutiny. A federal criminal investigation is considering the company's possible role in the April explosion.

Blankenship's sudden exit "brings to a close a long and difficult chapter in the history of the coal industry, one that has all too often been associated with human tragedy," says Cecil Roberts, the president of the United Mine Workers of America. Blankenship drove unions from Massey mines and has kept them union-free.

"This also represents an opportunity for the coal industry in West Virginia and across the country to take a step away from the negative image that has cast a pall over our industry," Roberts adds.

Blankenship and the Massey board have also been the targets of shareholder lawsuits claiming the company's stock was devalued due to the alleged failure to operate Massey mines safely.

"This is a huge victory for what we've been trying to accomplish through our lawsuits," says Badge Humphries, a South Carolina attorney representing several shareholder groups.  Blankenship's retirement, he adds, "is a very good step in the right direction."

Two weeks ago, Blankenship met with a selected group of reporters for more than two hours, trying to shift blame for the Upper Big Branch explosion away from his company and toward federal regulators.

"What we're trying to do is actually to avoid the focus on culpability and figure out what happened," Blankenship said.  "The focus ought to be on the physics, the chemistry, the math, the science, to figure out what the source of the explosion was … rather than trying to point fingers."

Blankenship was scheduled to testify in the joint state-federal investigation of the accident on Dec. 14.

In July, at the National Press Club in Washington, Blankenship ridiculed global warming, environmental activism and federal mine safety regulation. "We certainly would never put profits over safety," he asserted.

But critics point to the litany of safety violations at Massey mines as an indication production came first. Last month, the Labor Department sought a preliminary injunction and federal court supervision of a Massey mine in Kentucky citing conditions so dangerous they presented "a high risk level for a fatal accident … on any given day," according to court documents.

This week, Massey announced it would close that mine.

Humphries believes all this made Blankenship a liability to the Massey board as it sought a possible buyer. "It doesn't take much imagination to believe he was forced out," he says.

Massey President Baxter Phillips replaces Blankenship as CEO. Phillips is also a three-decade veteran of the company. In his statement, Blankenship noted that he and Phillips had worked together for 28 years and "he will provide the company great executive leadership."

That has some concerned that little will change under Phillips. "He's also entrenched there," says Humphries. "He's been Blankenship's right-hand man."

McGraw tried to be positive, saying "I can only hope that the person replacing Don Blankenship will have compassion for the people of Appalachia."