Accessibility links
Who Were The Cowboys Behind 'Cowboy Songs'? A close examination of a collection of cowboy songs recorded more than 100 years ago shows that, despite the popular image of the American West, cowboys were a multiracial, multiethnic group. 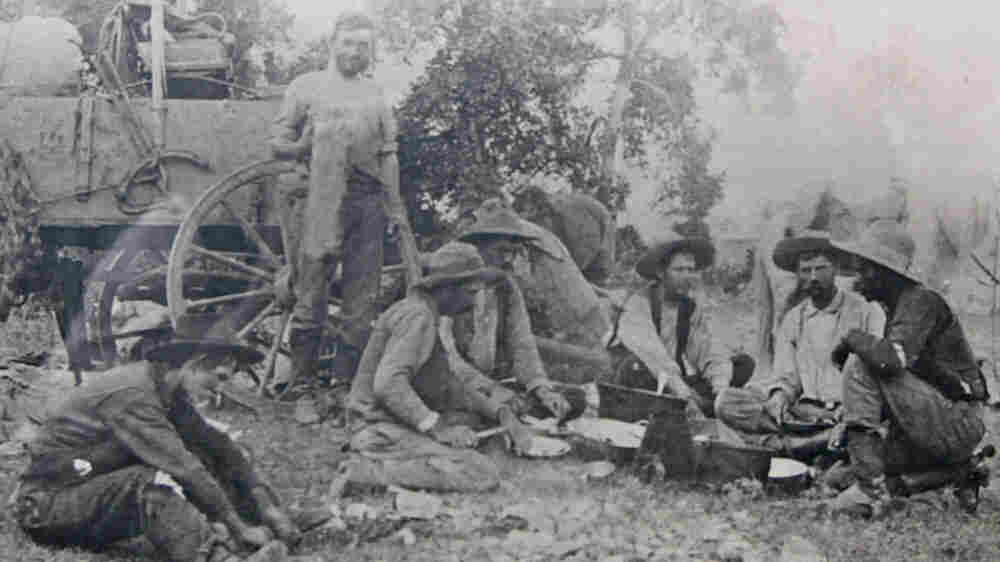 An integrated cowboy crew at mealtime on the Merkeson Ranch in Texas in the 1890s. Courtesy of the Gillette Brothers hide caption 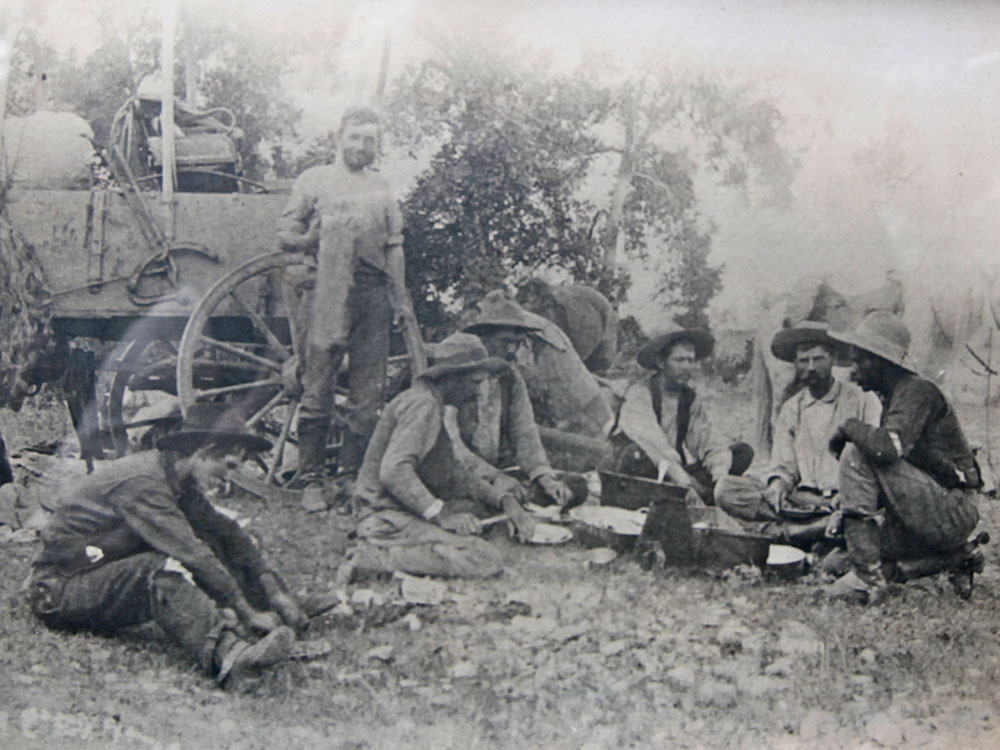 An integrated cowboy crew at mealtime on the Merkeson Ranch in Texas in the 1890s.

Courtesy of the Gillette Brothers

A hundred years ago, a collection of folk music forever re-tuned the American songbook. Cowboy Songs and Other Frontier Ballads by John A. Lomax introduced the country to the music of the American West, and helped propel the cowboy to iconic status. But a close examination of early cowboy music reveals details about some of the very first cowboys that don't fit the usual stereotypes.

In the 1940s, a radio show made for the Library of Congress recorded Lomax talking about his earliest memories of cowboys. The pioneer folklorist had seen firsthand the great trail drives after the Civil War. 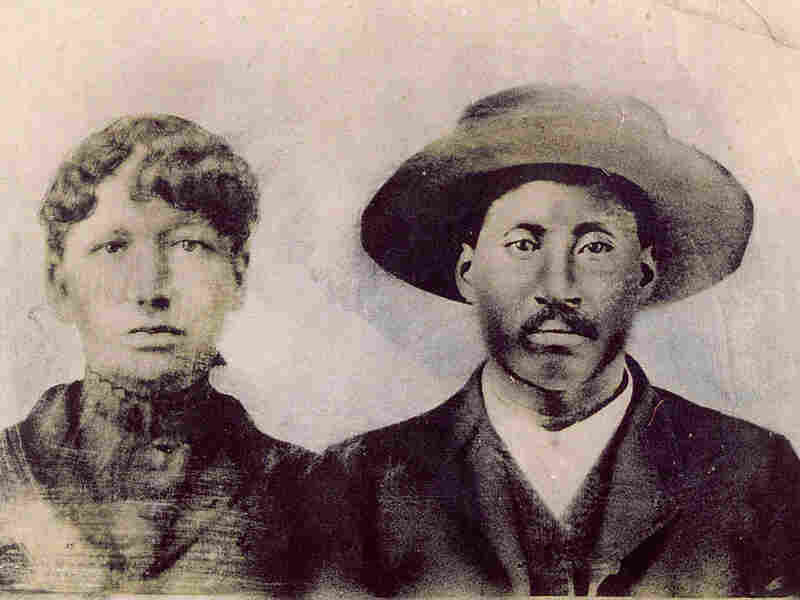 Charley Willis and his wife, Laura, in the late 1800s. Willis is credited with the original version of the classic cowboy song "Goodbye Old Paint." Courtesy of Franklin Willis hide caption 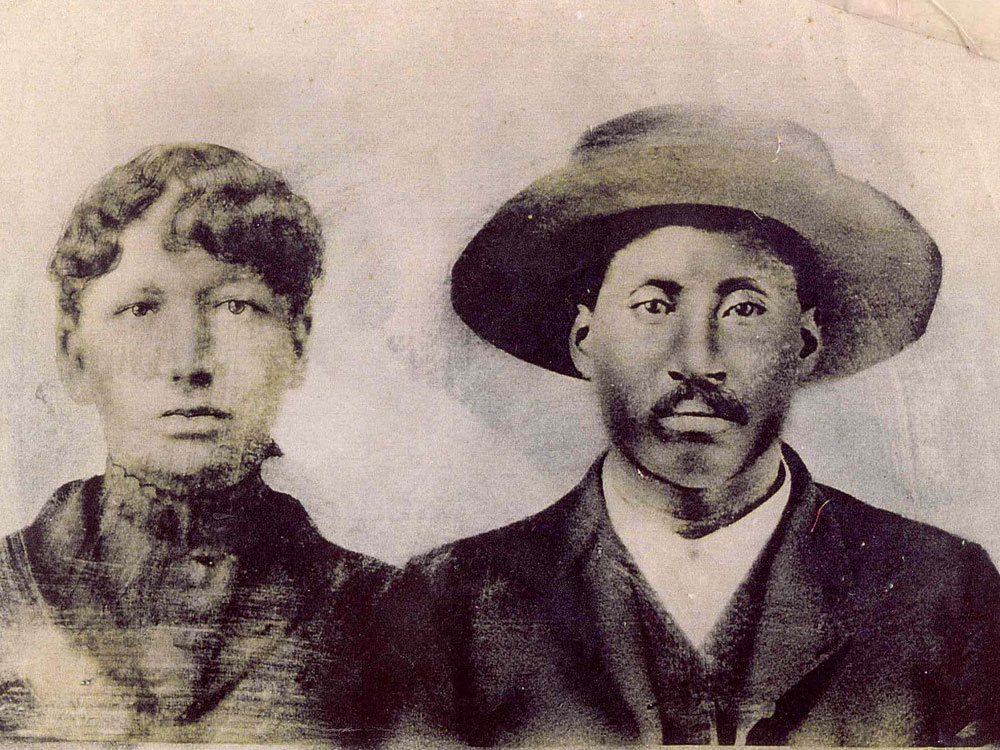 Charley Willis and his wife, Laura, in the late 1800s. Willis is credited with the original version of the classic cowboy song "Goodbye Old Paint."

"I couldn't have been more than 4 years old when I first heard a cowboy yodel and sing to his cattle. I was sleeping in my father's cabin in Texas," Lomax said. "As the cowboys drove the cattle along, they sang, called and yodeled to them. ... They made up songs about trail life."

But just who were these cowboys that Lomax saw? Where did they come from? These questions intrigue Mike Searles, a professor of history at Augusta State University in Georgia.

"There's a popular notion that when you're talking about the cowboy, you're exclusively talking about white cowboys, which of course is not true," Searles says. "Black men were involved in being cowboys very early in the history of our country."

No one is sure how many African-Americans worked as cowboys in the trail drives, but estimates run as high as 1 in 4.

"In southeast Texas, you had a large number of blacks who were slaves and had been doing cow work. When freedom comes, it would be just as natural for them to begin to do that work," Searles says, adding that there was demand for cowboys. "They gained a degree of respect and independence."

The trail drives were a unique moment in history that brought together a diverse lot of men, including freed slaves and confederate war veterans. And, while some cowboy crews were segregated, photographs of others show black and white men working side by side in what Searles calls "range equality."

"In that environment, you want to have pretty good relations," he says. "Because that person could elect to help you or not help you in a dangerous situation."

By the early 1900s, America was changing. People were moving to cities, and John Lomax decided he was in a race against time to preserve the voices of these early cowboys. Back then, it was radical to think that the creative contributions of common working people had value. Regardless, he starting sending out queries to newspapers, wrote hundreds of letters and lectured far and wide, asking people to contribute in his quest to collect cowboy songs. He occasionally visited cowboy haunts.

"In 1909, I went to the Cattlemen's Convention in Fort Worth, Texas," Lomax said in the 1940s. "One night, I found myself in the backroom of the White Elephant Saloon. I carried with me a small Edison recording machine that used wax cylinders. Instead of a microphone, I used a big horn, which the cowboys usually refused to sing into."

Don Edwards, a respected traditional cowboy singer, got his start at the same White Elephant in Fort Worth.

Edwards sings "Cotton Eye Joe," originally an African-American song from before the Civil War. Decades later, it became popular among cowboy swing musicians. Video shot by Hal Cannon in a house overlooking the Bosque River outside of Meridian, Texas, not far from the childhood home of folklorist John A. Lomax.

"You know, he had a lot of moxie to come in," Edwards says. "Bunch of cowboys and, you know, 'Sing!' Couldn't you just imagine that? They're all sittin' here drinkin' and talkin', and when he'd come in, plop that thing on the table, they'd scatter."

Edwards plays many of the songs first popularized by Lomax in his cowboy song collection. The first edition of Lomax's book contained 112 songs and a forward by Theodore Roosevelt. In his notes, Lomax credits the spirit of the ancient Anglo-Saxon ballad for informing the cowboy song. But when Edwards hears some of these songs, he says it's not ballads he's hearing.

Edwards traces this blues connection to a place where cultures mixed.

"If you go down to deep south Texas where this music was really born, on that coastal bend down there, you had white cowboys, black cowboys and Mexican vaqueros -- who were very musical people," Edwards says. "And so the white guys learned a lot of that stuff, and that's why a lot of that stuff sounded like the blues."

Don Edwards sings the cowboy classic "Streets of Laredo," which traces its roots to a centuries-old British ballad. Video shot by Hal Cannon in a house overlooking the Bosque River outside of Meridian, Texas, not far from the childhood home of folklorist John A. Lomax.

Roger Renwick, a ballad scholar from the University of Texas who has written extensively on the connection between old-world and new-world ballads, agrees.

"Especially in the case of songs which are more elliptical," Renwick says. "They don't tell a story as the European ballads tend to do. They don't tend to be as detailed -- who, what, where, when."

Renwick says that while many cowboy songs are derived from British folk songs, some take a different direction.

"Indeed, some scholars have called this a distinct African-American genre of the blues ballad, because it synthesizes the more emotional blues approach," Renwick says. "And we suddenly see some influence like that on some of the cowboy songs."

Lomax did credit some songs as coming from African-American cowboys -- notably the famous "Goodbye Old Paint" -- although he never recorded a black man playing it.

Edwards sings a bluesy variant of "Streets of Laredo" called "Tom Sherman's Barroom." Video shot by Hal Cannon in a house overlooking the Bosque River outside of Meridian, Texas, not far from the childhood home of folklorist John A. Lomax.

"When you first listen to the song," Lomax says, "the lyrics -- you think it doesn't make any sense. And then, before you know it, you're seeing this wonderful movie in your mind of visions, and you can feel it."

Franklin Willis is the great grandson of Charley Willis, a former slave who rode the Wyoming trail during the 1870s.

"He had a knack for singing. He had a gift, if you will," Franklin says. "His voice was real soothing to the cattle, and this is why they wanted him to participate in these big cattle drives, because he would sing to them and just make them relax.

Willis heard these stories passed down by his family. But there are no recordings of his great-grandfather, or even of his father, who was also a singing cowboy. Lomax's old recordings pay homage to the larger experience of those early cowboys working out in the heat and cold for a dollar a day. Out of that hard reality was born the iconic cowboy. That's why, for Augusta State University's Mike Searles, the face and music of the West need to be represented accurately.