Accessibility links
Impatient Nation: I Can't Wait For You To Read This We want everything and we want it fast. And overnight. And yesterday. Many people see impatience as a national problem. But it's as American as microwave apple pie. And it just might be a virtue. 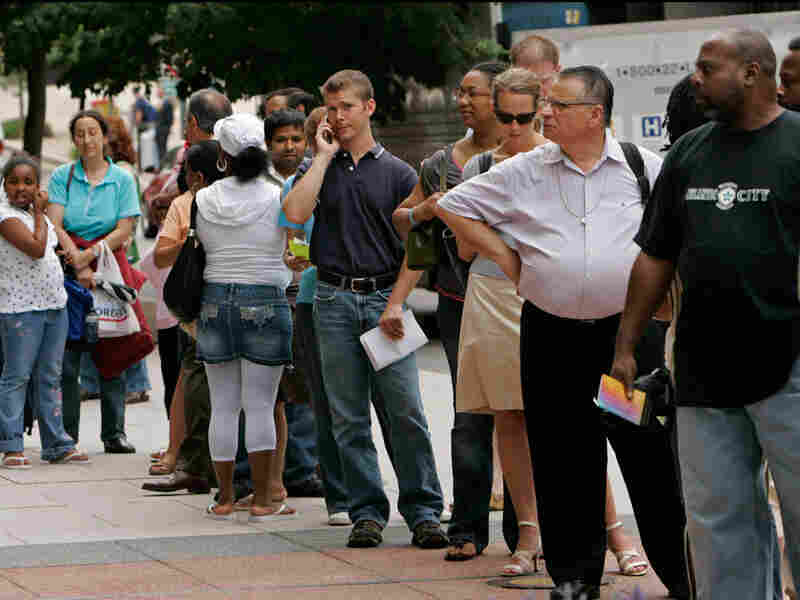 We Could Be Somewhere Else Now: People wait in line outside the U.S. passport office in downtown Washington. Pablo Martinez Monsivais/AP hide caption 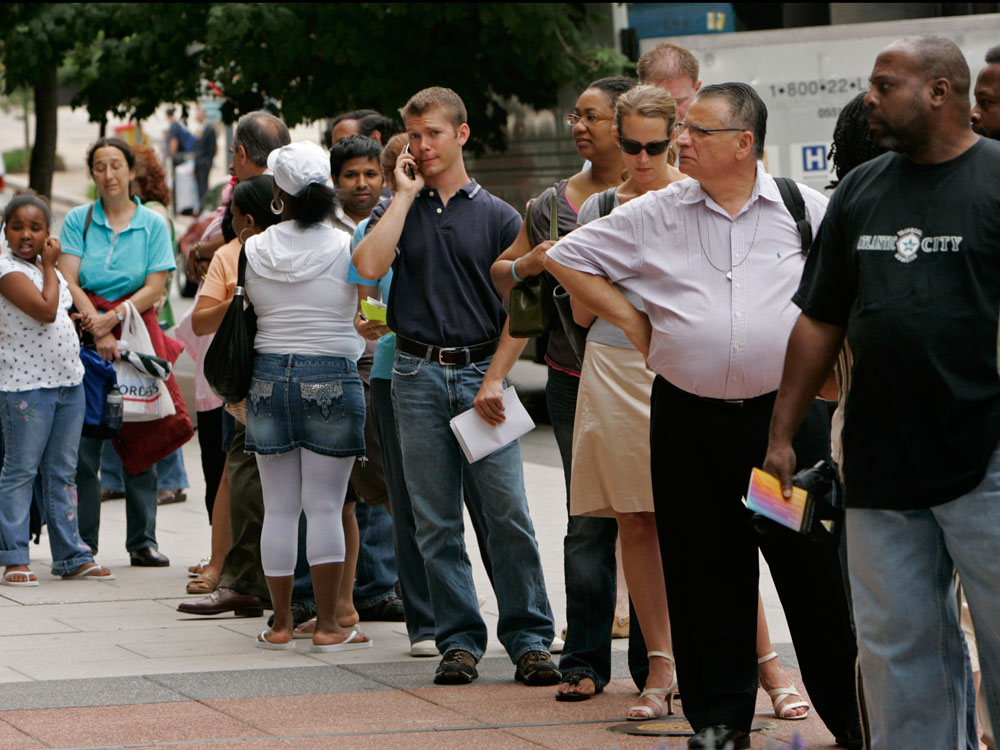 We Could Be Somewhere Else Now: People wait in line outside the U.S. passport office in downtown Washington.

You're in a hurry. You need to know what this story is about. Stat.

OK, OK. It's about impatience. And, so you don't have to wade through the whole thing, here is the last sentence of the story:

In the past few decades we have become the Impatient Nation. We want quick answers to complex problems -- the economy, diseases, personal relations.

We: Speed date. Eat fast food. Use the self-checkout lines in grocery stores. Try the "one weekend" diet. Pay extra for overnight shipping. Honk when the light turns green. Thrive or dive on quarterly earnings reports. Speak in half sentences. Start things but don't fin...

We twitter stories in 140 characters or less, yet some tweets are too long. We cut corners, take shortcuts. We txt.

We have also become impatient with ... wait for it ... impatience.

Speaking for many Americans, prolific author Valerie Frankel wrote in the March issue of Self magazine: "I've always imagined that my impatient nature is a sign of my success -- something that all busy, hard-driving, intelligent people share."

I've had it with impatient people. I've run out of patience with them.

But after melting down emotionally at a sandwich shop and a clothing store, Frankel wondered if her impatience might be "something more insidious -- a bad habit I needed to break, not only for my family but also for the sake of my own well-being."

Studies show that impatience can be harmful.

In 2003, the Journal of the American Medical Association pointed out that impatience may lead to increased risk of hypertension among young adults. "The notion that a 'Type A' behavior pattern is 'bad' for your health has been around for many years. This study helps us understand which aspects of that behavior pattern may be unhealthy," researcher Barbara Alving of the National Heart, Lung, and Blood Institute said on the MedicineNet website.

In 2004, a report in the Journal of Biosocial Science linked a rise in American impatience with an increase in obesity. Studies found that as Americans spent more of their income, and saved less, they also gained weight. "People have tried to look at a lot of reasons why Americans are getting so overweight. But nobody has thought about the idea of connecting it to impatience," John Komlos of the University of Munich told WebMD. "If you are willing to forgo present satisfaction for future benefits, you are patient," he said. "If, however, you want your satisfaction right now, then you are going to have that extra dessert and that extra ice cream and you are not going to be able to forgo the pleasures of today." 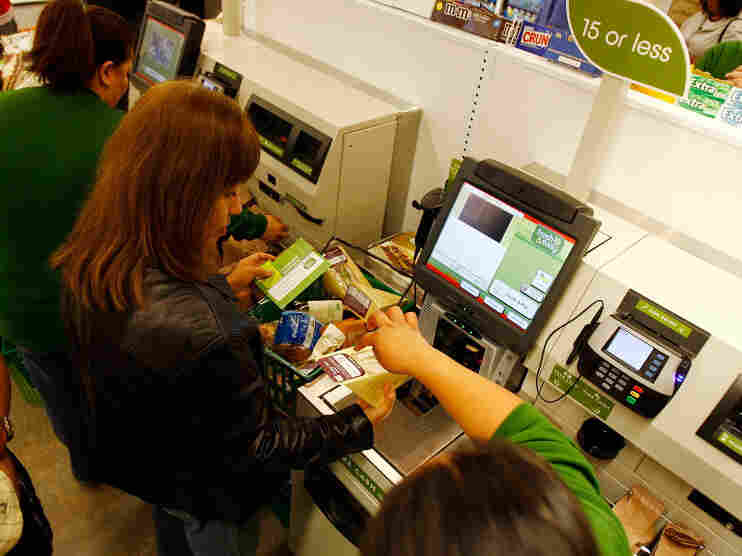 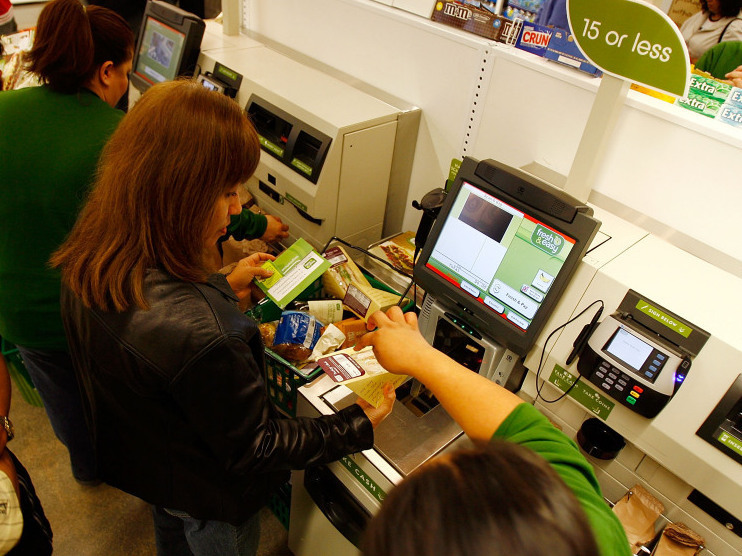 Shop And Go: Employees teach shoppers to use self-service checkout stations at a Fresh & Easy grocery store in Los Angeles.

And in 2007, Science Daily reported that, according to researchers at the University of Bonn and the Institute for the Study of Labor, impatient people may not be as savvy as patient people when it comes to money matters -- and so run a greater risk of financial insecurity.

In other words, impatience can make people tense, fat and broke. The good news, according to Frankel, is that impatience is a behavior, not a personality characteristic. It is an outgrowth of "living in a chaotic world," she observed. And so she set out to mend her fretful ways.

Eight months after her essay was published, she reports: "Do I still feel impatient? Of course! I still drive in traffic, wait on line and go to the movies. But I have been better about not letting impatient-related rage take over. I no longer fantasize about a slow cashier's head bursting into flame."

It helps, she says, "to remember that long lines and bad service are part of ordinary, imperfect life. I'm not special, and therefore, not exempt from daily irritation. Everyone has to deal with it. Except for, say, Madonna."

Some people blame our national impatience on technology. E.J. Montini, columnist for the Arizona Republic, writes, "Technology has made us impatient. We no longer enjoy pausing. Or remembering. We log on, tune in, dial up and speed off like drag racers, leaving in our wake a swirling cloud of historical dust, memory, perspective and people."

But technology only does what we want it to do. And we want it to do whatever it does faster. Here's a quick thought experiment: Name one technological task you wish could be performed slower. We want computers on NOW. Files downloaded NOW. Phones displaying info NOW.

Others blame our restiveness on overcrowding. Or capitalism. Or consumerism. Or the lickety-split speed of daily life. But impatience is not just about acceleration. It's about agitation. Ants in the pants. Edginess, rashness, impetuousness.

We: Send new faces to Washington every two years, then vote the rascals out two years later. Clamor for more safety in the skies, then complain when security takes too long -- and is inconvenient. Can't take the time to drive to the video store or to wait for a DVD to arrive in the mail, so we order them on demand or stream them on the Web -- well, clips of movies at least.

"We are an impatient people ... living in a time of great uncertainty," Tim Kaine said in 2009.

"We Americans are an impatient people," Bill O'Reilly said recently in a segment about voter anger.

And many people see impatience as an American disease that needs to be cured. "Are impatient people as serious a problem as the earthquake in Haiti, the BP oil spill, the Chilean mine collapse, or the recent deadly flooding in Pakistan?" noted Christine Egan on the female-oriented website Blisstree. "Of course not. But these tragic, real-life events are precisely why perennially impatient people need to get a serious grip on their luxury, first-world problems."

Egan wrote, "I've had it with impatient people. I've run out of patience with them."

Impatience As A Virtue

Sure, it can be the sign of a troubled mind: The Centers for Disease Control and Prevention puts impatience at the top of the list of symptoms in diagnosing someone with traumatic brain injuries.

But impatience can also be the sign of a healthy mind: Wired magazine lists impatience as a desirable characteristic in the "X-factor" that leads to success.

And here is President Obama on the subject. "The people are frustrated, they're anxious, they're scared about the future," he said in September. "And they have a right to be impatient about the pace of change. I'm impatient."

Impatience can be a virtue. The country's Founding Fathers were an impatient lot. In an 1822 letter, John Adams described the writing of the Declaration of Independence: "We were all in haste," he said of the drafting committee, which included Thomas Jefferson and Benjamin Franklin. "Congress was impatient."

Other society-altering Americans -- including abolitionists, suffragists and civil rights leaders -- were impatient for change.

The fact is: "Everybody would be impatient if delayed and frustrated long enough," says C. David Jenkins, a retired University of North Carolina social epidemiology professor who has studied Type A behavior. "It's only when people have an excessively short fuse and get impatient quickly that someone's impatience becomes a problem for others."

Poorly thought out impatience can cause grief rather than relieve it.