Accessibility links
Rolfing Back In Vogue, But With Shaky Evidence A deep massage technique, called Rolfing Structural Integration, was last popular in the 1970s. Now, it's hip with the yoga-Pilates-acupuncture crowd. But scientists say the research supporting its effectiveness is limited.

Listen
Rolfing Back In Vogue, But With Shaky Evidence 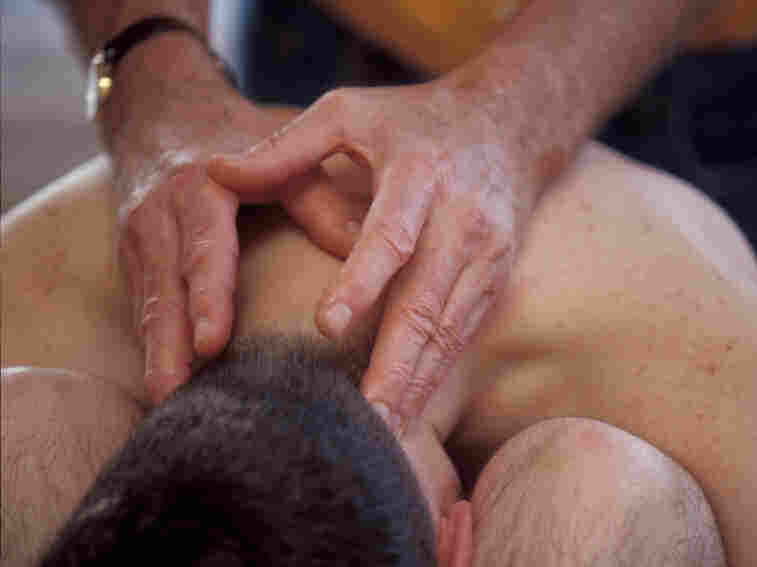 Rolfing was named after its founder, an American biochemist named Ida Rolf. Her own health problems led her to believe that deep tension could be relieved by pressing into fascia tissue. James Gritz/iStockphoto.com hide caption

As I open the door to a somewhat antiseptic-looking medical office in downtown San Francisco, I'm quite certain I will not be getting a lavender-candles-and-wind-chimes kind of a massage -- the kind that will leave me facedown in my own drool. I expect this to be painful. That's what I've been told anyway.

Greg Brynelson, a certified Rolfer and registered nurse with a loyal following, tells me to lie on my back. Rolfing Structural Integration is a type of deep -- really deep -- massage that was last popular when Nixon was president. Well, Rolfing has become a favorite again -- this time among the yoga-Pilates-acupuncture crowd.

"Through here, it feels like I'm coming up against a wall," he says. "There's not a lot of give."

Brynelson has kind eyes and strong hands. Or thumbs. I think that's what's pressing into my neck.

Rolfing was named after its founder, an American biochemist named Ida Rolf. Her own health problems led her to believe that deep tension -- even mild physical deformities in children, like pigeon toes -- could be relieved by pressing into a type of tissue called fascia. Fascia fuses skin to muscle and muscle to bone, and it kind of keeps everything in place, like a snug pair of pantyhose. 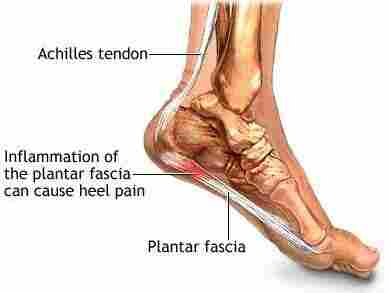 Slouching over a computer and schlepping around kids can tighten and shorten your muscles, and with them, the fascia cinches down, like one of those vacuum-sealed beef jerky bags. Rolfers, like Brynelson, believe stretching out the fascia -- getting it to be more soft and pliable -- can improve posture and strength, and over time, reduce aches and pain.

Since I had just had my fascia flattened, I wanted to see what it looks like. So I head to the cadaver lab in the basement of Stanford University.

Sakti Srivastava, a physician at Stanford's division of clinical anatomy, and I are looking at the fascia on a partially dissected human leg.

It almost looks like the thin layer of white film you have after you debone a chicken and pull the skin off of it. If this person had bad posture or a chronic injury, Rolfers say the fascia would tighten, throwing off the person's gait and possibly leading to lower back pain or other aches.

It's a theory that is largely taken on faith, many researchers say. Wolf Mehling is a manual medicine physician at the University of California, San Francisco who treats patients with Rolfing as well as other kinds of massage. Still, he says, it's hard to say if Rolfing can lead to long-term structural changes in the body.

Rolfing isn't just for achy adults: babies, the elderly and even horses can all receive it. But to be a real Rolfer, practitioners must be trained and certified by the Rolf Institute of Structural Integration.

Rolfers "come from all walks of life," says Susan Winter, a spokeswoman for the institute. Some are massage therapists or nurses, while others are totally new to bodywork.

The certification program takes a year to 18 months to complete. Students learn about anatomy and ethics, and they receive instruction in the institute's special brand of therapeutic touch.

The institute offers three types of certification: At the basic level, students become Certified Rolfers. Then there are Certified Advanced Rolfers, who have at least three years of experience and completed the 24-day Advanced Rolfing Training course. Rolf Movement Practitioners complete an additional two-phase course that lasts 18 days.

To find a Rolfer who has received the official training, visit the institute's website.

"To my knowledge, there has been no randomized, controlled trials comparing Rolfing with other types of massage or bodywork," he says.

According to Mehling and other researchers, the few studies that have been done are too limited or flawed to draw any conclusions about Rolfing's effectiveness. Rob Landel, head of physical therapy at the University of Southern California, says the philosophy of Rolfing makes sense -- if you can loosen up and improve your posture, your overall body movement improves, too.

Indeed, physical therapists are trained to work on soft tissue, like fascia. It's just that they work on other things, too -- joints and muscles and ligaments. And that, says Landel, is why Rolfing probably couldn't stand up in a clinical trial.

"I doubt if it will end up being, 'Oh this is The Thing,' because our musculoskeletal problems end up being multifactorial," he says. "So, it's doubtful that any single approach is going to fix everybody."

More likely, Landel says, is that Rolfing could be shown to work for certain problems like low back pain, when combined with strengthening exercises and better posture.

Back To The Back

Which brings us back to my back. After pressing deeply into my right shoulder and neck, my Rolfer Greg Brynelson asks me to stand up and look in the mirror.

"Do you see how the left side is still grabbing?" Brynelson asks. "There's just more softness through here. Do you feel a little more movement?"

And it's true: One shoulder has an easy, graceful slope. The other is hunched up, like it often is. As I put my shoes back on -- a pair of very unorthotic heels -- and sling my oversized, overloaded purse onto my shoulder, Brynelson looks at me with pity and resignation. Me and my fascia, it seems -- we're a work in progress.