Accessibility links
Medical Scans, Without The Weapons-Grade Uranium A new technique for manufacturing a radioactive material used in medical imaging may create a more reliable supply of it. Nuclear proliferation experts say it could also help prevent uranium from falling into the hands of terrorists. 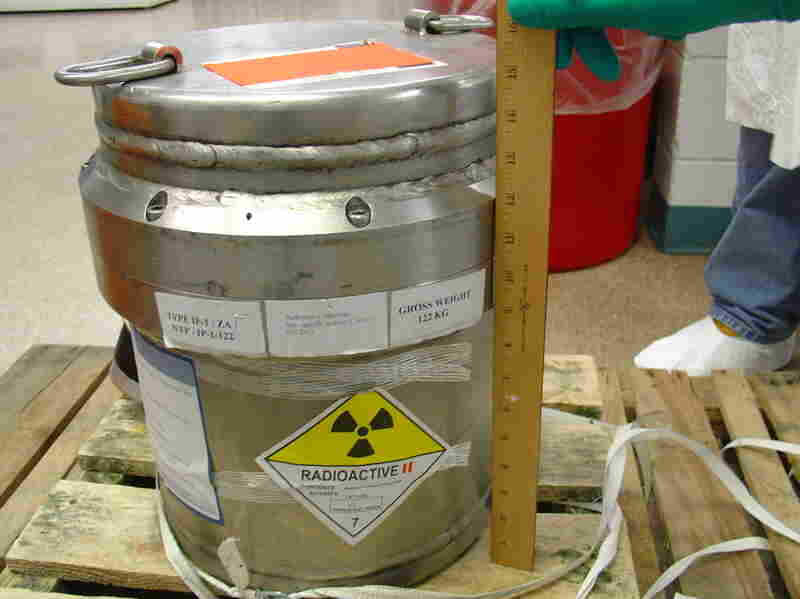 Heavy shipping containers like this one are used to transport molybdenum-99, a radioactive material used in diagnostic medical imaging. Courtesy of Lantheus Medical Imaging hide caption 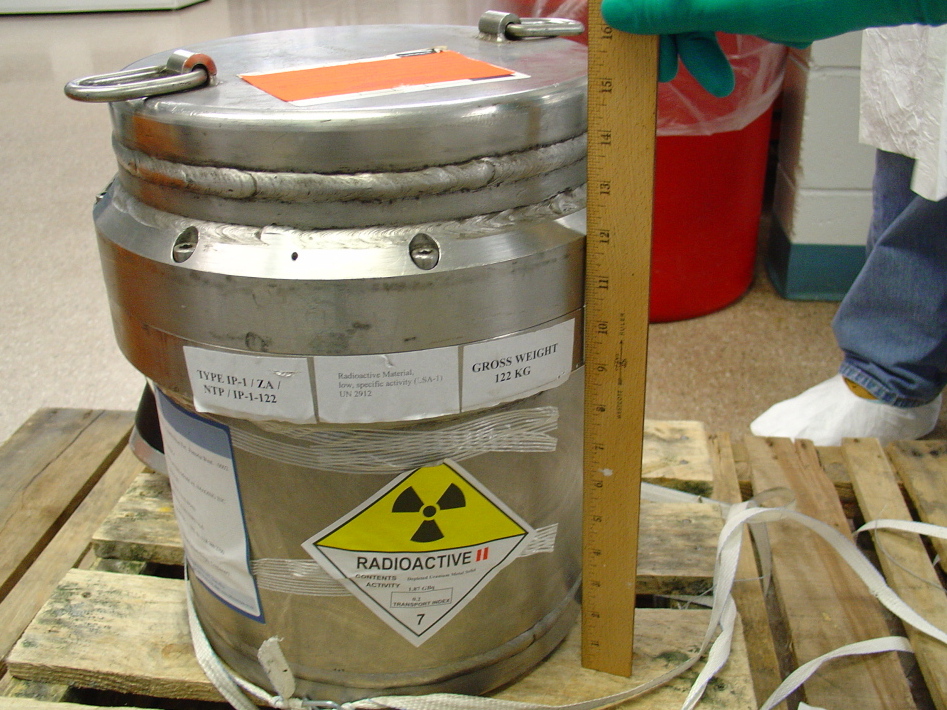 Heavy shipping containers like this one are used to transport molybdenum-99, a radioactive material used in diagnostic medical imaging.

The U.S. has just received its first shipment of molybdenum-99, an essential material for medical imaging that's being mass-produced for the first time with low-enriched uranium instead of weapons-grade material. The molybdenum-99 was shipped from South Africa to Lantheus Medical Imaging, in Billerica, Mass., for final processing before it can be used by patients.

The latest technique for manufacturing the radioactive material promises a more reliable supply, while also allaying fears of nuclear proliferation.

Molybdenum-99 is used to make the radioactive tracer technitium-99m, which is commonly used in noninvasive diagnostic scans. Doctors in the U.S. use the procedure 50,000 times a day to see, for example, if a heart is pumping well or if a cancer has metastasized.

Until now, molybdenum-99 has been manufactured only from highly enriched uranium, which has made many people uneasy. It's no small irony that the very same stuff that doctors use to save millions of lives every year is exactly the stuff terrorists would use for the opposite effect -- if they could steal it from one of the foreign plants involved in the first stages of production.

"It's a sitting duck for al-Qaida because these facilities are not guarded like military facilities, but they have bomb-grade uranium," says Alan Kuperman, an expert in nuclear proliferation at the University of Texas. He says the highly enriched uranium used to make molybdenum-99 is a nuclear terrorist's dream.

"I'm talking about the identical material that's used in the U.S. to make nuclear weapons," he says. "In fact, it has higher enrichment even than the Hiroshima atom bomb."

And that's only part of the problem: There's no molybdenum-99 made in the U.S. Most of the supply comes from two old, somewhat cranky, reactors in Canada and the Netherlands. So when they both happened to shut down at the same time last summer, for example, doctors and their patients were left in the lurch.

"The situation was very bad. Very bad," says Marcello Di Carli, chief of nuclear medicine at Brigham and Women's Hospital in Boston. "We were pretty much going day by day, 'How are we going to do the tests tomorrow?' "

Molybdenum-99 can't be stockpiled because it has a short half-life, meaning it decays rapidly, becoming unsuitable for imaging. During shortages, hospitals like Brigham and Women's fare better than most, since they can substitute even more expensive high-tech tests like a PET scan. But in many cases, medical tests end up canceled or delayed. Sometimes doctors resort to invasive surgery to see what's going on inside a patient. And often, patients have to settle for a less accurate test.

"Obviously the [patients'] question is: 'Is that second test as good as the first test?' " says Di Carli. That sometimes puts the physician in an uncomfortable position, he says, because the tests are not always equivalent. "That is why we are doing the other test."

In recent years, molybdenum-99 shortages have also been caused by everything from striking workers to the volcanic eruption in Iceland, which grounded planes in Europe and blocked delivery.

But federal officials hope those supply issues and their worries about nuclear proliferation will soon become a thing of the past, now that NTP Radioisotopes Ltd., a subsidiary of the Nuclear Energy Corporation of South Africa, in a joint effort with the U.S. government, has figured out how to mass-produce molybdenum-99 using low-enriched uranium.

"It was a tremendous eureka moment," says Parrish Staples, with the U.S. National Nuclear Security Administration, which helped finance the research. He says the breakthrough will now hasten domestic production of molybdenum-99 from low-enriched uranium, and could soon end the risk of nuclear proliferation from the medical isotope industry.

"I would say by three to seven years, we should be extremely optimistic that international producers will get away from the use of highly enriched uranium for medical isotope production," Staples says.

Others, however, say that's too optimistic. Kuperman, the nuclear proliferation expert, says producers will drag their feet to avoid the cost and effort of conversion unless the U.S. forces them to act, by leveraging its position as buyer of half of all the molybdenum-99 in the world. Kuperman says the U.S. should aggressively tax or ban the import of all isotopes made with bomb-grade uranium.

But some in the industry disagree.

"Everything I've seen is that the corporate will is there," says Steve Littlejohn, a spokesman for Covidien, one of the major molybdenum-99 processors. He says the industry does understand that making isotopes without bomb-grade uranium is the future. "To the extent it doesn't happen overnight, it's because we are working to make the science work, rather than some kind of foot-dragging."

In fact, Littlejohn says, Covidien is already invested in one of several domestic production ventures now under way. The federal government is offering some startup money to help, and doctors are keeping their fingers crossed. As one said: "We talk about reducing the U.S. dependence on foreign oil -- relying on foreigners for this is just crazy."