Accessibility links
In Calif., Prop. 8 Debate Tests Limits Of Tolerance During the twists and turns of Proposition 8, motions and tempers have run high on both sides. There has been a lot of posturing and name-calling, both subtle and the in-your-face variety. What there hasn't been is much rational discussion between the parties. 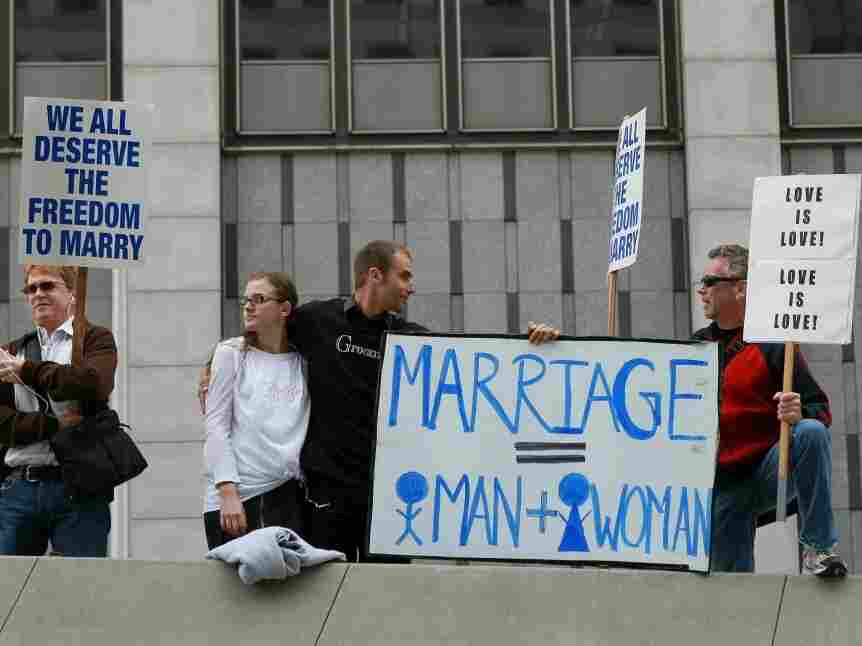 Supporters of Proposition 8, the California measure that restricts legal marriage to heterosexual couples, stand between opponents of the measure in San Francisco in August. The 9th Circuit Court of Appeals begins deliberations Monday on the legality of same-sex marriage in the state. Justin Sullivan/Getty Images hide caption

If you're getting a little dizzy watching the issue of same-sex marriage ping-pong through the California courts, you're not alone. The 9th Circuit Court of Appeals is the latest court to consider the legality of same-sex marriage in the state. Here's a quick catch-up:

The Fight For (And Against) Marriage Equality

In 2000, William J. "Pete" Knight, a state senator and former astronaut, introduced Proposition 22 -- often referred to as the Knight initiative -- which changed the wording of the Family Code of the California Constitution to read: "Only marriage between a man and a woman is valid or recognized in California."

Voters passed it by 61 percent. (Knight's son David came out during this time; Knight died of leukemia four years after the legislation passed, without having reconciled with his son.)

The legality of the Knight initiative was challenged through several courts, finally reaching the state's Supreme Court in 2008. In May, judges there declared that denying legal marriage to same-sex couples was discriminatory, and therefore unconstitutional. That led to about 18,000 marriages from June, when they were allowed to commence, until Election Day that same year, when the marriages were halted.

That's because Californians voted for Proposition 8, a constitutional amendment that would, once again, restrict legal marriage to heterosexual couples. Proposition 8 opponents, shocked that the measure passed, vowed to regroup and appeal to a higher authority. Enter U.S. District Judge Vaughn Walker, who after lengthy deliberation, declared Proposition 8 invalid and prepared to allow marriages of same-sex couples to resume. The 9th Circuit has put a hold on that until it makes its own decision in a case that begins Monday.

Which is why the issue of same-sex marriage is again in the news.

A History Of Intolerance -- On Both Sides

During the twists and turns of Proposition 8, motions and tempers have run high on both sides. There has been a lot of posturing and name-calling, both subtle ("confused," "inflexible") and the in-your-face variety ("deviant," "bigot"). What there hasn't been is much rational discussion between the parties. In large part, the tone and tenor of the debate has prevented that.

Pastor Brad Bailey of the Vineyard Christian Fellowship, a vibrant congregation in busy West Los Angeles, says talking about Proposition 8 with people who believe differently than he does can be hard, but it's necessary to reach out.

"My desire is just to try to help lower the contempt and raise the conversation" on both sides," he says.

Bailey says same-sex marriage isn't "a banner issue" for his church -- his members feel it will become legal eventually, probably sooner rather than later. (Polls on the subject say they are right -- as the state trends younger, the issue of marriage equality becomes a nonissue.) Thoughtful and soft-spoken, Bailey says he understands why same-sex couples argue that marriage for everyone, regardless of gender, would be a good thing.

"I think that's one of the strong positions made for opposing Prop. 8," he acknowledges: "The sense that it brings more stability to relationships, and therefore more stability to culture and families and children."

He also understands why some in the lesbian, gay, bisexual and transgender community don't want the option of civil unions, but are holding out for the same kind of marriage their parents and straight friends are entitled to.

"The feeling of being second class, of not having your own love validated for a partner; the desire to be able to experience as much of a life and family -- those things are very legitimate desires," he says.

But he does worry that in an "I'm OK, You're OK" society, the urge to put everyone on an equal marital footing will result in the disintegration of something he feels is critically important.

"As we consider same-sex marriage, it obviously affects something," he says.  "It has the implication that the role of father and mother are not unique, and that's something to raise, to consider."

Dudley Rutherford also says he is pretty sure same-sex marriage will eventually become legal in California, if not this time around "then in three to five years."

"As a pastor, the day will come when it will be against the law of this land for me to preach the word of God," Rutherford sighs.

Rutherford is senior pastor of Shepherd of the Hills, a sprawling megachurch in the affluent Los Angeles suburb of Porter Ranch. The Shepherd, as its 10,000 congregants fondly refer to it, has four campuses and myriad outreach ministries. Rutherford has been active in defense of Proposition 8 because he believes God designed the template for marriage.

"I believe that civilization, for 5,000 years, that has been the norm," he says.

It's not designed to exclude others who have loving relationships, he says.

"It's a matter of the rest of us trying to live according to his word, and what his plan is for our life," he asserts.

Rutherford, an amiable man who counted beloved UCLA basketball coach John Wooden as a parishioner and personal friend, is irked that his support for traditional marriage has, for some, reduced him to a stereotype of a bigot.

"We're accused of not being civil or being bigoted, and I see just the opposite with some of the hate mail and the loudness of the protest for anyone who stands up for Prop. 8," he says.

Bailey concurs, and says that part of the problem -- with Prop. 8 and other contentious social issues -- is that the concept of tolerance seems to have become synonymous with agreeing with the person with whom you're having differences.

"I think as a culture we're kind of at, 'Let's pat everyone on the back and tell everybody it's OK, and we can all feel better' in the name of tolerance," he says. "I just think we're missing, on a whole level, what tolerance is about."

Bailey says he expects the pressure for agreement to intensify when same-sex unions eventually are legalized.

"I know when my kids are in school, they're being taught they will have to accept that all sexual orientations and desires are equally healthy expressions of sexuality and of the good of humanity," he says. "And if they disagree with that, they're told they're being intolerant -- but actually that's exactly confusing what real tolerance is."

The limits of tolerance -- by any definition -- will probably continue to be tested this week as the three-judge panel on the 9th Circuit contemplates the legitimacy of Proposition 8.