Accessibility links
Democrats Push DREAM Act; Critics Call It Amnesty Under the DREAM Act, illegal immigrants brought to the United States as children would qualify for legal residency if they complete two years of college or military service. Congress is expected to take up legislation this week, but the bill faces long odds in the Senate. 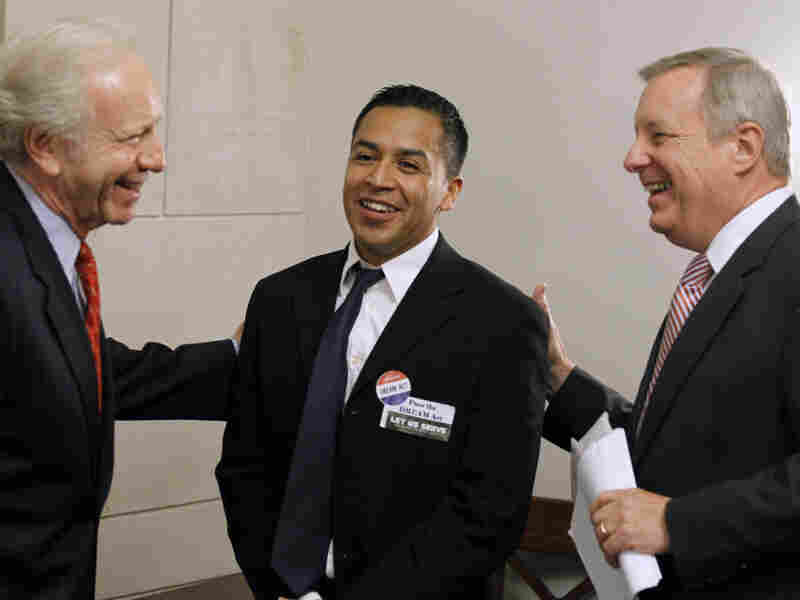 Sens. Joseph Lieberman of Connecticut (left) and Richard Durbin of Illinois (right) talk with Cesar Vargas, a law student from New York City, on Capitol Hill in September. Vargas is one of some 2 million young people who would qualify for legal residency under the DREAM Act. Alex Brandon/AP hide caption

Congress is expected to take up legislation this week that would give some people who are in the country illegally a path to citizenship. The DREAM Act is aimed at illegal immigrants brought here as children by their parents.

They would qualify for legal residency if they complete two years of college or two years of military service. But critics say it's still amnesty, and the bill faces long odds in the Senate.

Cesar Vargas, a third-year law student in New York, is one of some 2 million young people who would qualify for legal residency under the DREAM Act. He was brought to the U.S. from Mexico by his parents at age 5.

Vargas graduated from high school with honors and wants to join the armed forces -- to give back, he says, to his country, the United States.

"I also plan to join the military and join the Marine Corps, either as a JAG officer in the Judge Advocate Corps or [as an] intelligence officer, so it's definitely giving back to my country. That's my core value, and that's what ... the DREAM Act will do," Vargas says.

'The Best And The Brightest'

To qualify, young people would have to have entered the country by age 16, pass a background check, graduate from high school, and attend college for two years or join the armed forces.

"These are the best and the brightest of the Latino immigrant community and other ethnic communities," says Frank Sharry, director of America's Voice, which favors the bill. "All they want to do is to live the American dream, so that they can contribute to a nation that they call home."

The measure has the support of Democratic congressional leaders, as well as the Obama administration. In a conference call with reporters last week, Homeland Security Secretary Janet Napolitano said her agency should spend its resources tracking down "criminal aliens" -- threats to public safety and national security.

"What doesn't make as much sense is the idea of spending our enforcement resources to prosecute young people who have no criminal records, who were brought here through no fault of their own, so they have no individual culpability, and who now want to go to college or serve in our armed forces," she said.

A Priority For Democrats

Supporters of the DREAM Act are well-organized. They have been staging protests in congressional offices, holding candlelight vigils and running campaign-style ads.

One airing in Massachusetts targets Republican Sen. Scott Brown. "The military, small businesses and 66 percent of voters support the DREAM Act," it says. "Sen. Brown, where do you stand?"

But Brown is unconvinced. He's released a statement calling the DREAM Act a form of amnesty.

The measure is a political priority for Democrats. Senate Majority Leader Harry Reid promised to bring the DREAM Act up for a vote during his successful re-election campaign -- in which support from Latinos played a key role.

"This is a last-ditch kind of political stunt," says Roy Beck, the director of NumbersUSA, which opposes the bill. "[House Speaker Nancy] Pelosi and Reid have made some promises to some groups; they've got everything all stirred up. They're going to cause an incredible amount of disappointment among a lot of students around the country on something that ... never had a chance."

Opponents say the DREAM Act is likely to cost some $6 billion a year -- a charge backers say doesn't add up -- and that it will mean fewer jobs for U.S.-born workers.

"American people did not vote for an amnesty in this past election," says Republican Sen. Jeff Sessions of Alabama. "And it will be resisted with every strength and every ability that I have to do so. Because this is a lame-duck Congress, it will not pass next year, and it's not going to pass this year if I have anything to do about it."

And Sessions may well have his way. It appears unlikely the DREAM Act has enough votes in the Senate to win approval in the remaining days of this Congress.