Accessibility links
Hackathon: 2 Days, 1,000 Developers, Lots Of Caffeine This past weekend, software engineers met in 21 locations around the world to take part in a humanitarian effort called Random Hacks of Kindness. In 30 hours, teams of software developers competed by trying to solve problems that arise during humanitarian crises. 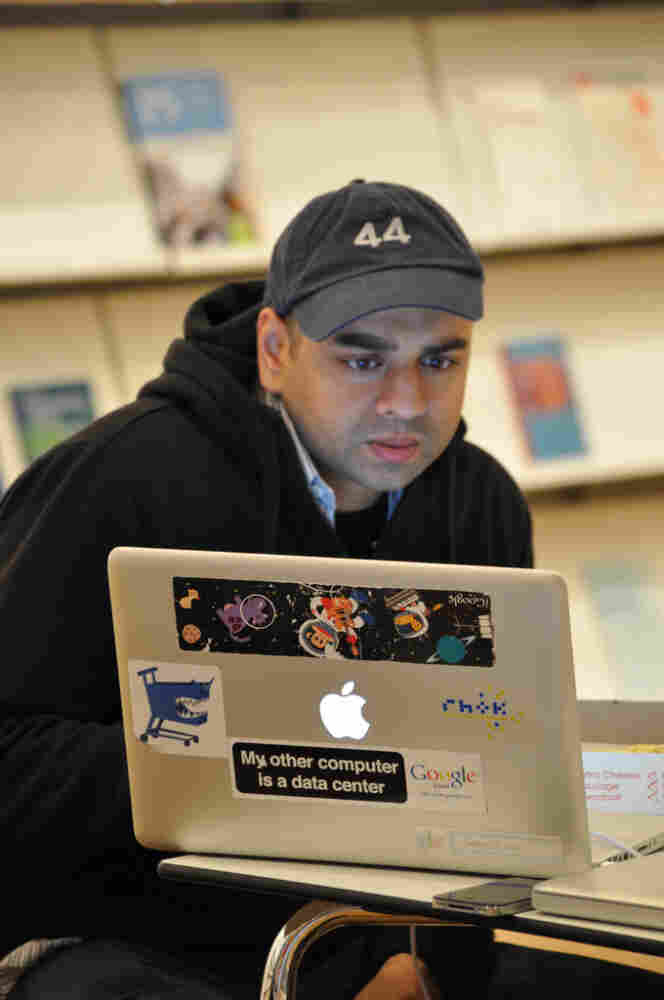 When a crisis like a flood or a devastating earthquake hits, aid groups are often working in the dark. They need reliable data maps: Where are the people? What are the problems?

Farmer was among more than 1,000 software engineers and other tech workers who met in 21 locations around the world this past weekend to take part in a humanitarian effort called Random Hacks of Kindness.

The two-day competition gives software developers a chance to "hack" or ply their skills to solve problems that arise during humanitarian crises.

Usually, hacking is considered criminal -- but it actually means tinkering. Participants come together to use their skills to do good.

One of the biggest gatherings was in New York City, where a number of Microsoft, Google and Yahoo employees mingled with each other as well as global leaders.

United Nations Secretary-General Ban Ki-moon admitted being a little out of his element. "Unlike some of our colleagues here today from NASA, I'm not a rocket scientist," he said. "I may be the last person to talk about high-tech, what's going on now."

But the U.N. presence underscores how interested large humanitarian organizations are in getting help from the tech community.

A lot of us involved in the Haiti and the Chile and the Pakistan responses — we looked at what we were doing. We discovered the skills that we had made a massive difference to people, literally saved lives. It doesn’t get much better than that.

At Random Hacks of Kindness, developers use open source technology that's public and collaborative. That means engineers for Google and Microsoft, at least in this setting, can work side by side.

Patrick Svenburg, a director for Microsoft and a co-founder of Random Hacks of Kindness, says it was a little risky at first.

"We threw all cautions to the wind, and we got a little group of people together in November of 2009 at the first hackathon in Silicon Valley," he says. "About 100 people showed up. I didn't get fired; nobody got fired. It was a nice experiment."

And in just two subsequent events, participation has exploded.

"A lot of us involved in the Haiti and the Chile and the Pakistan responses -- we looked at what we were doing," Farmer says. "We discovered the skills that we had made a massive difference to people, literally saved lives. It doesn't get much better than that."

In a college auditorium in Manhattan, hackers with projects made pitches to try to get help from others for the next two days. They formed teams. White boards, laptops and lots of caffeine appeared for the next 30-plus hours of hacking.

More About The New York Random Hacks Of Kindness Event

They were all hoping to accomplish something like what developer Andy Gup did last year. He created software that picked up messages from Twitter to pinpoint crisis hot spots. It was immediately used in Haiti and continues to be used by dozens of agencies.

"In the dark ages, two to five years ago, it would've taken a long time to deploy these applications," Gup says. "Now we're seeing applications that are helping these people immediately."

The event awarded prizes like smart phones and flip cams for the top hacks. Winners also got praise from their peers and some free beer. The real reward, they know, will come later.