Accessibility links
Destructive Bug Infests Hawaii's Kona Coffee Fields The insect, known as the coffee berry borer, has the potential to reduce crop yields by up to 90 percent. Agriculture specialists have called for mandatory treatment of all beans leaving Kona for other islands. 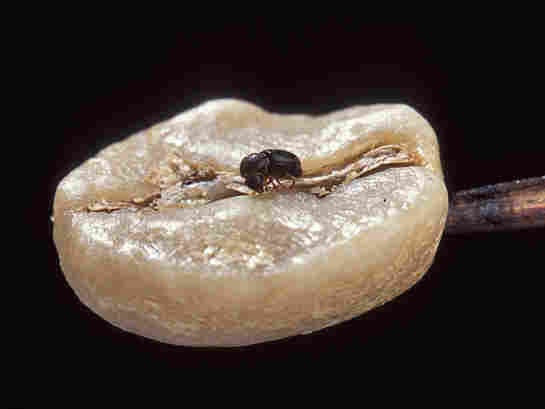 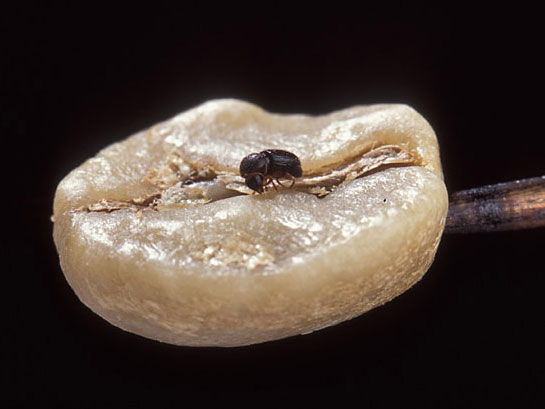 The Kona coast of the Big Island in Hawaii is to coffee what Napa Valley in California is to wine. The elevation combined with a moderate tropical climate and volcanic rock helps produce some of the priciest coffee beans in the world.

But now the premium coffee, which can go for as much as $50 a pound, might get even more expensive: A destructive bug known as the coffee berry borer has infested Hawaii's Kona coffee bean farms.

Neil Reimer with the Hawaii Department of Agriculture says this bug has not been eradicated anywhere in the world. He says the insect can only be controlled. And Reimer says the infestation could affect Hawaii's farmers more than others.

"If you're in a Third World country, or somewhere in South America or Central America, you can probably get by because labor is really cheap and land is cheap," Reimer says. "Where in Hawaii, you just get a small percentage reduction in yield [and] it can knock you under. So it's even more serious, I think, in Hawaii."

Adult female coffee berry borers bore a hole in coffee berries and lay their eggs near the two coffee beans found inside the berry. Once the eggs hatch, the larvae feed on the beans, rendering them unsuitable for commerce or greatly lowering their quality.

Reimer says it’s hard to know for sure what the impact of the bug will be on Kona coffee. But he says, based on experience in Latin America and Africa, the insect has the potential to reduce crop yields by up to 90-percent.

Reimer says the U.S. Department of Agriculture is still investigating how the bug got to the Kona coast. But in the meantime, Reimer says farmers must adapt.

Jason Stith, a Kona coffee grower, learned how to grow coffee in Latin America while in the Peace Corps. The sloping acres of his peaceful farm in Kona are filled with some valuable trees.

"We were finalists a couple times in the cupping contests, so we can demand a good price for our coffee," Stith says. "And we sell it all."

But Stith says he hasn't been growing as much recently. First, he and other farmers were hit with a damaging two-year drought. Then, Stith discovered something that he says made him sick to his stomach: a tiny hole at the end of a bean, where an insect had bored in.

"And now there's nothing in there," says Stith. "It's just [an] old rotten bean."

Stith sent samples to the University of Hawaii for testing, and scientists there confirmed the worst fear of farmers and agriculture officials. The hole was created by a coffee berry borer. Stith says one-fifth of his crop is infested. 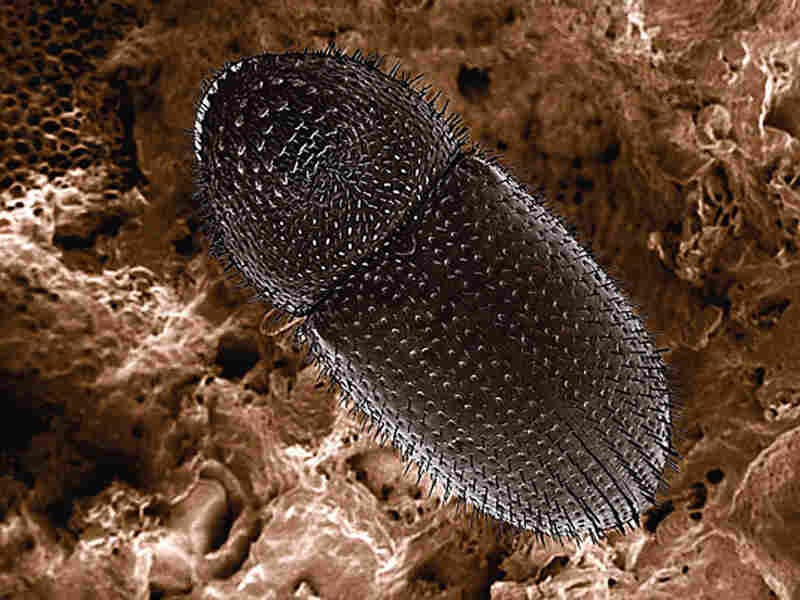 A coffee berry borer seen through a scanning electron microscope. On the Hawaiian island of Kona, officials are devising strategies to eliminate the pest. Chris Pooley/USDA hide caption 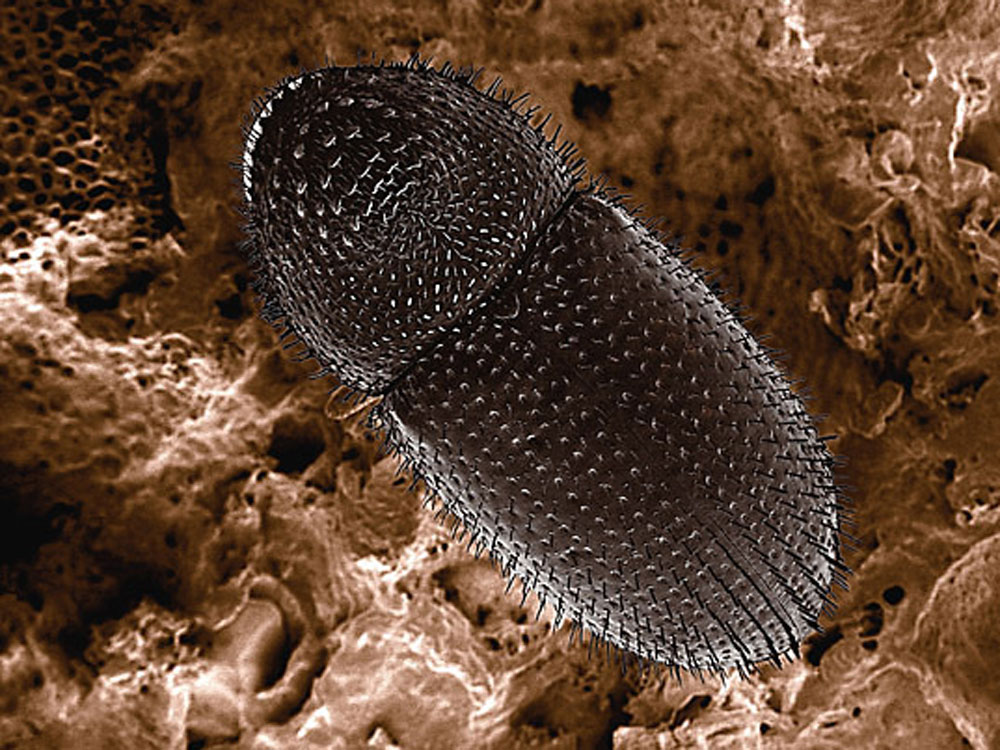 A coffee berry borer seen through a scanning electron microscope. On the Hawaiian island of Kona, officials are devising strategies to eliminate the pest.

Agriculture officials in Hawaii immediately called for mandatory treatment of all beans leaving Kona for other islands.

Michael Conway, an agriculture manager for Dole Food Co., which farms 150 acres of coffee on the island of Oahu, spoke at a recent hearing in favor of mandatory treatments to protect the state's other farms.

"This is the first time in my entire agriculture career that I've seen this type of problem come up where an insect is contained to one area that has this potential to devastate an entire industry," says Conway. "And we really have to act accordingly."

Skip Bittenbender, an agriculture specialist at the University of Hawaii, says the treatment mandate will give him time to devise other strategies to beat the pest.

In the meantime, he says growers will have to keep their fields clean and pick up any leftover beans. He says they'll have to set traps and spray insecticides -- some of which are still under development.

Together the coffee berry borer and drought have decimated this season's coffee crop for hundreds of independent farms that dot the Kona coast. And fewer beans harvested means a higher price for a cup of Kona coffee.