Accessibility links
Youth Radio Investigation: Arresting Youth In Sex Trafficking Raises Debate In Oakland, Calif., known as a center for sex trafficking in children, police used to put a priority on arresting johns. But with cuts in funding the police now target the children who've been trafficked for sex. Prosecutors say arresting the victims is actually a way to save them. Some children's advocates disagree.

Oakland, Calif., is known as a center for sex trafficking, with a specialty in children. In 2003, the FBI dubbed the city, part of the San Francisco Bay Area, a "high-intensity child-prostitution area." Police say Oakland youth are often trafficked from their hometown out to other sex hubs like Portland, Ore.; Los Angeles, Las Vegas and Atlanta.

Youth Radio is an independent producer. For more than six months, the organization has been investigating child sex trafficking in Oakland, Calif. In this two-part report, it pieces together what life is like for girls who are forced into prostitution — and how law enforcement continues to criminalize girls the state legally defines as sexually exploited victims.

Law enforcement officials and youth advocates say they're frustrated by California law, which makes it difficult to prosecute pimps and johns and easy to go after the children. Monday, in the first of a two-part Youth Radio report, two survivors of sex trafficking shared their stories. Today, Youth Radio explores what Oakland police and the FBI are doing to combat sex trafficking.

At Oakland police headquarters on a recent afternoon, Lt. Kevin Wiley is briefing a group of FBI agents and police officers who are about to go out on a sweep.

"Remember, priority No. 1 is safety, right? Undercover officers, make sure you're aware of your 360 the entire time. No surprises out there, please."

Until four years ago, Wiley's Vice and Child Exploitation Unit prioritized arresting johns. But those operations and the funding that made them possible have been cut. Instead, the Oakland Police Department now targets the children who've been trafficked, in an effort to get them off the streets — and to get them to give up the names of their pimps.

"We're out there looking for pimps, anyone involved in human trafficking," Wiley says. "If we can pick up some of the girls, that's great. We're targeting children, but we do want to get the big fish, that is, the pimps out there."

'It's Busy Around Here'

Undercover cops in beat-up used cars drive out to East Oakland's International Boulevard, the center of Oakland's red-light district, known as "The Track." 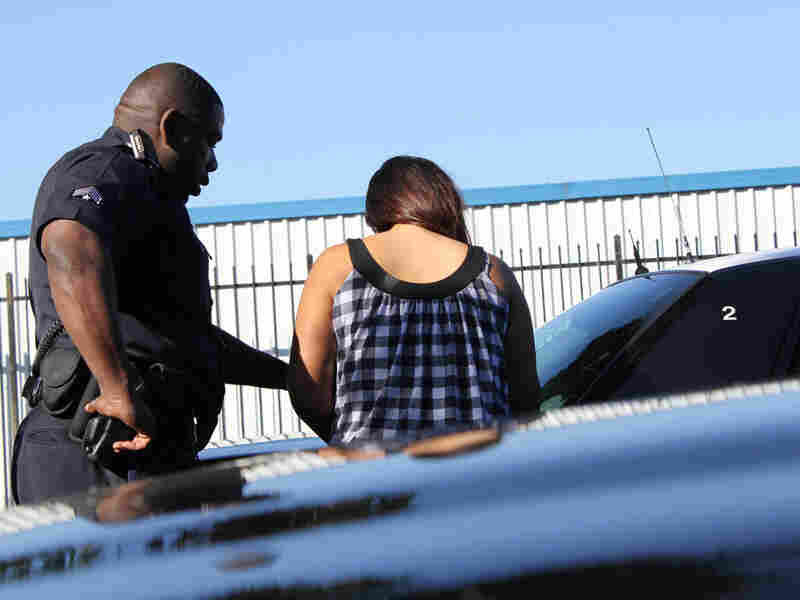 Oakland police used to put a priority on arresting johns. But with cuts in funding, the police now target the girls who've been trafficked for sex. Brett Myers/Youth Radio hide caption 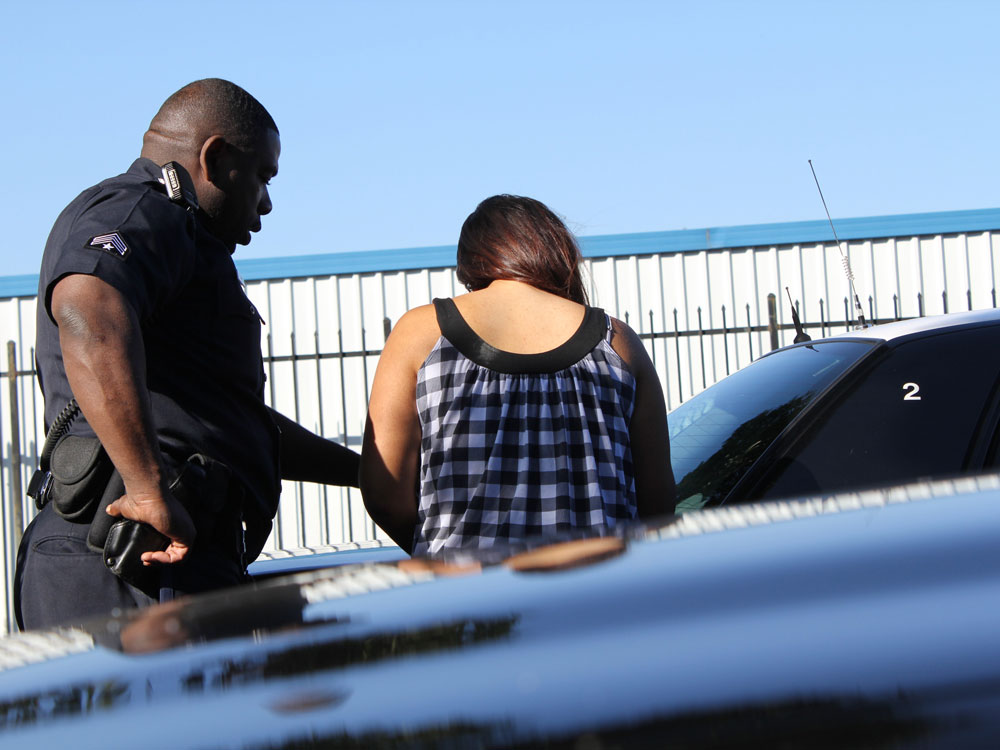 Oakland police used to put a priority on arresting johns. But with cuts in funding, the police now target the girls who've been trafficked for sex.

A plainclothes officer watches from across the street as a young woman in a short skirt stands on the corner outside an empty storefront. A squad car pulls up. For these sweeps, police use a county probation rule that prohibits girls with previous prostitution arrests from going near International Boulevard. Police say they don't have to see a girl making arrangements to get paid for sex to arrest her.

Two officers from the squad car approach the woman, handcuff her, and drive her to a command center consisting of a police van parked behind a nearby supermarket.

"It's busy around here," Wiley says. "We've only been here 45 minutes, and we already have five girls that we've detained, arrested. One is a juvenile, so they're going to do an interview with her."

The 15-year-old is separated from the adult prostitutes and placed in the back of a police car. She's wearing short shorts and sandals with shiny silver straps crisscrossing up to her mid-calves.

Police question the girl; a victims' advocate contracted by the county stands nearby and will remain in close contact with her throughout the booking process.

The police officer uses the victim's cell phone to call her parents, who live about 200 miles away, in Fresno, Calif. An officer explains that she's under arrest for soliciting prostitution. To release her, police have to put her in the custody of her parents or a legal guardian.

"All right, so what's going to happen now is she's going to go down to the police department in the juvenile hall section," the officer tells her parents. "And more than likely, you're going to have to come get her sometime tonight, OK?"

Police later said the girl's parents never picked her up. She was sent to juvenile hall — and she never divulged the name of her pimp.

By the end of this sweep, police had arrested seven adult women, three girls, one pimp and no johns. It's a small victory. Police estimate 100 minors work as prostitutes on The Track every night.

'The Easiest Person To Arrest Is The Child'

Though they arrest few pimps and prosecute even fewer, Oakland police say that arresting the girls is a necessary first step toward shutting down sex trafficking. But many children's advocates disagree.

Nola Brantley, who was trafficked as a teenager, now runs MISSSEY, a program that helps girls get out of the sex trade.

Every act of what's called ... 'prostitution' with these children is actually a form of child sexual abuse — and to take it further, child rape. So I don't think children who are raped should be criminalized, no I don't.

Brantley says these children are not really prostitutes.

"Every act of what's called ... 'prostitution' with these children is actually a form of child sexual abuse — and to take it further, child rape," she says. "So I don't think children who are raped should be criminalized, no I don't."

Alameda County Assistant District Attorney Sharmin Bock counters that arresting the girls is actually a way to save them — it gives the county a way to introduce victimized girls to social services. "Having a court involved with a case hanging over your head provides that added incentive to stay in a program, at the end of which a great likelihood exists that you will in fact recognize that you were in fact exploited," she says.

And, Bock says, the logistics of going after the men are daunting.

"It's very hard to get a hold of those johns. Because by the time you hear about it, they're just a number. It's the child telling you, 'I had sex with 15 different men yesterday.' They're long gone."

And there's another factor making it easier for johns to buy sex and for pimps to make money — the Internet. 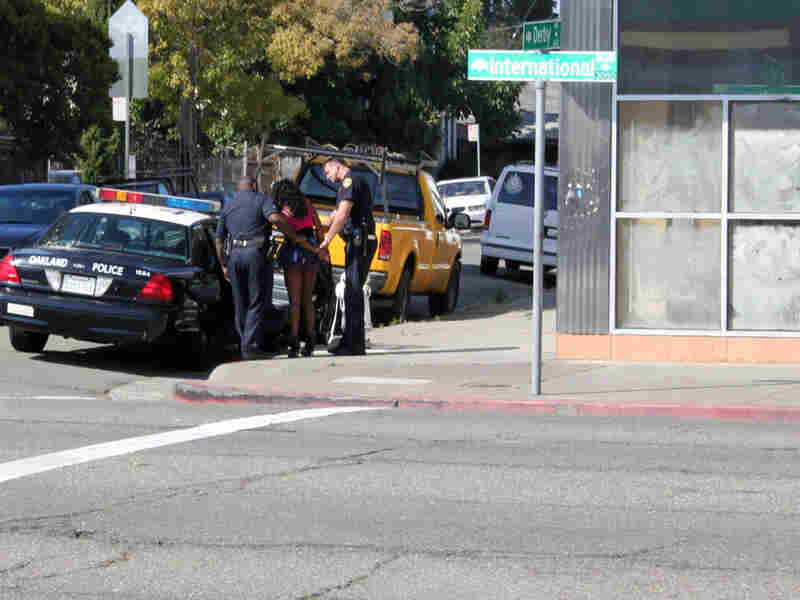 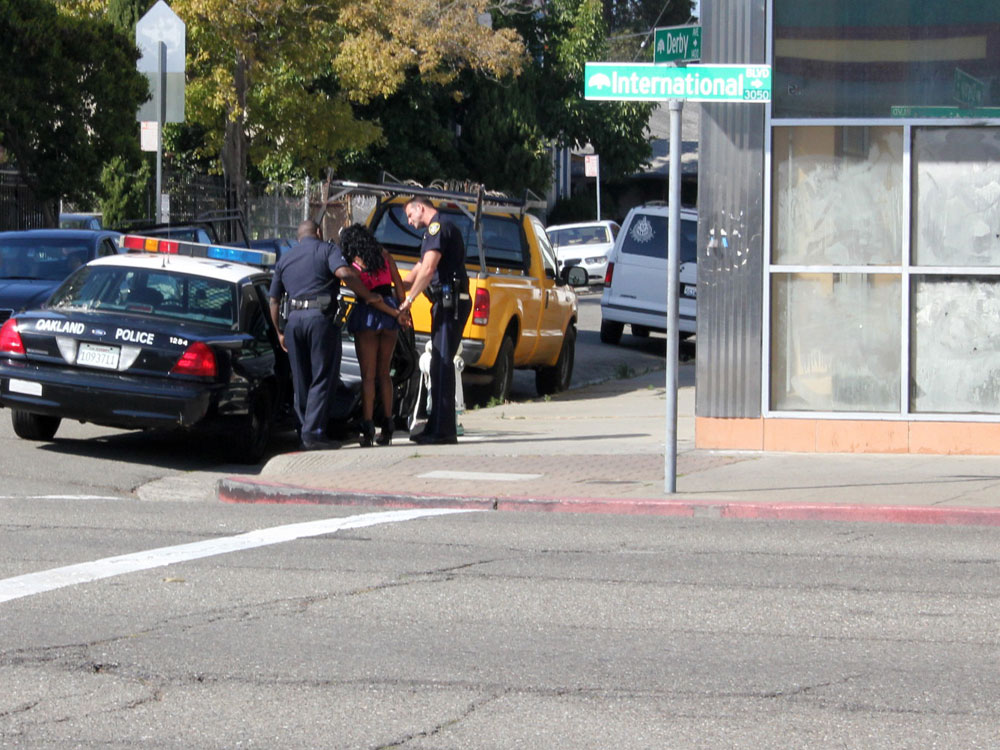 In a recent sting, Oakland police arrested seven adult women, three girls, one pimp and no johns. It's a small victory -- police estimate that 100 minors work as prostitutes in Oakland's red-light district every night.

Brittney and Darlene, two teenagers who escaped the sex trade, told Youth Radio they were trafficked on both the Oakland streets and online.

"He had me on Craigslist, Red Book, and there was another one. I think it was like Eros something — Eros Guide or something like that," Brittney says.

Craigslist has removed the "adult services" section that was used for the sex trade, but there are many other sites that fill the void. With help from the Internet, what used to be a local prostitution business is now global.

"Even though these guys think they're not leaving any track online, they are. Just a pimp posting an ad for these girls on myredbook.com — that gives us their interstate nexus right there, and we can then bring federal charges against him," Parker says.

"We could do it every day if we had the manpower to do it," Parker says. "Unfortunately, there are too few people working in the FBI who work these cases."