Accessibility links
In Paris, A Display From David Hockney's Pixelated Period The influential British artist has taken to making pictures with his iPhone -- and more recently, his iPad. An exhibition in Paris uses 20 of each device to cycle through hundreds of the works he's created on them. 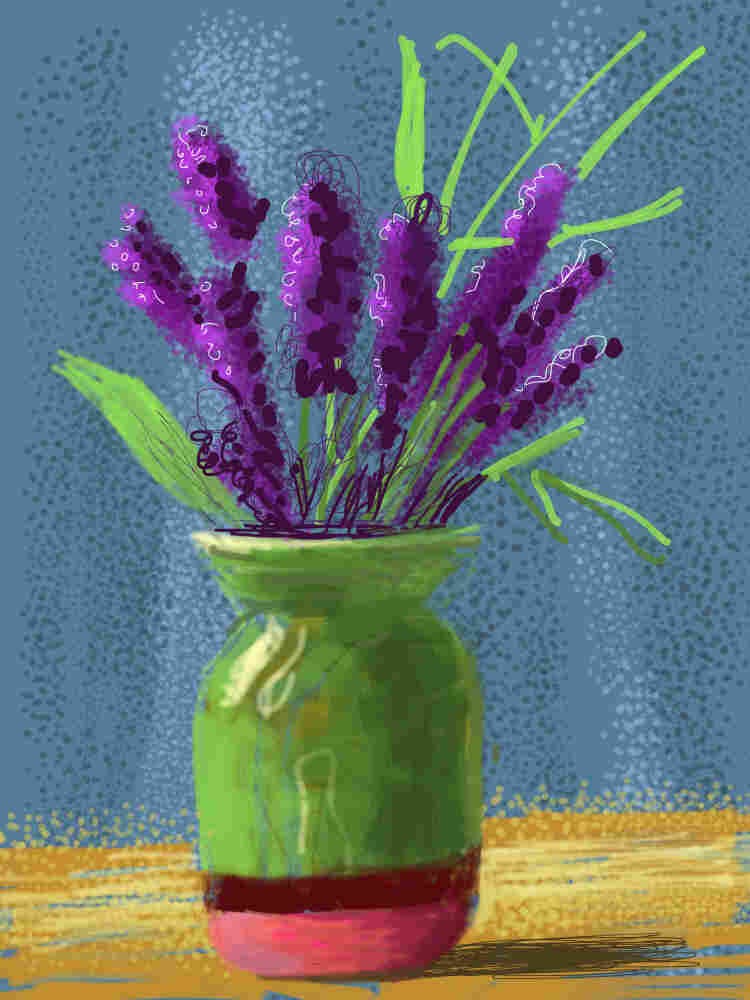 From the exhibition "Fresh Flowers," a drawing created by artist David Hockney with the creative tool that's been fascinating him lately -- the iPad. Untitled, 10 July 2010 is one of hundreds of digital works showing on 40 screens in the Paris exhibition, which runs through Jan. 30. David Hockney hide caption 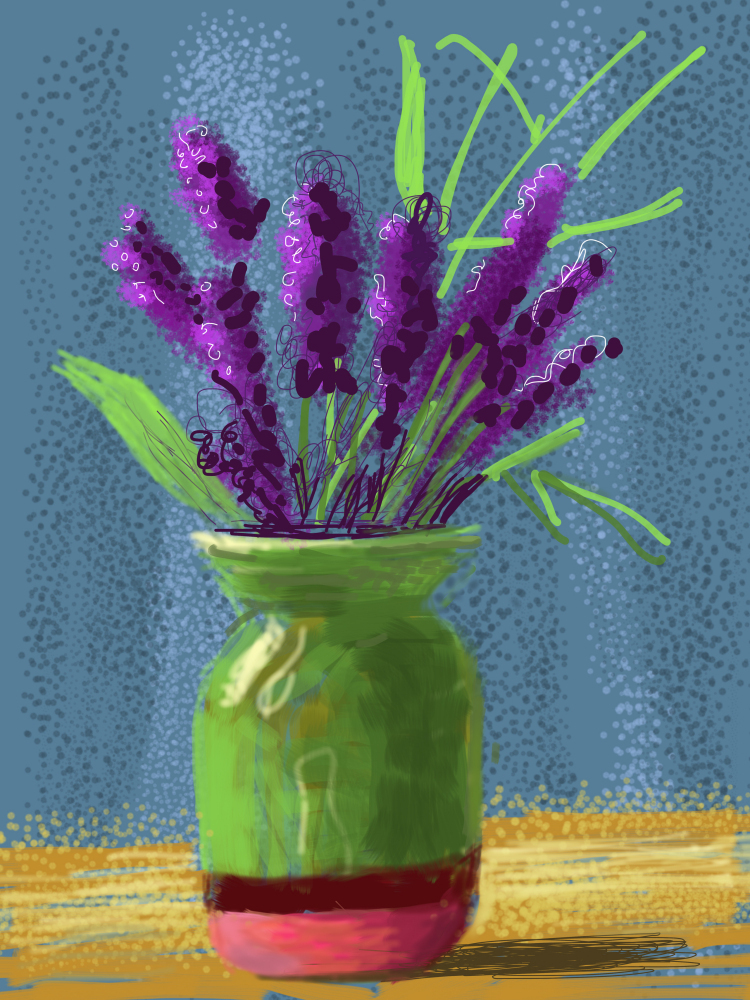 From the exhibition "Fresh Flowers," a drawing created by artist David Hockney with the creative tool that's been fascinating him lately -- the iPad. Untitled, 10 July 2010 is one of hundreds of digital works showing on 40 screens in the Paris exhibition, which runs through Jan. 30.

David Hockney thinks his current exhibition may be the first one that's ever been 100 percent e-mailed to a gallery. The 73-year-old artist is standing in the space in question -- the Pierre Berge-Yves St. Laurent Foundation in Paris -- trying to talk about the works, when his iPhone rings.

And he does, though it might have been more fun if he hadn't: He might have made us a new artwork right on the phone -- a little vase of flowers, or a face, or a landscape.

When Hockney first got the device about two years ago, he immediately realized it was a new medium for creativity.

"Incredible little thing, really, because it was like a sketchbook and a paintbox all in one," the artist says. Better, even: "No cleaning up. No mess."

That's because he's painting with an app called Brushes -- a small virtual paintbox on the phone's screen, into which Hockney dips a finger -- or 10 -- and makes pictures.

"He started out sending out these images -- little images that he would make on his iPhone -- to his friends," says installation designer Ali Tayar. "You wake up at 4 o'clock in the morning, and you're trying to go back to sleep, but on your computer is one of his images," Tayar says. "That is a treat -- a 'Hi,' a little flower."

Capturing The Morning, With Light Instead Of Inks

Hockney started making these vibrant digital "paintings" early in the morning at his home in Yorkshire, England. 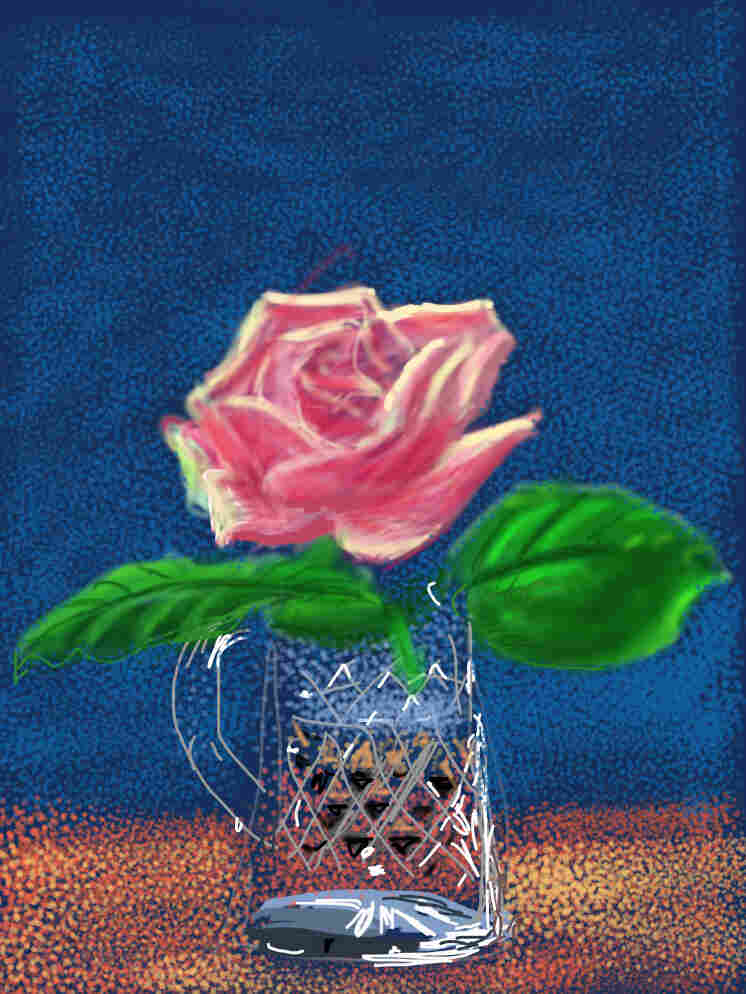 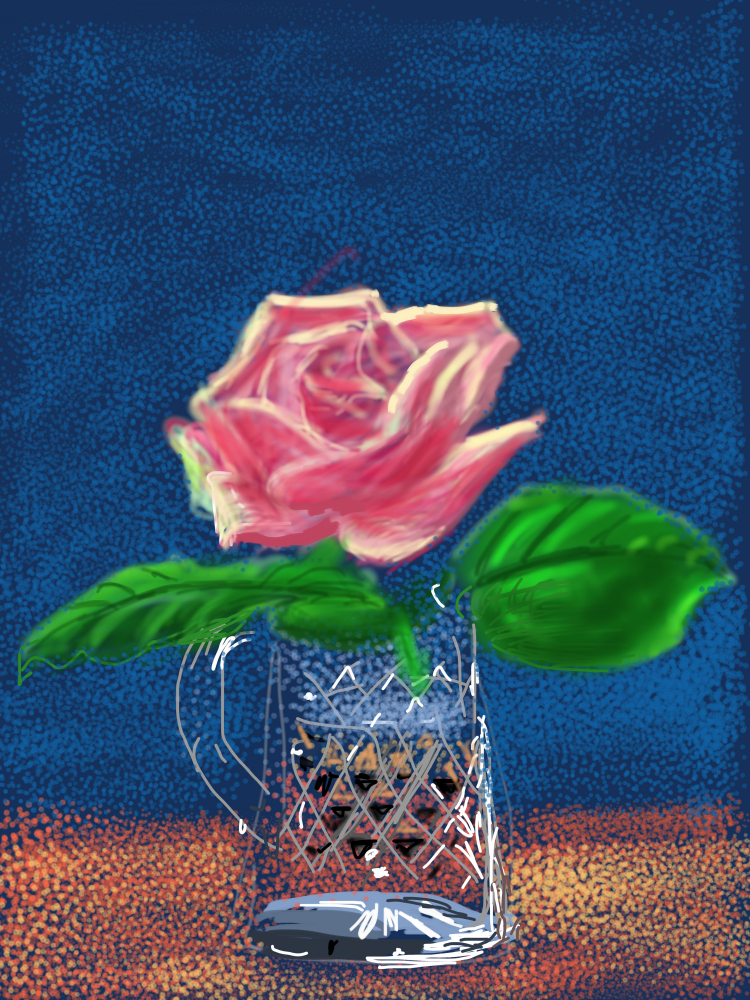 "From about late April to July, the sunrise would hit me in bed," he explains. But "if I'd [only] had a pencil and paper by the bed, I wouldn't have drawn a sunrise."

Black lead, white paper; not that much to get up for, really. But Hockney had his iPhone by the bed, so he could draw the sunrise on the phone, in color.

Then the sun hit a vase of flowers near the bed. Hockney painted that, too. More mornings, more paintings, until he'd made hundreds and hundreds.

"Some were drawn quite quickly," he says, "Some were drawn over two or three mornings, meaning I'd go back to them. And I sent them out -- lovely thing was, I could send them out to my friends. ... Often they were getting the sunrise that they'd missed."

As you might guess, the people on his list -- a couple of dozen or so -- said they loved receiving those early-morning e-mails.

For A Few Weeks, 'Fresh Flowers,' And Then A Sudden Fade

Then Hockney heard about the larger iPad. The artist has always carried a small sketchbook with him. Now he carries the electronic equivalent. The creative experience is different on the bigger device, he says.

"On the iPhone I tended to draw with my thumb," he says. "Whereas the moment I got to the iPad, I found myself using every finger."

And he really gets into it, reports curator Charlie Scheips.

"He says he sometimes gets so obsessed that when he's going, he rubs his finger on his clothes to, like, clean his finger -- as if he was using real paint."

Scheips coordinated the Paris show, a riot of non-paint paintings on luminous digital screens. One wall at the gallery is hung with 20 iPhones; a second wall carries 20 iPads. (The Berge-St. Laurent Foundation paid for all the devices -- it's not an Apple-backed effort, it says.)

All the gadgets are turned on 24 hours a day, and from time to time Hockney e-mails a new work to one of them -- a kind of artistic status update.

The show, called "Fresh Flowers," closes at the end of January. And then, installation designer Ali Tayar says, all the art will disappear.

"It's not the traditional painting," he muses. "It really doesn't exist. It's just light on a screen." 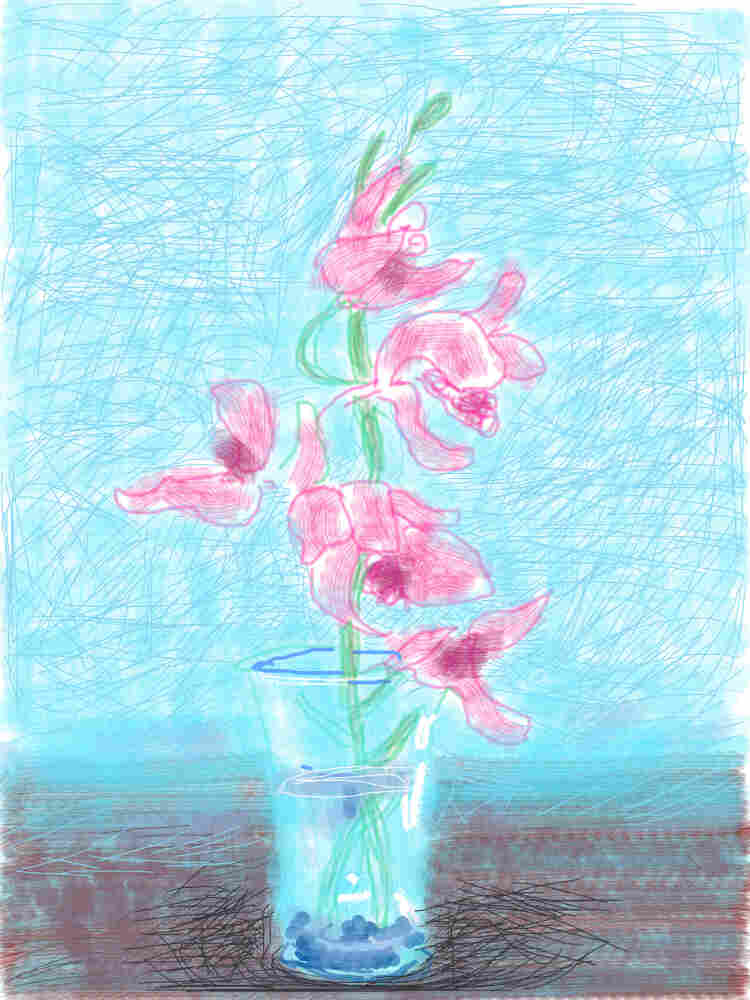 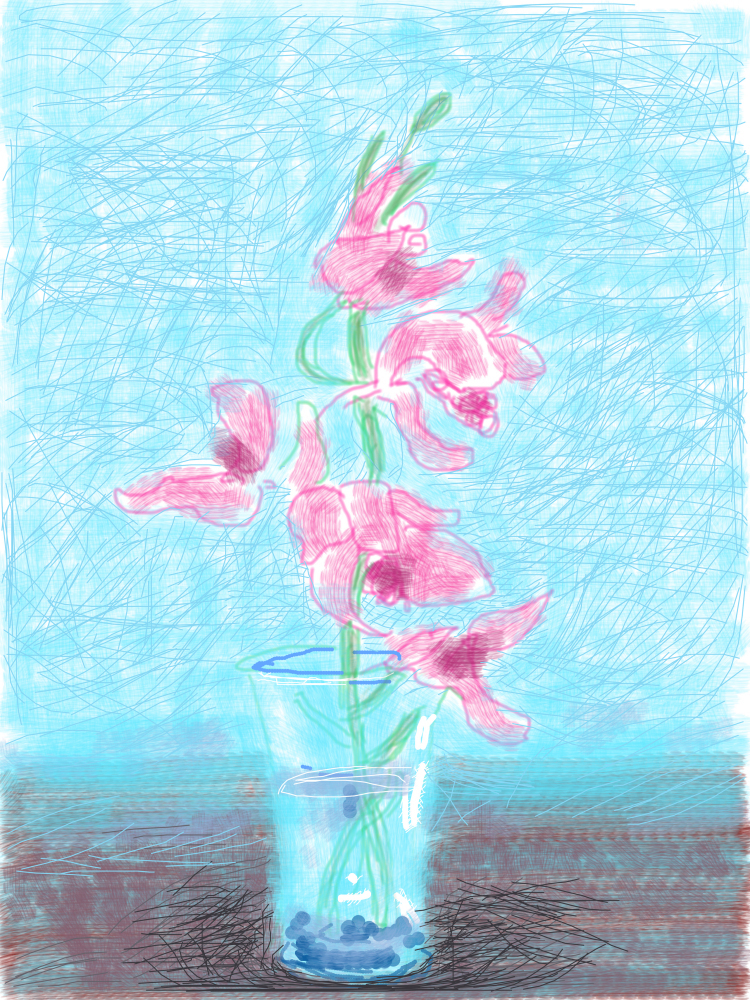 You could print a Hockney e-mail, if you were lucky enough to get one, but it would lose something in translation without that brilliant backlighting. The work only lives on these gadgets.

There's another hurdle, of course.

"We haven't figured out how to get paid," Hockney says. "At the moment it doesn't matter, but I will have to figure it out like everybody else."

Meantime, he's having fun making art with this newfangled but basically old-fashioned instrument. So are loads of other artists who are bringing back drawing this way, making works on digital devices.

Curator Scheips says Hockney has always been forward-looking -- years ago he made collages with Polaroid pictures, and used home copying machines for other works. This new phase, Scheips thinks, is just the logical next step.

But it's a big step, artistically.

"These things are all about surfaces," Scheips says. "It's all about mark-making. ... These drawings -- they may be small physically, but they're big and important in terms of his total oeuvre. And he thinks that this medium is gonna change the world."