Accessibility links
Secret Cable: China Said To Coordinate Google Attack In a classified diplomatic communication released by WikiLeaks, a U.S. diplomat quotes a source as saying top Chinese officials were behind the cyberattack on Google's operations in China last year. 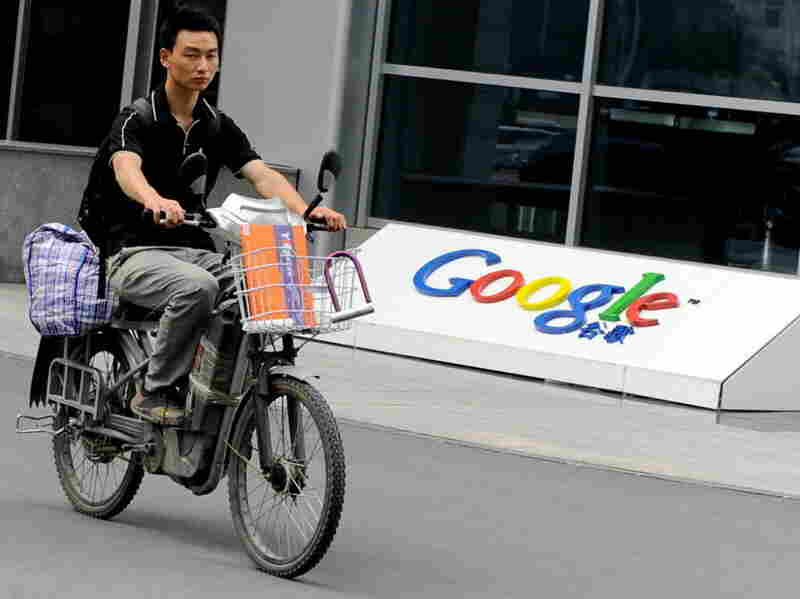 A leaked cable from a U.S. diplomat suggests that a cyberattack on Google's China operations was ordered by the highest level of the Beijing government. Franko Lee/Getty Images hide caption

The WikiLeaks release last weekend of secret diplomatic cables from the U.S. Embassy in Beijing adds a new complication to the already challenging U.S.-China relationship. Just as the Obama administration is trying to persuade the Chinese to take a firmer line with the North Korean regime, it has to deal with a report that a Chinese government source told the U.S. Embassy earlier this year a December 2009 cyberattack against Google operations in China was carried out on government orders.

Google reported in January 2010 that its computer infrastructure in China had been hit by a "highly sophisticated" attack that resulted in the theft of company secrets. Google also said it had evidence that a goal of the attackers was to gain access to the Gmail accounts of Chinese human-rights activists.

At the time, the company did not blame the Chinese government for the intrusion. But shortly thereafter, a U.S. diplomat in Beijing confidentially cabled Washington that "a well placed contact" was claiming the Google attack had been "coordinated" by the Chinese government "at the Politburo Standing Committee level."

I believed from the very beginning that this was a high-level, centrally coordinated effort. It was very obvious that, to be so effective, what was done [to Google] had to involve controlled intelligence agencies or electronic cyberwarfare agencies.

It was a serious charge. The Standing Committee of the Chinese Communist Party Politburo is made up of a handful of top party leaders.

"Those people do not act individually," says Larry Wortzel, a former intelligence analyst and U.S. military attache in Beijing. "They only act [on an issue] after discussing it in concert and coming to a unified decision."

The diplomatic cable from Beijing quoted just a single source, and it was not corroborated. Senior U.S. officials who follow China closely say they cannot be certain the Google attack was the work of the Chinese government.

But China experts say the report rings true. The cable only quoted the Chinese source as saying the government "coordinated" the Google attack, a point highlighted by James Lewis, a cybersecurity expert at the Center for Strategic and International Studies.

"The Chinese use private citizens for intelligence activities," Lewis says. "So instead of having a government agent engage in the activity, they'll have a private citizen -- a hacker, a scholar, or a researcher."

"I believed from the very beginning that this was a high-level, centrally coordinated effort," Wortzel says. "It was very obvious that, to be so effective, what was done [to Google] had to involve controlled intelligence agencies or electronic cyberwarfare agencies."

Wortzel, a member of the U.S.-China Economic and Security Review Commission, believes the Chinese government would have wanted to hack into Google for political reasons, such as to keep tabs on dissident e-mails and to control the information available to the Chinese population.

Indeed, a second cable from the U.S. Embassy in Beijing suggested that the country's propaganda expert on the Politburo Standing Committee, Li Changchun, had his own motive to support  the Google attack. He reportedly had done a search of his own name and discovered critical information about himself on the Google website.