Accessibility links
Obama, GOP Reach Tentative Deal On Tax Cuts In exchange for extending Bush-era tax cuts for the wealthy, the president won Republican backing for additional jobless benefits, as well as other tax breaks directed at the middle class. But Obama, who has to sell the deal to Democrats, acknowledged that no one will be entirely happy with the compromise. 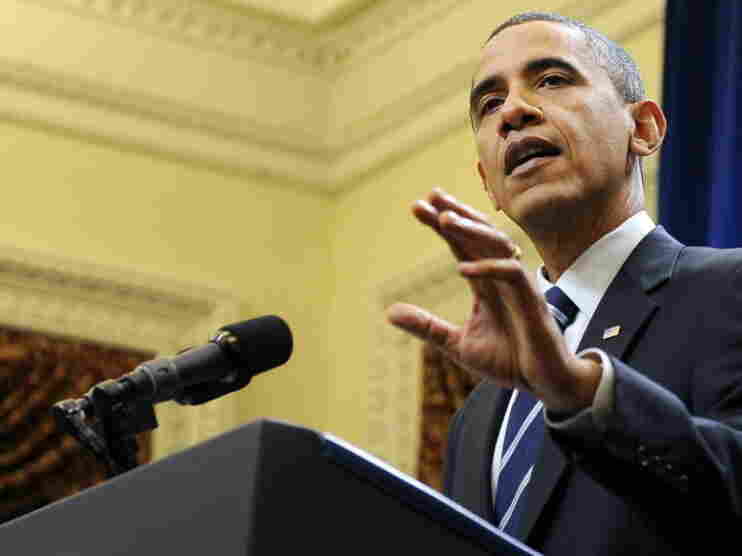 Tax rates, even for America's wealthiest families, would remain unchanged next year under a tentative deal worked out between President Obama and congressional Republicans.

In exchange for extending Bush-era tax cuts for the wealthy, Obama won Republican backing for additional unemployment benefits, as well as other tax breaks directed at the middle class.

The president will have to sell the deal to Democrats, who hold the majority in both houses until January, and who had wanted to extend only the middle-class tax rate and jobless benefits.

Obama admits that no one will be entirely happy with the compromise he struck with Republicans, including him.

For years, Obama campaigned against extending Bush-era tax cuts on incomes in excess of $250,000 a year. But Senate Republicans made it clear over the weekend that unless the rich got their tax break, no one else would, either. On Monday, the president reluctantly went along with a broad two-year extension.

The American people didn't send us here to wage symbolic battles or win symbolic victories. They would much rather have the comfort of knowing that when they open their first paycheck of January 2011, it won't be smaller than it was before.

"Make no mistake: Allowing taxes to go up on all Americans would have raised taxes by $3,000 for the typical American family," he said. "And that could cost our economy well over a million jobs."

With polls showing many Americans in favor of higher taxes on the rich, some Democrats wanted to go to the mat, in hopes of isolating Republicans as the party of millionaires. But with all tax cuts due to expire at month's end, and a more Republican Congress about to be sworn in, Obama was unwilling to risk that strategy.

"The American people didn't send us here to wage symbolic battles or win symbolic victories," he said. "They would much rather have the comfort of knowing that when they open their first paycheck of January 2011, it won't be smaller than it was before."

Senate Republican leader Mitch McConnell of Kentucky said in a statement Monday that he appreciated the president's "determined efforts," adding that he is optimistic that congressional Democrats will be equally open to compromise.

In addition to lower income-tax rates on the wealthy, Republicans won agreement for a lighter tax than Democrats wanted on big inheritances: 35 percent on estates worth more than $5 million.

In exchange, Obama won GOP backing for another 13 months of jobless benefits for the long-term unemployed and a two-year extension of additional tax breaks, aimed at working- and middle-class families.

"If Republicans truly believe we shouldn't raise taxes on anyone while our economy is still recovering from the recession, then surely we shouldn't cut taxes for wealthy people while letting them rise on parents and students and small businesses," Obama said.

The framework agreement does not include the president's signature "Making Work Pay" tax cut, a part of the stimulus package that provided up to $800 a year for working families.

Instead, he is calling for a one-year cut in the portion of payroll taxes that workers contribute to Social Security. That's less progressive in helping poor families than Making Work Pay, but it puts twice as much money into workers' pockets economy-wide: $120 billion next year, which the president said will help the economy.

None of these tax cuts are offset with spending reductions, so in the short run at least, they will add hundreds of billions of dollars to the federal debt. That's less red ink than would have been spilled, though, if some or all of the Bush-era tax cuts had been made permanent.

The president is clearly hoping to convince the public over the next couple of years that some of the tax cuts must be sacrificed.

And because the latest deal would expire in 2012, the tax cuts will be a campaign issue in the next presidential election, just as they were in the last one.