Accessibility links
Brad Ellis: 'Glee's' Piano Man, Perfectly Happy With The Silent Treatment The surly guy behind the McKinley High piano turns out to have plenty to say about working with those show-choir kids. 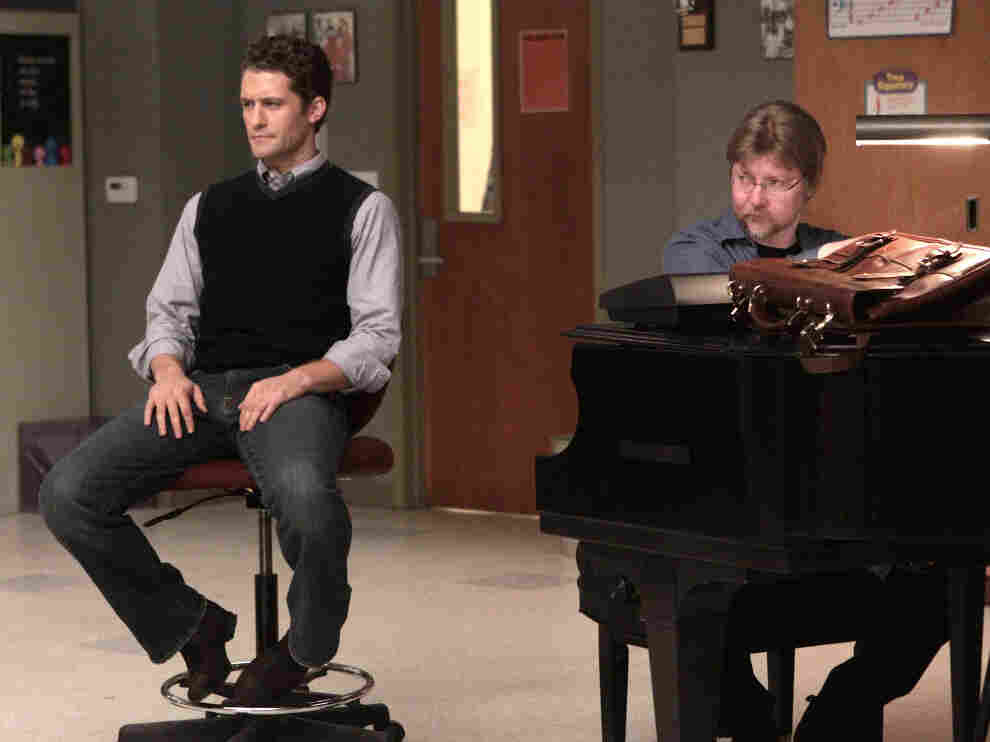 Call some professional pianists "accompanists," and they may bristle as if you've just asked them to play "Chopsticks." Not Brad Ellis. "Accompanist" is his official title as the house pianist on Fox TV's musical comedy Glee -- and he's proud of the gig.

Fans of the show know Ellis simply as Brad, the black-clad, mad-at-the-world blond guy who sits at the piano and never says a word. Offstage he's quite the talker, though, and his credits include everything from teaching Jonathan Groff to play Queen's "Bohemian Rhapsody" to keeping Cory Monteith singing on key. (OK, so maybe Ellis hasn't been totally successful on that latter count.)

But Ellis's musical-theater skills and sensibilities -- he spent nine years helming the farce Forbidden Broadway --influence every episode. He took a few minutes out of his day for a conversation about a number of things, starting with his 15 years in college.

Where did you get your musical training?

Berklee College of Music in Boston. Probably my best experience there was getting to work with Dizzy Gillespie. He gave a clinic and picked a group of students to be his rhythm section for a tour of colleges in Maine. What I learned from that is that no matter how famous you are, you always have to keep paying your dues.

Is that true for you, now that you are a television celebrity?

I'm not a celebrity. I'm a sub-lebrity. There's a difference.

So did you graduate from Berklee?

I did. But not right away. At Berklee, getting a gig and dropping out was a good thing. [The degree] took me 15 years, and even then it was sort of a badge of dishonor. It meant I wasn't working and had time to send some stuff in.

You ended up working on Glee because you knew the casting director, right? But you didn't know you'd actually be on the show.

Right. I'd worked with Robert Ulrich. He's a casting director, but he's also so much more. I knew he was extremely good at his job, quickly seeing inside actors to steer them towards the right parts. One of the things I'm good at is teaching people that singing is just one more way of using their voices. So I had been working with a lot of the cast members, especially Cory Monteith, who didn't have a singing background. And one day (creator) Ryan Murphy said to me, "You better get used to wearing all black." And I thought he was talking about my fashion sense.

The next day I came to a meeting at Fox, wearing black from head to toe, and Dante Lorenti, another one of the producers, told me that's not what Ryan meant. He meant to wear black when I was on the set and we were filming.

So what kind of instructions have you been given about your character?

"You hate all of them, and you hate children." We even did a scene, as an exercise, where I tear all the music off the piano and storm off. But I have had occasions when some directors -- we have such great guest directors -- have said to me, "You can soften up here." And in that sense I feel like I have a character arc.

How often are you on set, and what's your role [there]?

I'm there two or three days a week. Basically, I am Plan B. If a producer decides we aren't going to use a full version of a song, they look over at me and say, "Can you come up with something?" And I do. I'm old-school Broadway like that.

There's a Facebook campaign to give your character lines. Any chance that will happen anytime soon?

No. We have to keep the act going. I suppose if I ever do speak it will be something really angry and terrible. I do have a scene where I get to do something fun in the Super Bowl episode, which I'm not allowed to say anything about. I've been offered some acting roles since I started on Glee, and I tell people I have great range, as long as I only have to play myself.

So many times, actors in theater or television or films have to fake playing instruments. Do you ever feel like your role is redemption for musicians?

All the musicians on the show are members of the musicians' union. And I've worked with some of the actors who had to play the piano, so that even when the music was overdubbed, they were actually playing. But yeah, Jane Lynch didn't even know I was a real musician. When we finally had a scene together, she said, "I thought you were an actor playing the piano." And I said, "No, I'm a pianist playing an actor." And she said something like, "We're all just playing actors."

Have you successfully placed any songs on the show?

[Murphy] chooses all the songs. But he's quite a showman. For a while I kept playing "Rose's Turn" from Gypsy between takes, and he'd sing along. Finally he had Kurt [Chris Colfer] sing it. I'd like to take credit for that. Subversively.

One of the most poignant moments you've been featured in so far was the Lady Gaga episode late last season, when Lea Michele and Idina Menzel [as a mother and the daughter she gave up for adoption long ago] stand at the piano and sing "Poker Face."

That was very real. One of the most Method-y moments that we've ever had on the show. There's this sort-of improved line where Lea says, "Oh, that's just Brad. He's always around." Lea and Idina decided that they wanted to remain in character between shoots, and so I did too. I didn't say anything. I just stayed sort of dour all day. But it worked. It was a great scene.

I've had pianists get upset if I refer to them as accompanists. Are you in that camp?

No. Absolutely not. Consider yourself vindicated. I have a talent for getting people to sing better, and I'm very proud of that. If I were a singer, I would hate to sing with a pianist who doesn't want to be called an accompanist.

You have a band [the Brad Ellis Little Big Band], and you've done lots of consulting and stage work. Has being on Glee curtailed those gigs?

It's a challenge. I can only book gigs on the weekends when we aren't filming or doing events. I even got to go to the White House, because Sasha and Malia like the show. That was really amazing. Sara Bareilles and all these other people were there. So we did some numbers, but then the next act was this 8-foot-tall rodent talking about traffic safety. Humility is important in this business.

[The band doesn't] play together as often as I'd enjoy right now, and the personnel changes a bit when we do -- several of my players are regulars in the Dancing with the Stars band -- but I'm sure we haven't played our last gig.

But in a lot of ways, Glee has been good, because I have a lot of downtime on the set, and I can use that time to write my own music.

That kind of fits with your character, doesn't it, if you are off in a corner by yourself, scribbling down notes?

I guess. But this really is the best cast I've ever worked with. They are all such hard workers, and I love being on set with them.

So, can we expect to see you tonight in the Christmas episode?

Absolutely. We filmed it two weeks ago, and I am still plucking fake snow out of the piano and my tux jacket pockets.