Accessibility links
TV Network Expands Bloomberg News' Horizon Many news outlets are shrinking in this economy, but Bloomberg News keeps expanding its ambition and reach -- especially with its television network. Touting the quality of its reporting, Bloomberg TV hopes to set itself apart from CNBC and other cable rivals. 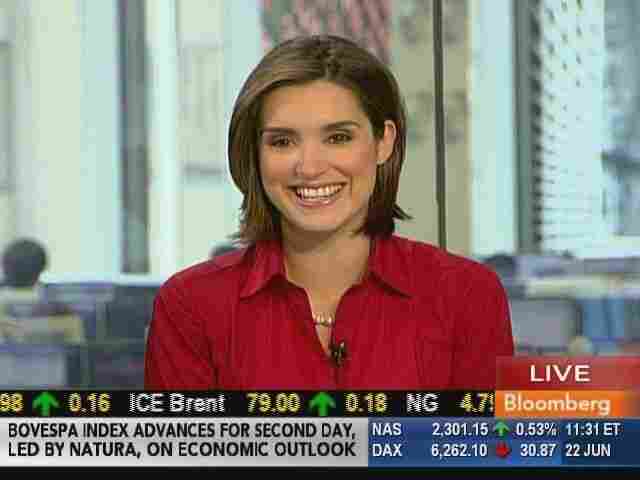 Just last year, Margaret Brennan walked away from the nation's leading financial cable news channel to a rival with such small ratings that its executives currently do not pay to find out how many people are watching.

At CNBC, Brennan rose up from lowly assistant to the late Louis Rukeyser to become an on-air correspondent. She has nothing but good things to say about her bosses there. And she easily could have stayed at CNBC, the ratings leader in TV business news, which mints stars like Maria Bartiromo, the original so-called Money Honey.

At The Helm Of A Two-Hour Show

But Brennan, now host of InBusiness With Margaret Brennan on Bloomberg Television, says the payoff is clear.

"For me, you know, a year in, I know it was the right choice, because I've done a lot in a short period of time," Brennan says. "There's a lot more to be done."

Brennan anchors the briskly paced two-hour show every weekday morning from a stylish studio in the middle of Bloomberg's newsroom in New York.

The show's focus is global in scope. Brennan typically interviews U.S. and foreign lawmakers, regulators, central bankers, corporate chiefs, finance ministers and investment analysts. She's conversant in Arabic and has hosted from Dubai and Saudi Arabia, as well as Ireland and Davos, Switzerland.

And Brennan is doing all this for a news organization that appears to be on the move. For all the hand-wringing about the terrible finances besetting the news industry, Bloomberg News keeps on expanding its ambition and reach.

Brennan says she had to get used to the "Bloomberg way," which is intense and distinctive. The company gives away a lot of food because bosses discourage taking time away from the office.

As I interviewed Brennan, two employees were fast asleep on nearby segments of a padded-purple sculpture that stretched for 30 feet.

It's understandable: Staffers work so hard they feel as if they live at the company's headquarters, which resembles a glass spaceship that takes up an entire city block.

A Reflection Of The Founder

The company's hyperkinetic pace reflects the metabolism of its founder, New York Mayor Michael Bloomberg. After all, Bloomberg News is an offshoot of Bloomberg's famed financial services business.

For a generation, the specialized computer terminal called "the Bloomberg" has been serving up increasingly sophisticated proprietary data for clients like banks, governments and investment firms. People pay nearly $20,000 a year for each of the 300,000 terminals. Bloomberg LLP has made a lot of money serving precisely that audience.

And Bloomberg Television is seeking to retain the DNA of its parent company rather than mimic the values of the cable TV industry.

At CNBC, executives see "their analogues as kind of MSNBC and Fox and CNN -- left/right, two sides of an issue," says Daniel Gross, the economics columnist for Yahoo Finance. "Bloomberg, while it is on cable, stands apart from that because it has more of that Bloomberg mentality."

Officials at CNBC and the Fox Business Network declined to comment for this story.

The Search For Global Thought Leaders

Gross says Bloomberg isn't searching for a mass audience. Rather, it seeks to attract global thought leaders who are making decisions in the worlds of finance, government and business. In financial centers around the world, televisions at hotels and bars typically include feeds from CNBC or Bloomberg.

But right now, Bloomberg has so few American viewers that it doesn't even pay Nielsen Media Research to estimate how many people are actually watching.

Historically, the television channel was simply treated as just another way to remind subscribers of the Bloomberg brand -- almost as though it were a global billboard.

David Rhodes, the head of Bloomberg Television in the U.S., says the channel now has greater journalistic ambitions.

"Cable news punches above its weight when it comes to its influence," says Rhodes, the former vice president for news at the Fox News Channel. "It would be hard not to conclude that from looking at the impact of cable news on media today."

He argues the only way to build an audience is to convince viewers of a consistency in the quality of the channel's programs, especially in its reporting.

"What I'm hoping we can do is honestly breaking news in the space that we cover on television," Rhodes says. "And I think if we can do that reliably to where an audience becomes convinced that that's going to be there -- that's a huge accomplishment."

Taking On The Fed

Bloomberg is known for the breadth and depth of its reporting on corporate and financial matters. It sued the Federal Reserve for documents on the bailout of Wall Street -- and won.

The network also aggressively covered the BP oil spill in the Gulf of Mexico with a layered approach that included stories on the environmental implications, the corporate and government response and the intrigue behind the scenes at BP.

Reporters tracked the movements of then-CEO Tony Hayward as he darted around the globe while the crisis deepened.

CNBC does have a few reporters who break stories, and it often lands interviews with major newsmakers and corporate officials.

But its viewers are often treated to economics as sport: Host Jim Cramer tosses toy bulls and bears around the set of his daily program, Mad Money. CNBC Chicago commodity pits reporter Rick Santelli's rants against people who defaulted on their mortgages helped give fuel to the nascent Tea Party movement.

"It's tempting to join the food fight that sometimes passes for business news -- who can scream loudest, and so forth," says Norman Pearlstine, Bloomberg News' chief content officer.

"We think there's an audience that is willing and able to be more reflective, and I think our television tries to speak to it," he says.

Pearlstine is the former top editor of The Wall Street Journal and Time Inc.

On one day alone, Bloomberg News hired four Pulitzer Prize winners away from the Journal, and it has raided other newsrooms as well.

Bloomberg also leapt at the chance to buy the money-losing but prestigious BusinessWeek magazine. It is also creating a new unit to track legislation and policy in Washington, largely with an eye toward creating an entirely new stream of revenue from clients in business and finance.

And Bloomberg's TV network has scooped up journalists from ABC, CNN and NPR in trying to build a slicker television product.

ABC appears interested in getting in on the action: The network's chief, Anne Sweeney, recently acknowledged it had been in talks with Bloomberg TV about a partnership.

Bloomberg's Brennan could have stayed on a safer path at CNBC. She had plenty of appearances on NBC's Today and MSNBC and she was clearly on the rise.

"Is there a trade-off with not ... [having] some sense of yourself as a trading room celebrity?" Brennan asks. "I never wanted to be that. I wanted to be someone who could talk to the most interesting and informed people all the time. And now I have an excuse to do that."