Accessibility links
Obama Lashes Out At Left, But They're Still Angry President Obama struck back on Tuesday against criticism that he caved on the tax cut deal with Republicans. But congressional Democrats hardly seemed swayed after the president's press conference, saying, "This is the president's deal" and "If I vote for it ... it will be being dragged to this position."

Obama Lashes Out At Left, But They're Still Angry

Obama Lashes Out At Left, But They're Still Angry 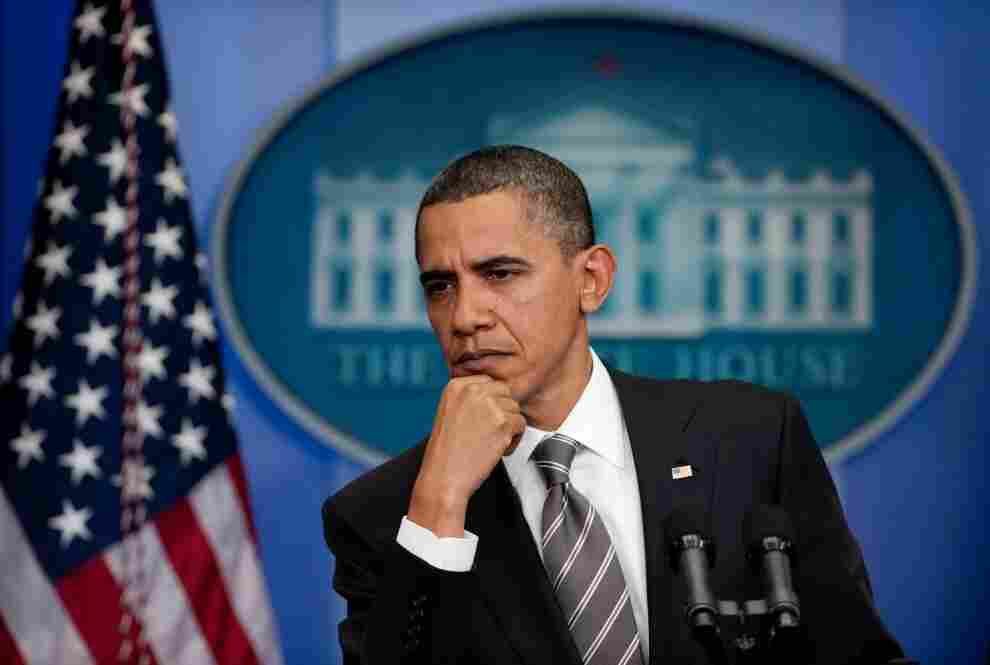 President Obama on Tuesday forcefully defended the compromise he reached with congressional Republicans on a tax cut plan, calling it critical to aiding millions of jobless Americans and strengthening the nascent economic recovery.

In his second press conference on the proposal in as many days, Obama for the first time pushed back against fellow Democrats angry that he agreed to the Republican position that the Bush-era tax cuts should be extended for all income levels and not capped at $250,000, as the president had previously pledged to do.

If I vote for this, it will not be silently; it will be being dragged to this position.

Obama called the compromise package "a good deal for the American people." But the president also said he had little choice but to agree to the Republicans' terms to avoid endangering struggling Americans dependent on the tax breaks and unemployment benefits.

"It's tempting not to negotiate with hostage takers -- unless the hostage gets harmed," he said of his talks with Republicans. "In this case, the hostage was the American people, and I was not willing to see them get harmed.''

"I don't think there's a single Democrat out there who, if they look at where we started when I came into office and look at where we are now, would say that somehow we have not moved in the direction that I promised," Obama said.

"Take a tally. Look at what I promised during the campaign. There's not a single thing that I've said that I would do that I have not either done or tried to do. And if I haven't gotten it done yet, I'm still trying to do it."

Obama pledged to take up the fight again in 2012 when the tax cuts would expire under the new deal. He reiterated that he still opposes the Republican position that high-income earners should get the extension, delivering this message to "my Republican friends": "I'm looking forward to seeing them on the field of competition over the next two years."

'This Is The President's Deal'

Vice President Biden met Tuesday with Senate Democrats to sell the plan. Biden has been a key player in tense private negotiations, using his long-standing relationships in the chamber, as a former senator, to build support.

"If I vote for this, it will not be silently; it will be being dragged to this position," Sen. Mary Landrieu (D-LA) told reporters Tuesday. She suggested that she would publicly voice her displeasure from the Senate floor about the plan's fiscal impact by saying, "I can't imagine this president leading the country in that direction."

Republicans, having gotten what they wanted, say they are confident that their members will support the plan.

"The agreement is essentially final," Senate Minority Leader Mitch McConnell (R-KY) told reporters before the president's press conference. He said he expects "the vast majority" of Republican senators to vote for it.

However, Democratic leaders in Congress are offering tepid reviews of the plan, reflecting deep anger at Obama for striking the deal.

"We're going to have to do some more work,'' Senate Majority Leader Harry Reid (D-NV) said after the members met with Biden.

A statement issued by House Speaker Nancy Pelosi (D-CA) was slightly more terse: "We will continue discussions with the president and our caucus in the days ahead.''

On Tuesday, Obama scolded congressional Democrats and liberal groups for preferring that he would have dug in more deeply against Republicans at the risk of hurting Americans and forestalling economic recovery.

"People will have the satisfaction of having a purist position and no victories for the American people," Obama said.

Rep. Raul M. Grijalva (D-AZ), co-chair of the Congressional Progressive Caucus, said he and his colleagues will "have a difficult time voting for it" because Obama gave in to the Republicans' "blackmail." He said Obama should have held out and let Republican lawmakers feel the heat from public opposition against extending tax breaks for the wealthy.

"I think the Republicans would have caved," Grijalva said.

The lawmaker, responding in an interview to Obama's criticism of fellow Democrats, said, "I don't think there's anything purist about it. Once again the Democrats are being asked to carry the heavy load, and we're the ones on the spot. This is the president's deal, and I don't necessarily think that binds every Democratic member of Congress."

The plan would extend for two years the tax cuts for all Americans enacted during the Bush administration that are due to expire at year's end. Obama agreed to the Republicans' demand to also extend tax breaks for income at all levels as well as lower taxes on capital gains, dividends and multimillion-dollar estates.

In exchange, Obama secured the continuation through 2011 of unemployment insurance payments, which would have begun to expire for roughly 2 million people this month. Obama, in his remarks, repeatedly underscored the continued protection of jobless Americans -- in the face of a 9.8 percent unemployment rate -- as his primary motivation for agreeing to the deal.

The president also got a one-year, 2-percentage-point reduction in payroll taxes collected for Social Security. White House and other estimates put the total potential savings for many Americans at $1,000 to $2,000.

During Tuesday's press conference, Obama also highlighted other provisions that will be extended under the deal, such as tax breaks for the payment of college tuition and for small businesses that reinvest in operations.

The White House is counting on the plan to stimulate economic growth, at once freeing up cash that can encourage consumer spending and enticing companies to reinvest in operations and hire after having severely ratcheted back spending for more than a year.

Some analysts estimate public companies are holding up to $2 trillion in revenues to fatten cash reserves while awaiting further signs of a strengthening recovery.

"This package will help strengthen the recovery," Obama said. "That I'm confident about.''

Yet the package would increase the federal deficit by at least $700 billion, a prospect that infuriates moderate Democrats in the Senate, which will have to vote on the package.