Accessibility links
A Spandex-Set Field Guide: Get To Know Your Greens (Hornet, Lantern, Arrow) A Green Hornet movie, a Green Lantern movie, and Green Arrow on TV, too? Which one's which? We offer a guide to the current glut of emerald-garbed superheroes.

A Spandex-Set Field Guide: Get To Know Your Greens (Hornet, Lantern, Arrow)

A Spandex-Set Field Guide: Get To Know Your Greens (Hornet, Lantern, Arrow) 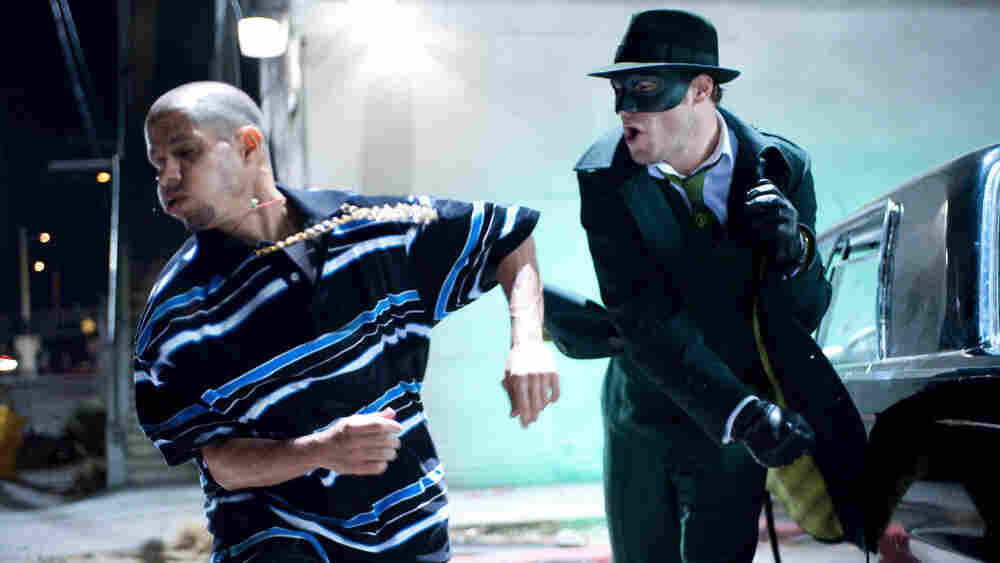 Seth Rogen in the upcoming movie in which he plays either Green Hornet, Green Lantern, or Green Arrow. But which one? Jaimie Trueblood/Sony Pictures hide caption

We're less than a month away from the premiere of Green Hornet, starring Seth Rogen and directed by Michael Gondry.

A few weeks back, the first official trailer for Green Lantern was released, starring Ryan Reynolds and directed by Martin Campbell.

And over on the 10th and final season of the CW's Smallville, Justin Hartley's Green Arrow continues to have really good arms.

No matter! We're here to help, with this, the 2nd installment of The Official Monkey See GAFFE-B-GON (tm) Guide to the Nomenclature of Nerddom. Back by popular demand! If you define both of those last two words very generously!

History: First appeared in a 1936 radio series. Two movie serials quickly followed, along with pulp novels, comics from various publishers, and a short-lived 1960s TV show starring Van Williams as Reid and Bruce Lee (yeah, that one) as chauffer-valet-mechanic-buttkicker Kato.

From the trailer, about which Monkey See contributor Marc Hirsh has written  eloquently, it looks like they're sticking close to the classic origin: Britt Reid is a spoiled, profligate rich kid who, upon inheriting his father's newspaper, decides to infiltrate the underworld in disguise and work secretly against it. Criminals, and the police, think him a villain.

Look For: The Flight of the Bumblebee, his classic theme song. If the movie producers are looking to score AP-level nerd cred, they'll find a way to note that the Green Hornet's creator, Francis Striker, also created The Lone Ranger, and established that the two were related -- Britt being the son of Dan Reid, the Lone Ranger's nephew. (Striker also created Sgt. Preston of the Yukon, by the way. But don't look for Rogen to shout Preston's catchphrase "On, you huskies!")

(Even though that. Would be. AWESOME.)

Schtick: Space cop. One of many. His beat: Our neck of the universe.

History: Um. This could take a while. Suffice it to say he's not the first, or the only. But he first appeared in 1959, and has been a solid second-tier player in the DC Universe ever since.

I mean, sure. There was that time he turned evil, murdered thousands, and died.

But he got better.

The precis: Hal Jordan is a cocky test pilot who finds himself chosen to join an intergalactic corps of do-gooders.

Distinguishing Features: A magic ring powered by its wearer's willpower which must be recharged every 24 hours. (That 24-hours thing is a hard and fast rule, and cannot by improved by turning off push notifications and bluetooth.) Jordan's a classic cop-who-lives-by-his-own-rules, albeit one in a green leotard.  Thus he's he's got his own angry police captain -- several of them, actually, in the form of the Guardians of the Universe: Think Oompa-Loompas, only blue, and imperious, and given to dressing like a gospel choir.

Look For: That leotard, which the movie's CGI renders as not so much skin-tight as ... skin. (NOTE: Not a complaint.) The Green Lantern Corps itself: 3600 aliens in matching green leotards. Much talk of Willpower, and Fear, and ... uh ... the color yellow.

(Historically, the ring could not affect anything colored yellow.)

(Which is one reason so many of Green Lantern's nemeses used to stockpile cans of Behr "Sun Splash, "Goldfinch" and "Lemon Tart.")

Recently Green Lantern writer Geoff Johns has tinkered with that, retconning an elaborate mythology involving a being of "yellow energy" and other, similar entities that represent different colors on the "emotional spectrum" and ... Yeah, you know what? Never mind. You're good.

You'll also want to look for the Green Lantern Oath, recited as each member of the Corps recharges his or her ring in a "power battery" (the nominal "lantern"). It's kind of goofy, that oath, but it's a big part of what makes Green Lantern Green Lantern.

And last summer at Comic-Con, Reynolds acquitted himself well.

Re: That clip: Awwwww.

Oliver Queen is a spoiled young millionaire who gets shipwrecked on a desert island. To survive, he constructs a crude bow, as well as and a variety of arrows from green reeds (geddit?) and becomes a skilled bow-hunter. When smugglers come to his island, he takes them down using his archery skills, and returns to civilization determined to fight crime.

Look For: Wisecracking. A volatile love affair with fellow hero Dinah Lance, aka Black Canary. And on Smallville, anyway, whenever Queen assumes his Green Arrow persona, he uses a vocoder to disguise his voice.  Personally, I like to close my eyes and pretend that the muggers of Metropolis are being dealt swift justice by Laurie Anderson.