Accessibility links
We Have Liftoff: SpaceX Launches Test Spacecraft The launch marks the first time a private company has sent a space capsule into orbit and brought it back safely. And it provides a glimpse of the future of the American space program. 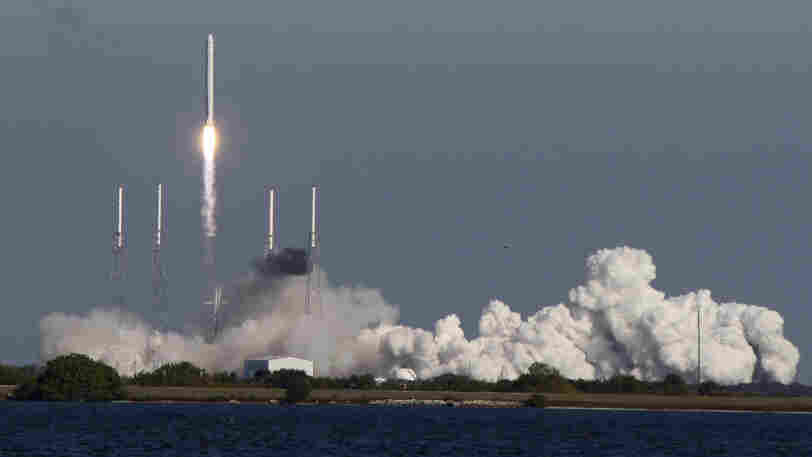 A company called SpaceX provided a peek Wednesday into the future of the American space program. The company's rocket, Falcon 9, lifted off from the Cape Canaveral Air Force Station in Florida, carrying a space capsule called Dragon. After orbiting the Earth twice, the Dragon capsule splashed down in the Pacific Ocean.

In the future, the Dragon -- or something very like it -- is intended to carry supplies, and ultimately astronauts, to the International Space Station, taking over the role of NASA's space shuttle.

Once the last shuttle is retired next year, NASA plans to rely on private companies to take cargo and ultimately astronauts into space. To encourage companies to get onboard, the agency decided to try something new: Instead of the aerospace giants, NASA invited in smaller, entrepreneurial companies to propose new launch systems.

At a news conference earlier this week, Gwynne Shotwell, the president of SpaceX, explained how her company was able to go from discussions to a launch in just four years.

"We don't have to do the 'mother may I' cycle with a huge number of organizations," she said. "We basically have a set of performance requirements that we have to hit."

"If we overrun this program, we have to come up with the money through investment to cover the cost -- which is dramatically different from taxpayers funding cost-type contracts," she said.

In cost-type contracts, the taxpayers are on the hook for overruns.

"Spaceflight is very, very difficult," he said. "And if history is any guide, there is undoubtedly going to be some anomalies as we go through the test program."

But on a beautiful, sunny Wednesday morning in Florida, the countdown appeared to be going swimmingly.

And then, trouble: Slightly less than three minutes before liftoff, telemetry indicated a problem with a launch safety system. Turns out, the telemetry was faulty -- not the safety system. So the SpaceX launch team regrouped and tried again. This time, there were no hitches.

Read About Photography From Space

High Resolution From The High Frontier

Photography On The Final Frontier

Falcon 9 climbed through the blue sky and wispy clouds over the launchpad. As the flight progressed, the word "nominal" was used a lot -- meaning nothing's happening beside what's expected. After nine minutes, the second state engine shut down.

NASA Administrator Charles Bolden said Wednesday's launch was a milestone in the history of spaceflight.

"Not because it represents anything that we haven't done before," Bolden says. "But it represents the entry of commercial entities, nongovernment entities, into access to space."

And for now, that's the direction the American space program is going.

With the space shuttle program ending this year, the Obama administration wants the private sector to take over transportation to the International Space Station. This controversial decision has drawn criticism from several space icons, including Neil Armstrong. The private company SpaceX has a contract with NASA to use its Falcon 9 rocket to carry cargo to the station. If the Falcon 9 test launch is a success, it could ease doubts about a private takeover of the flights. Here, a look at some of the structural differences between NASA’s space shuttle and SpaceX’s new Falcon 9.